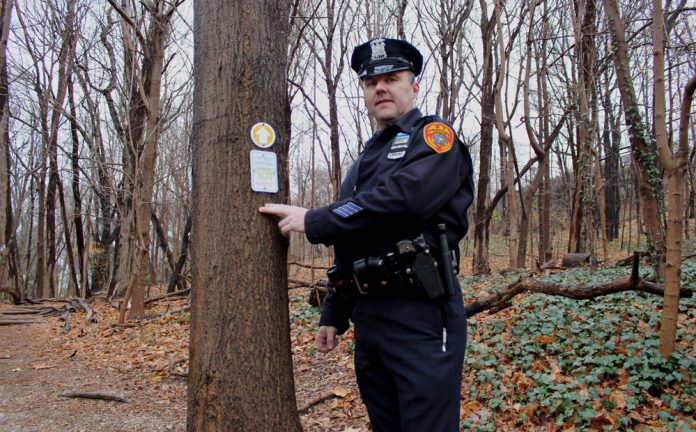 In June of 2015, a man fainted along the extensive 1.14-mile woods-surrounded walking trail path at Cold Spring Harbor State Park in New York. His wife called 911 for help, however, she had no way of telling dispatchers exactly where they were located. After a time-consuming search by emergency responders, the couple was eventually found and the husband transported to a nearby hospital.

Suffolk County Police Officer James Garside is also an Advanced Emergency Medical Technician who regularly patrols the area, and to him, this near-miss incident set off an internal alarm that something needed to be done to better help emergency response teams quickly locate injured hikers along this rough terrain path.

After receiving permission from his superiors to proceed, Garside contacted George Gorman, deputy regional director of the New York State Office of Parks, Recreation, and Historic Preservations (NSOPRHP), who assigned Leonard Krauss, facilities manager for Cold Spring Harbor State Park (along with two other parks in the area), to make these trail markers a reality. (Note: Krauss was also in charge of hiring the sign shops to make these signs.)

Garside and Krauss collaborated to try and decide on the information that would work best to display on the markers. Garside suggested that the signs avoid a cluttered layout; he explained that their appearance should be simple and clean and tell someone exactly where they are on the trail.

The fifteen identification markers that are used along the Cold Spring Harbor State Park trail path are actually two components—(1.) an upper circular piece provided by forestry supplier Ben Meadows featuring silver arrows pointing up and placed over a yellow background, and (2.) 3-1/2-by-5-inch aluminum trail marker panels overseen and produced by Dawn Tiritter-Bent, president of Signarama in Huntington Station, New York. Signarama printed the panels out onto 3M vinyl, adhered it to the aluminum, and applied a UV overlaminate.

The initial design called for only the park police’s seven-digit number to be included on the trail maker panel, but Garside persevered that the 911 phone number should also be included on them. “Technically it is the NYS Park Police’s jurisdiction, so their seven-digit number was going to be posted on the sign; but 911 is a universally recognized number,” he says. “With the Suffolk County Police Enhanced 911 System, even if you’re not able to speak to us, using a three cell tower triangulation, we can still find out your latitude and longitude.”

There were a lot of questions that Garside and Krauss had to answer during the initial stages of this project about how these trail marker panels would be presented along the path. For example, what materials to use for these trail markers—metal, plastic, or reflective 3M™ Scotchlite™?

Signarama made the trail markers out of .040-inch aluminum plate for both economic and durability reasons. Sixty trail marker signs were created (four for each of the fifteen trail marker numbers) to account for possible vandalism or theft.

Placement of the markers also had to be considered. Would they be located on a post, a concrete monument, or on the existing trees? In the end, the budget dictated their application to the trees.

The markers feature four 3/16-inch-diameter holes and were attached to the bark on two sides of each tree via 1.5-inch stainless steel nails. However park conservation ideals also played a role in their installation. “We were careful to avoid hammering the nails in all the way into the bark, so as to allow continued healthy growth of the tree,” says Krauss.

The trail markers are numbered sequentially from 101 to 115 in a bright-yellow font. Officer Garside’s initial suggestion was to place ten markers along the trail at 1/10-mile increments, so that the marker not only defined the location but the distance as well. But NYS Parks plotted fifteen instead.

“With the additional five markers, a hiker is never far from spotting one,” says Garside. “There are a lot of light-brown to medium-brown oak trees in the area, so the bright yellow numbers on the markers really make them stand out on the trail.”

Meanwhile the NSOPRHP had hired a GIS unit to come in and provide GPS mapping and longitude/latitude coordinates for the markers. “They also provided us with the appropriate spacing of the trail markers along the path,” says Krauss. “We worked with them as far as the multiple overlays and points where identification was necessary.”

The Cold Spring Harbor Fire Department then did a walk-through, identifying the best points of access for each marker (the north end, the south end, or even cutting through people’s adjoining property) to move the sick or injured person from the trail to the ambulance. “We know the latitude and longitude of all the trail marker signs,” says Garside. “This is particularly important for those who become sick or injured and are not on the trail. With Enhanced 911, we can see they are close to whatever trail marker is nearby and then start from there and work in that area trying to find them.”

In addition, the NYS Parks organization also took this new trail marker installation opportunity to update an existing kiosk located at the park. They agreed to print out and install a 36-by-54-inch double-sided trailhead information panel that would be beneficial to both emergency service personnel and hikers.

The map features area ecology provided by the state’s Regional Environmental Department, identifies property lines and large structures along the trail path, and provides coordinates for the new markers. “Once all the information was compiled onto a single map, NYS Parks then internally shared it with New York State Park Police, Suffolk County Police, and other emergency service entities that could be involved in responding to aided calls at the park for their input,” says Krauss.

A QR code is also printed near the top of the map. The barcode can be scanned, allowing users to download and then view the trailhead map on their personal electronic devices.

Due to prior work relationships on other sign projects for his parks, Krauss hired Fossil Graphics of Deer Park, New York to make this sign from phenolic resin. “We wanted a product that could be exposed to the elements over a long period of time and not be affected,” he says.

Accompanying 11-by-17-inch laminated maps of the trailhead were placed inside each of the fire department’s vehicles. “The fire department was even able to have the trail map added to their ESRI Explorer smartphones application,” says Garside. “Pressing a yellow trail marker on the screen will tell you the GPS location.”

Garside stresses that the mapping of the trail markers proved to be an integral part of this project. “Perhaps sign companies will consider this when installing signs in a similar situation—to either provide this service or outsource to another company,” says Garside. “The trail marker map was able to be shared on simple laminated maps, a smartphone application, as well as a mobile data terminal.”

While there have been several emergency calls made using the trail markers to report the location, the most critical call came on October 15, 2017 when a forty-seven-year-old man experienced a heart attack halfway along the trail. Unlike the June 2015 call, Garside and the Cold Spring Harbor Fire Department knew exactly where he was located and used a predetermined point-of-entry to the trail to be at his side within minutes of the call.

“There is little doubt how important these signs are. Critical minutes, even seconds, were saved and that played a significant part in saving this man’s life,” says Garside. 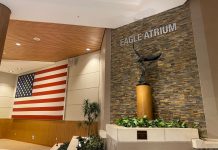 Curative Wayfinding: A VA Hospital Gets the Signage Treatment

A Worthy Wayfinding Cause