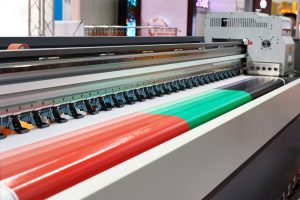 Advances in machine design and ink technology have arguably made UV-LED printers more versatile than other print systems, providing sign makers with opportunities to expand into a variety of market segments—from exhibit and display to vehicle graphics.

Another benefit is more flexible inks. Early generations of UV-curable inks were somewhat brittle and prone to cracking. However the once-brittle inks have improved significantly. Later generations of UV inks are flexible and durable enough for fleet graphics applied to vehicle surfaces with compound curves, rivets, and corrugations.

Compared to solvent and eco-solvent printers, UV-curable inkjet inks adhere to a wider range of substrates. In fact, you may have heard that you can print on virtually any type of substrate with UV inks. That sweeping generality definitely needs some qualification.

With UV-curable inks, it’s true that you can print on a wide range of flexible and rigid substrates, including pressure-sensitive vinyl, rigid vinyl, expanded PVC, polycarbonate, acrylic, polystyrene, polyester, polyethylene, polypropylene, metal, and glass. “With advances in ink chemistry, one ink system fits all print applications,” says Mutoh Director of Product Marketing & Education Mark Rugen, “but some substrates may require an adhesion promoter.”

The versatility and flexibility of today’s inks allows printers to print on a vast array of both porous and non-porous substrates. “This opens the door for printers to venture into new markets including labels, advertising specialties, backlit signage, custom wall coverings, and point-of-purchase displays,” says Rugen.

Solvent inks are designed to partially solvate or dissolve the outer surface of a pressure-sensitive vinyl film in order to chemically bite into it. Printed on board stock or other porous materials, solvent inks adhere to the substrate through absorption.

UV inks are 100 percent solids, but solvent inks are comprised of as much as 80 percent solvent. Solvent evaporation is an environmental problem, and it can also be a problem when printing on some media. On some substrates, like vinyl films, the solvent solvates the surface. As well as causing the media to soften and swell, strong solvent inks can cause some plastic films to shrink, warp, or crack. When the printed image is a bleed, solvents can result in edge lifting on plastic films.

Free radical UV inks don’t solvate the substrate and don’t bond by being absorbed. Instead, these UV inks anchor to a material mechanically, in much the same way as a pressure-sensitive adhesive does. After the ink is printed, it wets out and fills in the microscopic pores on the surface of the substrate, holding on for dear life as the ink cures and becomes a solid sheet.

Many of the new UV-LED printers feature white ink. Because UV-curable inks are 100 percent solids, they typically provide better opacity than solvent-based inks. This is a big advantage when you print on colored or metalized films because the ink has more hiding power, which helps prevent the background from overpowering the printed image.

The ability to print CMYK plus white is also an advantage when you’re printing subsurface on clear films. You can print a wrong-reading image on the second surface and then back it up with white before printing the background. This is ideal for printing backlit signage.

UV inks dry immediately following exposure to curing lamps, so inks do not bleed and there’s no dot gain. “UV systems can print a finer dot,” says Mark Rugen. “That results in sharper images and finer detail as well as a wider color gamut compared to other print technologies.”

Unlike solvent, eco-solvent, or water-based inks, UV-curable inks do not evaporate into the air. Instead these inks dry or “cure” instantly through a polymerization process initiated by exposing the inks to a certain spectrum and intensity of UV light.

Two of the key ingredients in UV-curable ink formulations are monomers and oligomers. Monomers are very small molecules that can combine, through a chemical process called polymerization, to form much larger molecules called polymers.

Monomers are classified as “reactive diluents.” Reactive diluents are materials that ink manufacturers use to replace organic solvents. In an ink formulation, the monomers perform the same purpose as a solvent, by reducing or thinning the viscosity of the ink.

But here’s the difference: Monomers don’t evaporate; solvents do. As the solvent in a conventional ink dries, it evaporates and these volatile organic chemicals (VOCs) get into the air, which contributes to air pollution.

The function of an oligomer in the ink formulation is different too. Whereas monomers are “reactive diluents” and perform the function of a thinner, oligomers are “reactive resins.” Just as a resin binds a paint or ink or vinyl film together, the larger reactive resins or oligomers of a UV-curable ink form the backbone of the molecular chain to which the monomers bond in the polymerization process. 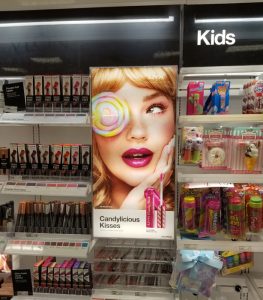 Monomer and oligomers aren’t the only components that comprise a UV-curable ink. The other components include photo initiators, pigments, and additives.

Photo initiators are the components that get the ball rolling in the polymerization process. When the ink is exposed to UV light, the photo initiators absorb the UV energy and break down into reactive components that initiate the polymerization process. Polymerization is the chemical process in which the smaller monomers and oligomers bond together to form the much larger polymer molecules. As the smaller molecules polymerize, they entrap the pigments, which give the ink its color and the additives in the cured solid inks.

One of the major benefits of UV inkjet systems is that the inks dry almost instantly after being exposed to intense UV light. Exposure to certain wavelengths of intense UV light initiates a chemical reaction, which cures or hardens the ink.

When printing with some UV inks, you should wait an hour or two before rolling up a print. Some UV inks can continue to chemically crosslink and cure for as long as three days after the initial exposure—making the inks harder and harder.

Mercury vapor lighting has been around for at least a century. UV inks were originally developed for this type of lighting, which emits a broad spectrum of UV light.

LED lamps generate a very narrow band of UV light, compared to the broader light band that mercury lamps produce. On the surface, this may seem a limitation. In fact, the UV-A light from LED lamps is very focused, capable of penetrating heavy ink deposits. The ink is more thoroughly cured and adhesion to the print media is improved.

As UV LED technology has improved and more manufacturers have entered this market space, prices have lowered, making these systems a more economically feasible option for sign makers.

UV-LED systems are not only much safer to operate than solvent or eco-solvent but also much safer than conventional UV print systems in the following ways:

No Harmful Light. Conventional UV curing lamps emit a spectrum of light that is damaging to a person’s eyesight. LED curing lamps are much safer. 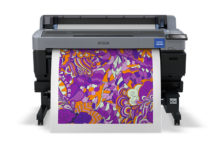 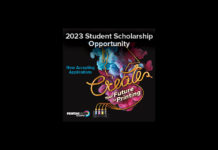