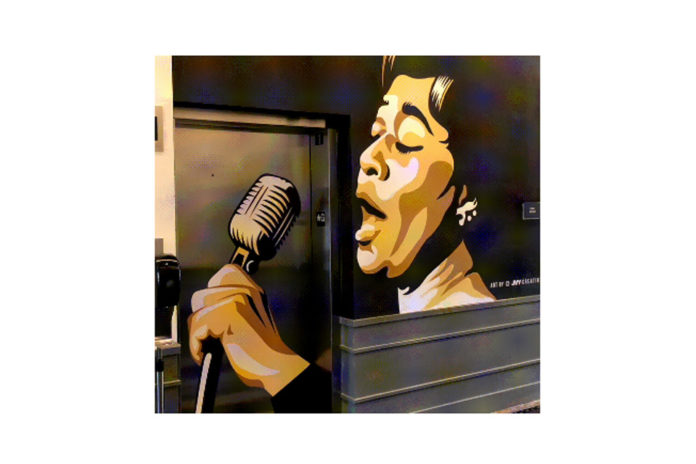 The Ella Apartments is a brand-new complex located in Richmond, Virginia that prides itself on mixing harmony with residential living and is appropriately named after legendary singer Ella Fitzgerald. Dubbed “The First Lady of Song,” the renowned vocalist used to sing at a nightclub across the street from the namesake apartments.

Walk into the ground level of The Ella Apartments and you’re going to notice three distinct murals inspired by Fitzgerald and the jazz stylings of her time. The even-more-eye-catching aspect of these three murals is that the architecture of the building played a role in each of their designs.

A bass player plays the downspout in a graphic by an entrance door in the parking garage. Fitzgerald brings a microphone closer to her mouth on the door of, what is dubbed by the residential complex, The Ella-Vator by the main entrance. Meanwhile the door of the Ella-Vator in the main corridor features a trombone player extending and retracting his instrument thanks to the opening and closing doors.

The behind-the-scenes artist who hit all the right notes and came up with the design and implementation of these creative murals for The Ella Apartments is Jake Van Yahres. This talented artist operates his single-person business, JVY Creations, in Richmond, where he has already been doing a fair number of murals around the city for three years now.

In fact, Van Yahres has been doing artwork as far back as he can remember and figures he came by his talents naturally. His sister was an artist, and his parents were landscape architects. (Note: Van Yahres is a really well-rounded individual, as he is also the co-owner of a tree care and preservation company.)

Not wanting to follow the “starving artist” route, Van Yahres put away his pens and brushes during college and pursued sports activities before making the move post-graduation into creative advertising art in Atlanta and San Francisco. He eventually started dabbling in the field of political advertising and then cartooning, turning plain yard signs into humorous statements for both candidates during the Trump-Clinton presidential campaigns six years ago.

These caught people’s attentions online and even made him a bit of a star on Reddit. He also garnered acclaim for his chalk drawing of intertwined black and white colors that he used to transform the crosswalk in Charlottesville, Virginia after the tragic death there during an out-of-control rally back in 2018.

Van Yahres also received attention for a mural of his favorite basketball player, Kobe Bryant, that he created out of paper balls made shortly after the athlete’s death. He soon found that his murals were becoming the number-one photos of the day on social media, as well as generating coverage on the national news (and even shared by Bryant’s widow Vanessa on Instagram).

“Eventually I started getting enough side [projects] where I didn’t have to work at agencies anymore, and I could start my own company,” says Van Yahres. “That was the beginning.”

Van Yahres became involved with The Ella Apartments when a good friend of his (who also happened to be a developer on the project) approached him and put a bug in his ear about the need for murals at this new location. Van Yahres and his friend ended up scouting possible spaces where he could do the murals while the complex was still under construction.

While surveying the location, Van Yahres knew that his interspersed murals needed to be put in places that people would actually see them.

One thing Van Yahres always tries to do with his artwork—whether it’s a logo or a mural—is to incorporate some sort of “a-ha” twist with them. “There’s always a concept where you kind of have an ‘a-ha’ moment,” he explains. “Think about the concept of the FedEx logo with the arrow in it pointing right. So all my artwork will feature that ‘a-ha’ component to it.

“The apartments are named after Ella Fitzgerald, so obviously any art piece I was going to do would incorporate her in some way.”

A lot of times Van Yahres will take a picture of the space and then start sketching in order to arrive at the concept. The downspout in the parking garage proved instrumental to Van Yahres as he envisioned his painted bassist playing it.

Van Yahres takes his sketches and imports them into a computer for further designing. “For this design, I used Adobe Illustrator,” he says. “I took all the measurements, so I knew exactly how big the space was that I was working with, so I can put that space into the computer and work off that.”

Once that design is ready, Van Yahres will use a projector to place the image onto the wall and start sketching it out with chalk. This gives him a good idea of what something will look like before it goes up fully. “Then I’ll come back and paint to where the chalk marks are,” he says.

Van Yahres really unleashed his creativity further with the other murals. Because of the open-and-close doors for one of The Ella-Vators, he knew it would be perfect for Fitzgerald to be singing into a microphone here, as the door brings it closer to her mouth.

The trombone player on the other Ella-Vator was a bit more challenging for its location and its theme. “The space ended up not being exactly where we thought it was going to be,” says Van Yahres, noting that the original idea was for it to be placed outdoors.

This was again going to repeat the Fitzgerald-singing-into-the-microphone motif, but Van Yahres wasn’t thrilled to repeat the same design twice. Instead he decided to brainstorm other kinetic, motion-oriented instruments and sent his idea for a trombone player instead to his friend, who quickly approved it.

“It’s a good thing that I did [the murals] in stages, because if I was just doing it all at once,” he says, “then I would have done the same mural twice.”

Van Yahres completed the first mural in a couple of days in the middle of December. For each of the Ella-Vators, he had to get special permission to be able to set up and work.

“The first mural is right next to a parking lot, so I had to cordon off the parking spaces to prevent anyone from parking there,” he explains. “And then when I was doing each one of The Ella-Vators, I had to work with management’s schedule just a little bit to shut the elevator down so I could work on it. I couldn’t just do it anytime I felt.”

The second mural Van Yahres painted in a couple of days after Christmas, and then he finished the third mural a week later over a three-day period.

Van Yahres utilized house paints bought at a paint store for the murals. He used two full cans of black paint and then a quart each of the remaining colors. Perched on a ladder, he started work at the top and then moved down to the bottom. “That way, I knew my hands were never going to smear the paint,” he says.

He did one color at a time, applying three coats of each color. “I wanted them to look really sharp and super crisp,” says Van Yahres, noting that he just touched up all the lines at the end.

The graphics on the elevator door are actually vinyl. Van Yahres contacted a sign shop in Richmond to print them out for him. “It was a little bit of a process to match up the paint with the vinyl on the door,” he says.

Van Yahres made the exact process simple for the shop—supplying them with the image file that was the exact size he needed with the exact colors. Van Yahres also sent them a design of what it would look like when he was done so the shop could visualize it better.

“I tried taking the work out of their hands as much as I could,” he says, noting that he simply picked up the adhesive-backed vinyl graphic and directly applied it to the elevator door using a dry installation method.

Van Yahres finished painting the mural before applying the vinyl to the elevator doors. “I wanted to make sure that I got the colors right for the last Ella-Vator though,” he says. “So I actually put the vinyl up first and then matched the paint colors to that vinyl because there’s a purple in that one.”

Reaction to the murals both during painting and afterwards has been nothing short of incredible. The images for this project appeared on Reddit and again went straight to the top of their design page.

“Ella Fitzgerald used to play at a club right across the street, so it was cool that there was real meaning to these murals,” says Van Yahres. 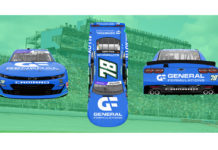