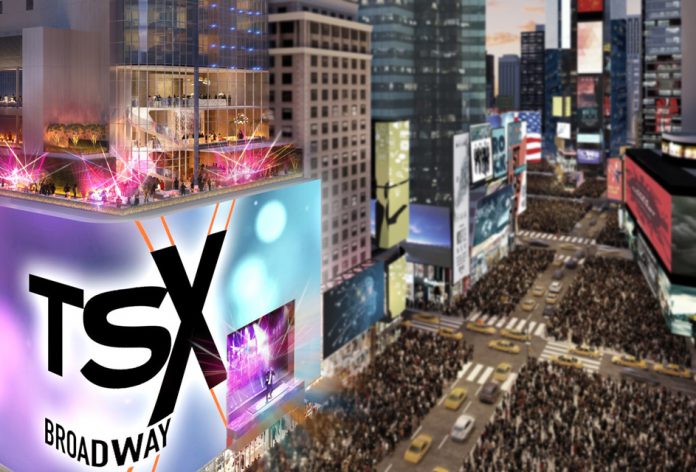 TSX Broadway, a forty-six-story mixed-use development located at 1568 Broadway, sits directly across from the iconic Red Steps in the heart of New York’s Times Square. The tower will include 669 hotel rooms, 75,000 square feet of retail space, and 30,000 square feet of dining, including a 10,000-square-foot outdoor terrace (the largest in Times Square).

The building will feature a nine-story main screen that will wrap around the skyscraper at the southeast corner of 7th Avenue and 47th Street. The MEGA-SPECTACULAR display system will feature a 4,000-square-foot stage suspended 30 feet over 47th Street, allowing entertainers to perform from “within” the video wall. It is the first and only outdoor stage in Times Square.

Sensory Interactive directed the procurement process for the owners and is also providing design development and project management services for the building’s comprehensive promotional platform. In addition to the building’s digital displays and outdoor performance stage with sophisticated streaming capabilities, this platform includes an integrated system of façade lighting that will create a dramatic, forty-six-story canvas for the world’s biggest brands.

“The sheer size and scope of the TSX Broadway main screen will definitely turn heads,” said Dennis Hickey, president of SNA Displays, which is headquartered in Times Square just a few blocks from the new project site. “But the stage incorporated into the display is what’s going to separate TSX Broadway from other MEGA-SPECTACULAR™ displays in the industry. It’s a trend-setting design and we’re extremely happy the ownership team is putting their confidence in our organization. We’ll make this a great partnership.”

The display system will include several LED assets from SNA Displays’ Empire™ line of exterior display products including the main screen, a stage marquee, the stage doors, a large-format display mounted midway up the building façade, and a first-of-its-kind digital display crown extended above the roof of the building.

In total, the project will include 22,350 square feet of LED canvas and 28 million pixels, making TSX Broadway the highest-resolution display system in Times Square.

With 8K Ultra-HD processing, the building’s main screen will be built to accommodate the next generation of video and broadcast media content. 8K UHD represents 16 times the resolution of high-definition (HD) and four times that of 4K. All signal processing from the media servers to the display will be frame-accurate, allowing for a flicker-free, stunning-quality viewing experience.

The project is another high-profile award for SNA Displays, which has extensive experience in the Times Square market. SNA Displays manufactured and installed the wrap-around MEGA-SPECTACULAR at 20 Times Square, currently the highest-resolution LED display in New York City.