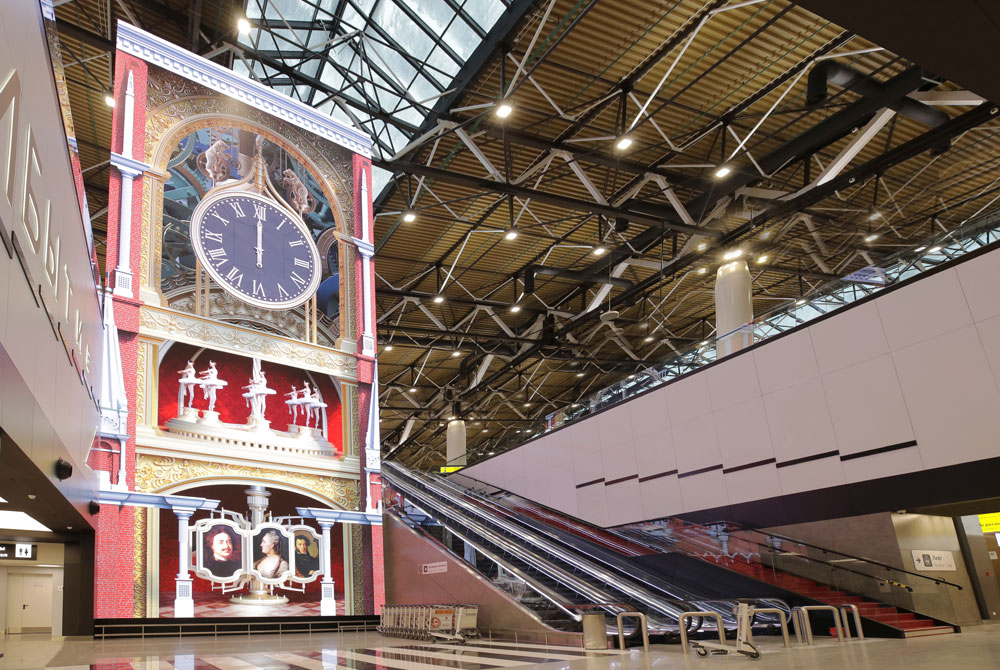 Among the largest and busiest of Russia’s airports, Sheremetyevo International Airport in Moscow serves tens of millions of passengers and sees hundreds of thousands of tons of cargo passing through each year. To entertain an influx of visitors, Sheremetyevo recently undertook an enormous modernization project that involved the demolition of the airport’s original Terminal 1 and the construction of an entirely new transportation hub, Terminal B, in its place.

For all the above, Sheremetyevo turned to LG Business Solutions and its world-class reputation for delivering truly unique digital signage experiences. As a one-stop shop that can provide customers with a wide range of digital signage products as well as installation and troubleshooting services, LG helped Sheremetyevo consolidate and simplify the workflow for Terminal B’s construction.

“Sheremetyevo Airport wanted to build a brand-new terminal with an innovative digital signage concept in a relatively short period of time. We worked closely with the airport to comprehensively help them address their needs, from pre-sales support to installation and troubleshooting,” said Grigory Astafiev, Key Account Manager, LG Electronics Russia.

LG only had one and a half months to install hundreds of digital signage products, and they were more than ready for the challenge, swiftly installing and troubleshooting each piece of digital signage in time to greet Terminal B’s first passengers.

Towering above the masses

Sheremetyevo Airport required a piece of digital signage that could serve as the focal point within Terminal B as well as a landmark not only for the airport, but for Moscow as well. LG recommended the installation of a massive four-sided direct-view LED signage totem display, strategically placed to be seen by everyone heading up to Sheremetyevo’s departures hall. By far the largest single piece of digital signage in Terminal B, the LED signage totem rises two stories up from its base and the escalator next to it allows passengers to take in its enormous scale up close.

Made up of LG’s high-brightness LAS series digital signage displays that provide up to 1,000 nits of brightness, wide viewing angles, and reliable 24/7 operation, the LED signage totem stands out from the rest of the terminal’s architecture to display intricate animated clock towers, Russian cultural showcases, and advertisements for travelers approaching in all directions.

The LED signage totem was a demanding challenge to install and set up. A custom frame with an incorporated air-cooling system first had to be constructed. Each individual LED unit had to bear extremely stringent manufacturing and installation tolerances to ensure that there would be no visible gaps between them to form a seamless four-sided screen that presents passengers with ultrabright high-resolution visuals with true colors.

“From the very beginning, Terminal B was designed to be the most technologically innovative transportation hub in Russia. We worked closely with LG to implement many interesting new ideas, including, modern advertising technologies and cutting-edge media design,” said Andrey Grushko, Deputy General Manager, Sheremetyevo Advertising Company.

Blurring the line between digital signage and art

Designed in the avant-garde style of early 20th Century Russian constructivists, the new Terminal B features bold architectural stylings with stark colors and sharp angles. The digital signage within the terminal’s halls needed to be as eye-catching as the structure in which they reside and provide passengers with a unique Russian cultural experience as they wait to depart. Building on the constructivist design philosophy, Terminal B has two digital art sculptures inspired by the Proun drawings and paintings of El Lissitzky, a Russian avant-garde artist.

Titled “Circle and Cube,” this installation creatively integrates art and cutting-edge technology. Multiple LED units were set within custom frames to create circular LED screens as well as square LED screens mounted in cube form to offer passengers a uniquely Russian synchronized media experience unlike any other digital signage anywhere else in the world.

Shaping every moment – from arrival to departure

Sheremetyevo, impressed by the quality of the LG Flight Information Display Systems (FIDS) already installed in its other terminals, worked closely with LG to make sure that passengers would be within sight of LG digital sig 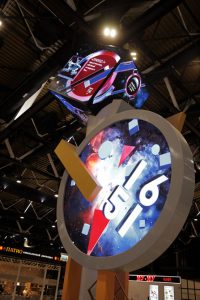 nage every moment they are in Terminal B.

For those arriving at Terminal B, passengers are guided to the correct baggage carousel by unique, freestanding displays composed of 49-inch webOS signage mounted on top of 86-inch 4K UHD signage displays. Designed for maximum visibility, the UHD screens display colorful airport information and advertising videos at ultra-high resolution while the webOS signage informs passengers of where to pick up their luggage.

When departing, passengers are guided to the proper check-in counter by 49-inch webOS signage displays hanging above each ticket agent. Capable of self-playing content without the need to install a media player, webOS signage simplifies operations while also delivering the right information at the right time. LED advertising screens, offering wide viewing angles and up to 1,000 nits of brightness, mark the path through immigration and duty-free. These displays provided Sheremetyevo with amazing flexibility in deploying digital signage, with advertising screens of all sizes slotting perfectly into where they were needed regardless of space constraints.

LG FIDS are strategically placed throughout Terminal B. Both LED and webOS FIDS are designed for durability and 24/7 operation to make sure that passengers don’t miss their flights. Especially striking is the 42-square meter FIDS that greets passengers in the departures hall. Made of multiple bezel-less LED units grouped together, this FIDS’ massive scale allows Sheremetyevo to display a large amount of flight information at once, minimizing the amount of time passengers must wait to see their flight’s status.

“This project was the biggest and most impressive installation of digital signage in the Russian transportation industry. Reliable product quality was very critical. For this, LG was the best partner we could have had, thanks to its global reputation as a leader in the digital signage industry,” said Ludmila Ignatova, General Manager, Tegrus (LG system integrator partner).

Despite the extremely short timeframe for installation and troubleshooting, each and every piece of LG digital signage within Terminal B has been operating beautifully from the get-go. LG’s FIDS operated reliably, providing passengers with flight information. Sheremetyevo was more than pleased with the results.

“The equipment we received perfectly meets our needs, and we are very pleased to have worked with LG. Every day, we can see the ‘wow’ factor the LG digital signage displays provide our passengers,” said Kirill Kulikov, Head of IT infrastructure, Sheremetyevo International Airport. 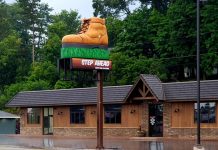 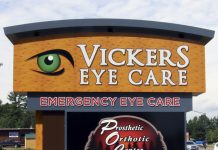 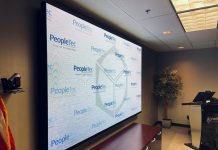