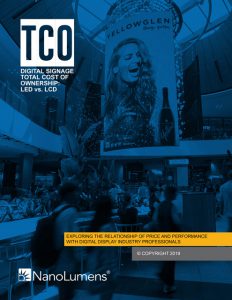 The future of LED displays has never been brighter as AV integrators, designers, and end-users come to understand how to better assess the total cost of ownership (TCO) of LED and LCD solutions, according to the results of a recently completed online industry survey of 454 LED display customers conducted by NanoLumens, award-winning creators of LED visualization solutions.

According to NanoLumens Vice President of Global Marketing and Business Development Joe’ Lloyd, AV integrators accounted for 50 percent of the survey participants, with architects, designers, and end-users comprising the other 50 percent of the respondents. The twenty-four-question survey, conducted between November 2018 and February 2019, aimed to reveal how perceptions about LED and LCD display technologies compared among industry professionals, what their experiences with each technology were, and what they thought the future might hold for each display format.

“The results of this survey indicate that display industry experts assign primary value to longevity, durability, adaptability, and performance,” Lloyd said. “But their customers still primarily value the opposite—price over performance—which is understandable given the fact that LCD displays are still the more common solution in the marketplace.”

According to Lloyd, once respondents moved beyond the consideration of initial purchase cost to the more complex issues that determine the total cost of ownership over the life of the display, a more nuanced picture emerged from the survey.

The Seriousness of Service

“While LED displays—at least those built by NanoLumens—are composed of interchangeable and interlocking subcomponent boards, LCD displays are not,” Lloyd stressed. “This means that repairs for LED displays are much more likely to be quick fixes with spare parts rather than the wholesale replacements often necessitated with LCD malfunctions.”

Already more expensive than LED part swaps, LCD monitor replacement is further complicated by the tendency of LCD manufacturers to sunset old model lines. “While LCD manufacturers often enact sunsetting policies to keep their plants rolling out only the newest display lines, LED manufactures avoid having to do this because the lifespan of their displays is a lot longer,” Lloyd asserted. “A like-for-like part replacement is thus viable in an LED display system where it is not in an LCD system.”

The survey also revealed that the highest ranked cause of LCD replacement is a loss of brightness. “This is damning for LCD displays because LCD technology is already far dimmer than LED technology to begin with,” Lloyd explained. “When a product starts out with a clear disadvantage in one noticeable area and then experts later cite worsening of that issue as their chief reason for replacement, perhaps the disadvantage is more than just a weakness. In fact, in certain applications it’s a disqualifier.”

To wit, nearly every outdoor display is of the LED variety. Indoor areas with challenging ambient light conditions have begun the transition to LED as well. These venues know that a dim display blends in with its surroundings, and if a display can’t demand attention from distracted audiences, what purpose is it serving?

As to the future, experts seem to predict that the LED share of the market is going to grow dramatically in coming years, and that price drops will lead the way. “A declining price point will obviously boost LED sales, but that’s really not the point,” Lloyd stressed. “The point is that, based on their own responses, LED displays already offer a better total cost of ownership when every element of the purchase is looked at. Experts acknowledge that LED displays require service less frequently, last longer, and perform better.” 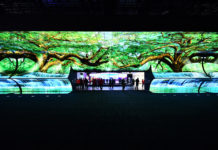