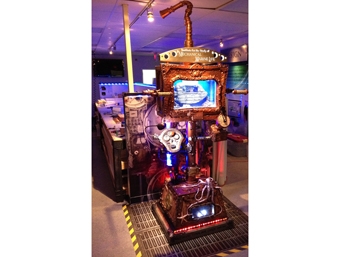 What stands eight-and-a-half feet tall, weighs nearly 500 pounds, features HDU, acrylic, and PVC, and sits in the workshop section of a sign shop’s office with real and mechanical fish swimming inside it?

The answer is a 360-degree, 48-inch-wide-by-30-inch-deep sculpture designed and built from scratch by sign makers eager to show off their highly creative skills to customers and fellow sign artists.

The challenge involved creating a 3-D sign with only two requirements: It had to (1.) include the name “The Institute for the Study of Mechanical Marine Life” somewhere on it, and (2.) feature a mechanical fish of some sort.

Hamilton and Hoey were already devotees of Sawatzky’s creative 3-D work and had taken his classes before. “[This contest] was perfect timing, as some people had been contacting us for this type of large-scale work,” says Hoey.

Once they received approval to enter, the contest was already well underway. Hoey and Hamilton only had a month-and-a-half to channel their inner Captain Nemos and submit an entry.

They knew they’d be competing against some of the best sign makers around, so they immediately started brainstorming something “smoking hot” no one had ever seen before; they also wanted to do something that would showcase all their shop’s talents—graphics, metals, sculptures, etc.

Initial sketches produced a “mechanical fish” idea. Hoey suggested a little fish inside this mechanical fish to show the inter-workings.

The story they developed after only a couple of hours: “A little clownfish too scared to travel builds himself a mechanical fish out of driftwood to tool around the ocean in [so as] to stay safe. The only way to find him is by using the periscope designed for ‘The Institute for the Study of Mechanical Marine Life.’”

Hamilton proposed incorporating a fish tank somewhere, as well. However the shop wanted to do something cooler than just an ordinary aquarium. The extraordinary solution: Make it part of a periscope.

Engineering the “wooden” mechanical fish wouldn’t be problematic, as KDF Custom Graphics (www.kdf-comp.com) has plenty of experience designing this kind of work. In fact, all six of its well-rounded employees boast highly creative skills. Located in Rockleigh, New Jersey, they are far from operating as a “traditional” sign shop. “Most of the time, if someone comes to us, it’s because another sign shop isn’t able to do the job for them,” explains Hoey, noting they started out as a reprographics company and evolved into tradeshow graphics, vinyl-mounted foam, and custom acrylic displays.

While Hamilton was fabricating and welding the steel frame armature for the sculpture, Hoey was designing the basics and textures of the mechanical fish in EnRoute Pro.

KDF carved the “wooden” mechanical fish out of one-and-a-half-inch-thick thirty-pound Precision Board PBLT HDU using their MultiCam 3000 CNC router. They employed a 3/8-inch Ball End Mill for the rough pass and a 1/4-inch Ball for the finish pass.

Meanwhile Hoey created the clownfish “pilot” to be inserted inside the mechanical fish using Magic Sculpt epoxy clay. Since real clownfish were also going to be swimming around in the tank, Hoey avoided making his model fish “too cartoony.” Once setting up a post to sculpt around, he started adding the face in order to have “scale and character to work around” and then moved on to the body where he added further texture and detail. (Note: Sculpting and textures throughout the project were done with a spackle knife, a pencil point, a pencil eraser, etc.)

While this was going on, Hamilton was building the fish tank from scratch. He cut the panels out of 1/2-inch- and 1/4-inch-thick acrylic with the MultiCam 3000 and a table saw and injected them with resin bond to weld the edges. Hamilton screwed some MDF to the router table to keep the acrylic blocks in place. Cutting these pieces took about half an hour.

Two-inch-thick acrylic was used for the seated acrylic base that holds the fish tank snugly in place. “This might’ve been overkill,” says Hoey, “but it definitely made for a cool custom acrylic fish tank tray.”

Once the tank was together, KDF drilled holes and prepped for the pump hoses. Hamilton then set the clownfish pilot inside the mechanical fish piece via an acrylic rod.

KDF cut rough blocks of HDU for the stone base. Hoey and his shop are big fans of Lord of the Rings and Game of Thrones, so he carved Gaelic proverbs in this style of calligraphy around the base.

Hamilton welded a basic frame at the base and added a 4-1/2-inch-wide steel pipe to be able to hold the weight of the upper fish tank. He cut the pipe in half and clamped it, making disassembly in the future much easier. The middle pipe comes all the way up to a steel plate. (Note: To view this construction process, visit www.signshop.com.)

Hoey routed the base panels atop the stone slab to resemble a treasure chest. It too was made from one-and-a-half-inch thirty-pound Precision Board and later hand-carved to age the “wood” and “metal” in an effort to give each of the four panel its own character.

“We first cut the bottom side out of one-inch Precision Board and used a hatch fill to remove a 1/2-inch pocket all around so that the piece would fit snugly over the sides of the box,” explains Hoey. “Then we routed a 1/8-inch-deep seat on the spoilboard to hold the inside part of the cut piece.”

Once the piece was set in place, Hoey added routed texture to the other side. “We cut the piece in half, so one side would be removable,” he continues. “Once in place, we added wrought iron metal over the seams so no one will know the panel is removable.”

(Note: Hoey cut the porthole of the base out of acrylic separately, painted it, and mounted it to the treasure chest with Magic Sculpt.)

After adding the octopus and sea urchin to the top of the treasure chest via Magic Sculpt, Hoey noticed they still had some room left but didn’t need anything “crazy-busy,” so they opted for a translucent purple that stood out nicely.

In fact, many of the custom components found throughout were actually designed on the fly—crabs, seahorses, starfish, gearshifts, etc. Hoey would draw up 3-D designs in EnRoute Pro, while a slab of Precision Board waited on the router table. “We knew it needed to have lots of color and fun elements, since it could be viewed 360 degrees,” says Hoey, noting that they also added barnacles along the base with Magic Sculpt.

The control panel that operates lights and gears resembles a shell. Two pieces of steel tubing make up the armature of its arm, and KDF drilled a few holes in them to run their lighting that would be added later.

Its mechanics were conceptualized and pieces all cut in one night. “Then we put it aside so we could add things like switches and panic buttons later,” remarks Hoey.

KDF reverse-printed the “full-speed-ahead” gear onto acrylic via its Océ Arizona 350XT flatbed and inset it into a two-inch piece of router-carved Precision Board. “It’s an actual working piece,” says Hoey. “You can move it to ‘half,’ ‘slow,’ ‘stop,’ etc.”

The periscope is constructed entirely from PVC pipe. Hoey crafted the rivets using Magic Sculpt. “It’s not all perfectly straight,” he comments, “but we did that on purpose.”

However Hoey felt there was still something missing from this portion. While drinking a cup of coffee, inspiration hit him. “I stuck the cup on there and used a little Magic Sculpt on the outside of it!” he says. (Note: Hoey wanted to get KDF’s name somewhere on the sign but not in a place that was quite so obvious, so he carved it via the router onto the top of the periscope box.)

Hoey and Hamilton also added the names of their children to various parts of the structure. They might look like engraved steel, but they were actually printed via the Océ Arizona 350XT flatbed onto plaques and sign panels cut out of .060-inch aluminum.

The entire sign is made out of fifteen- and thirty-pound Precision Board and Magic Sculpt, except the thin “Institute” nameplate piece; it’s actually PVC. “The lettering was actually printed out and attached to it,” remarks Hoey.

An aquatic-themed “metal” box sits nicely over the acrylic tank shelf without the need for any mechanical fasteners. “We had set a PVC seat inside the canopy walls about four inches from the bottom to be able to do this,” explains Hoey.

The finished piece was designed in sections that can come apart, if needed for future moving. “We set the steel structure in place and leveled it with legs,” explains Hoey. “Then we started putting the components over it.”

As for lighting, the LED modules inside the bottom of the tank (as well as those lighting up the cabin and the button eye of the fish) are immersible. Meanwhile standard LED strips backlight the sign, decorate the stone base, and accentuate the water return on the back of the tank that resembles a lightsaber.

A little manual pull rod placed on the front of the tank allows people to open the door of the mechanical fish and peer inside to view the clownfish driving. The door has a wire connected to the front of it that goes up through the top of the tank to a pulley system and then comes down when pulled.

KDF primed everything with Precision Board primer and then brush- and spray-painted everything with acrylic paint. “I added a Polygen coating to the sculpted fish that allows it to rest in the fish tank without the paint outgassing and killing the real clownfish in there,” says Hoey.

Hoey also credits KDF Reprographics and Logistics Manager Eddie Cheung for being the resident “fish tank expert” and making sure no fish were lost. An attached auto-feeder dispenses a little bit of food every day, and the PVC periscope unscrews, allowing them to pop off the top and change out the water a couple of times a week.

Hamilton, Hoey, and the KDF Fabrication Assistant Mark Pilcher worked on this project entirely after hours (with Pilcher helping out with cutting, painting, and assembly). “It’s amazing how much work you can get done when the phone isn’t ringing!” says Hoey.

At press time, contest results weren’t official, but that’s not keeping KDF from looking forward to participating in another one of these creative exercises or applying the ideas they learned here for other customer projects. “We loved doing it!” states Hoey. “It’s also wild to watch others come up with something cool.”

Note: To view a video of this project, click HERE.