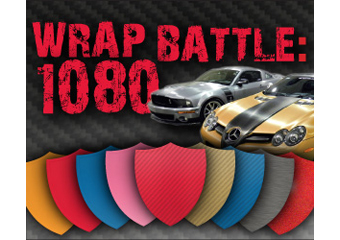 3M Commercial Graphics recently hosted the Wrap Battle:1080 contest on its Facebook page to choose the next color and finish for the 3M™ Scotchprint™ Wrap Film Series 1080. The Film series 1080 is a long-term, removable, dual-cast film that offers graphics installers virtually bubble-free applications.

After compiling over 500 Facebook fan votes, the overwhelmingly majority selected Brushed Black Metallic from the nine color/finish contenders. The new film will be available in January 2012.

Brushed Black Metallic received more than twice the votes of the second place finisher. The breakdown of the 554 total votes in the contest is as follows:

In the US, Evan Chan of La Habra, California was the winner of a free roll, while Craig Stratton of Mount Pearl in the province of Newfoundland and Labrador was the winner in Canada.

“We are constantly evolving and improving our products to give our customers what they want,” said Doug Blackwell, business development manager for 3M Commercial Graphics. “This contest allowed us to communicate directly with users of our products, and we are thrilled with their response. Brushed black metallic will make an outstanding addition to our line.”