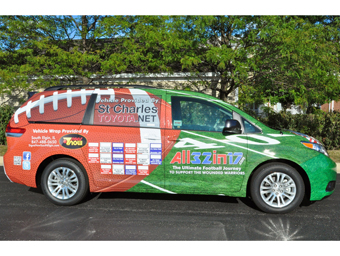 When Simon and Gretchen Nussbaum, owners of Signs Now South Elgin in Elgin, Illinois, were approached by St. Charles Toyota to donate a vehicle wrap for use in the “All32in17 Ultimate Football Journey for Wounded Warriors,” they jumped at the chance to be a part of such a special project.

The father-and-son team of Craig and Matt Steichen created a very unique way to honor the nation’s military heroes. Their “All32in 17” project has been traveling to locations across the country taking two different Wounded Warrior Veterans to each of the NFL’s thirty-two stadiums for a home game. The veterans are always local heroes from each respective city. The project has been garnering national attention and was featured on a story on ESPN’s “Monday Night Countdown” on Monday, November 12.

As part of the project, the Steichens planned to drive to at least ten of the stadiums and worked with St. Charles Toyota for a donation of the use of a 2012 Toyota Sienna. Keith Lanzara, St. Charles Toyota Business Development and Marketing, then contacted Signs Now to see if they would be interested in donating the wrap materials and installation.

“When I first contacted Signs Now South Elgin, without hesitation, Simon agreed it was for a great cause and wanted to be part of it,” explained Lanzara. “The vehicle wrap looks amazing and since partnering with Signs Now, they now handle all of our dealerships projects as well.”

“I was excited to do the project because I felt like our soldiers coming home weren’t getting a lot visibility,” remarked Nussbaum. “Anything we could do to help the cause was well worth it.  After considering what our troops put on the line, a little time and money on our part was inconsequential.

“Add that it was football-related and everyone at our facility was excited with the project. I think really put the extra effort into producing a great vehicle wrap.”