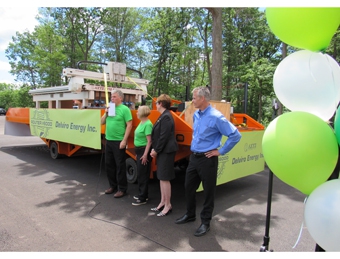 AXYZ International, a leader in global CNC router manufacturing, is proud to announce the delivery of its 6,000th machine. The company first started making CNC routers at its Burlington, Ontario facility in October 1994. Currently, AXYZ builds in excess of 400 machines per year for their customers around the world.

Still going strong after 23 years, AXYZ celebrated this milestone production achievement at its recent AXYZ Router Table 6,000 Event held at the Burlington, Ontario plant on June 21, 2017. During the event, Delviro Energy, Inc., the customer who purchased the 6,000th table, was acknowledged. In addition, AXYZ employees were recognized and treated to a BBQ.

AXYZ International has a unique way of recognizing its employees. “A lot of companies talk about the length of time their staff have worked for the business in terms of how many silver and gold anniversaries there have been or how many twenty-five- and fifty-year employees they have,” said Greg Jenkins, vice president of Sales at AXYZ International. “We recognize the longevity of our staff by how many machines were manufactured in the time employees have been with the company.”

AXYZ has a celebration for every 1,000th machine produced. This recognition process began when machine number 1,000 was completed. “It’s really a celebration of the business and the staff that work inside our plant. Every business depends on its employees for its success. We recognize our employees because it’s significant, and we value their contributions to the company,” said Jenkins.

Whether the employees have been with AXYZ for 50 machines or all 6,000 machines, they all are recognized at AXYZ celebration events.

The ABCs of 3D: Succeeding at the Art of 3D Printing