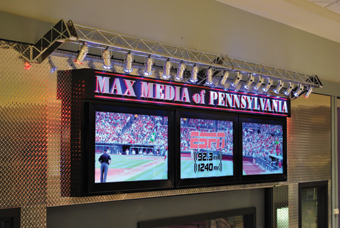 Thanks to “competition” from mobile devices and the Internet for the attention of today’s audience, the new owners of the Pennsylvania branch of broadcast media group Max Media, LLC realized that they needed to employ innovation of some kind to grab listeners.

Their solution: Open up a brand-new broadcasting studio space inside the Susquehanna Valley Mall in Selinsgrove, Pennsylvania. Their reasoning: This opportunity would allow the walk-by public to notice the Max Media name while being able to view actual, on-air radio broadcasts.

And such a set-up would require innovative signage as well, and this turned out to be a job for family-owned Ace of Signs, LLC also of Selinsgrove. The concept they realized and provided for Max Media officials also led to First Place in our 2011 SBI Sign Making Innovation Award contest, as determined by online voting.

Don’t touch that dial, as we tune into this unique signage project!

Ace of Signs had done some sign work for Max Media a few years back, and it still stood out so much that the new general manager knew the shop would be perfect in fulfilling this latest signage request.

Solutions devised and implemented for this project included: stage lighting simulating the sense of watching an artist on-stage during a concert, GoBo projectors projecting logos or messaging onto the back wall of the studio, and three forty-six-inch Samsung LED television displays broadcasting a “live performance” feel.

“When challenged with the goal to turn a non-visual media into an extremely visual media, [we] created signage that successfully fulfills that need—as well as integrates the station’s multi-layered platform of using not only audio on the station broadcast but also video messaging and live client display/demonstration/sampling within their studio space,” says Eric LaFore, owner and partner of Ace of Signs. (Note: Eric’s parents Dave and Kathy Ginley founded the company in 1996, and he has been involved with the business ever since graduating from high school the same year.)

There are three radio stations operating under the Max Media umbrella in the Susquehanna Valley area—a top forty station, a country music station, and an ESPN Sports Radio affiliate. “The owners wanted to use a single sign at this new studio facility that would work for all three stations,” remarks LaFore.

The initial idea was to just put some TV sets up on the sign face and go from there, but LaFore knew this solution wouldn’t fly with mall officials. “The mall has a strict guideline on what they want their [interior] signs to look like,” he explains. “According to management, an animated sign on a storefront inside the mall had never been done before.”

After some back-and-forth conversations with Max Media, Dave Ginley sketched out a rough pencil draft that instead encased the TV screens inside a black rectangle cabinet. LaFore then turned this concept into computer drawings. “Two months of the project were held up in the sign getting approved by the mall, because they weren’t too thrilled initially on the thought of TVs,” says LaFore. “They were afraid it would look like TVs stuck on the façade.

“But once they saw the ‘built-in’ look of the one-inch-thick TV displays, they were fine with that solution.”

Although Ace of Signs boasts previous experience working with electronic message centers, LaFore admits this is the first time he and his company had ever attempted to put actual LED televisions inside a sign—let alone three of them, as this project would require.

Content (logos, progams, information, etc.) on each of the three TV displays can be the same on all sets or each one can have different images (both static and streaming). Ace of Signs had a custom computer built by MePush Technology Solutions of Lewisburg, Pennsylvania, so an in-house Max Media employee can use Display Fusion Pro software to manage these graphics and content. “When the ESPN station is broadcasting inside the mall, an ESPN logo will be on one screen, the disc jockey on the other screen, and a sports event on the third screen,” states LaFore.

The TVs are hooked up to the Internet, to cable, and to the special software that runs the graphics. This set-up allows content to be a bit more topical whenever the need arises.

For example, a few months ago, Tropical Storm Lee visited the region and brought widespread flooding with it. “Max Media was able to show mall-goers local news coverage of the flood on the TVs,” says LaFore.

To really build up the radio stations’ broadcasts as an event, LaFore also drew up the idea of using color-changing LED cove lighting to simulate a concert-type effect. “Since two of the radio stations play music and the disc jockey can be seen through the window beneath the sign doing his job, it just made sense to give the sign presence a more music-entertainment type of feel,” he explains.

LEDtronics PAR38 LED spotlights are housed on an aluminum truss system positioned above the electronic sign panel (similar to what you’d find at a concert venue). “[Mall officials] originally rejected the idea of a truss system to house the lighting. They instead wanted to do push-thru backlit acrylic letters or a halo-lit channel letter,” says LaFore. “But I managed to convince them that this wasn’t the look and feeling we were trying to capture here.”

Ace of Signs went to a local music store and purchased actual stage lighting equipment to complete the lighting and its truss. “We were lucky enough to find that they had a small truss system for the small LED lights,” comments LaFore. “We just had to custom-fabricate the truss brackets out of aluminum to hold the truss system at a level that would what needed to be lighted and stay within mall criteria.”

Ace of Signs also installed a set of light trusses for the interior of the studio. In addition to the PAR38 LED lights, LaFore also added GoBo projectors here that project station and sponsor logos onto the real wall of the broadcast area. “This allows the station to change out the messaging immediately and identify the activity in the space,” he says.

The six-and-a-half-inch-tall “Max Media of Pennsylvania” letters pin-mounted to the top of the sign panel were provided by Gemini. Ace of Signs added a brushed aluminum laminate finish to them. The panel itself is made from raw aluminum and was spray-painted with an automotive black urethane by Kyle Bachman of nearby Bachman’s Auto Body Spray. (Note: To add to the stage feeling, the storefront was covered in polished aluminum diamond plate sheeting.)

Max Media originally wanted to feature the name of the current sponsor “Sunbury Motors Studios” on this panel instead. “However I pointed out to them that, if a new studio sponsor came along later, they would have to change this name out again,” states LaFore.

The installation was performed this past July, four months after the project was brought to Ace of Signs’ attention and a few weeks before the first live broadcast aired. LaFore and his crew worked on stepladders behind a full storefront barricade normally found in malls during store renovations. “We first installed the main frame of the sign and then added the ‘Max Media of Pennsylvania’ letters, then the TVs, and finally the truss-and-lighting,” says LaFore.

The main installation challenge was figuring out how to mount the TVs inside the sign cabinet. “We were mounting the TVs six different ways before we came to the conclusion that we were just over-thinking the entire process,” laughs LaFore. “We ended up just bending up some cradle straps that were sitting down in the sign and positioning the nutserts on the back of the TVs into them.”

Ace of Signs removed the barricade the night before the radio station went live and had to make some final adjustments on the lights and their projection. “The barricade didn’t allow us to get back far enough to make sure the lights were angled properly,” explains LaFore.

LaFore found this project offered a little more flexibility than an electronic message center. “We ran the TVs on a dedicated circuit with an isolated ground,” says LaFore, “and the lighting is on another circuit.

With the sign up and running, LaFore hopes to work on more projects of this type in the future. “This was a very fun, outside-the-norm job to conceptualize and complete,” he says. “The most gratifying part was seeing the reaction on the customer’s face when everything worked.”

All photos courtesy of Ace of Signs, LLC.