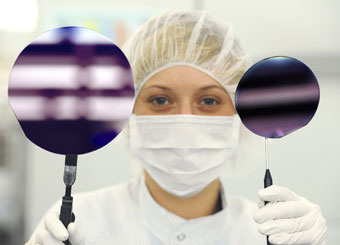 OSRAM Opto Semiconductors will be significantly stepping up its production output by converting its two chip manufacturing facilities to 6-inch wafers while expanding production at both plants.

A new production building is currently under construction in Penang, Malaysia, while in Regensburg, Germany, the existing space is being reallocated. The two facilities will each be converting to the new manufacturing technology, introducing 6-inch wafers to replace the current 4-inch wafers. These measures are expected to almost double the chip production capacity for white LEDs by the end of 2012.

The capacity expansion will primarily affect InGaN chips employing thin-film and UX:3 technology, which are required in the production of white LEDs. In the new production facilities, these chips will be manufactured on 6-inch wafers from the start and no longer on wafers with a 4-inch diameter.

With this move, OSRAM Opto Semiconductors is putting itself on track to capitalize on the growth potential of international LED markets. The Penang chip manufacturing plant, which opened nearly two years ago, has been slated for further expansion with the new production building and conversion to 6-inch wafers. The total manufacturing area will be raised to around 25,000 sqm (269,000 sq. ft.) in 2012, creating some 400 additional jobs in the process. At the Regensburg plant, the available area is to be reallocated and InGaN (indium gallium nitride) production to be converted step-by-step from as early as the summer of 2011.

“By expanding our capacities for high-performance InGaN chips, we are consistently consolidating our market position. The LED market harbors great growth potential in many different fields of application and we intend to continue harnessing this,” said Aldo Kamper, CEO of OSRAM Opto Semiconductors. “The company is an important link in OSRAM’s LED technology value-added chain.”