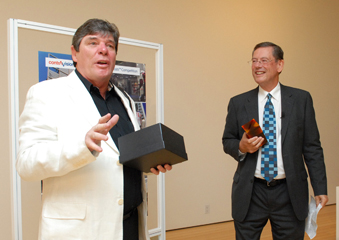 All six winners won a glass sculpture, and $1000 along with travel expenses were awarded to the overall winner, which was Omnigraphics.  The Auckland, New Zealand-based company won for its building wrap of an office block in the Auckland city Centre. The mega-billboard promoted the Rugby World Cup with the slogan, “The World’s here to play.” The overall campaign, which also featured a large scale wrap showing New Zealand rugby players on the KMPG building and matching images on train windows, was a spectacular example of how see-through graphics can extend a campaign across a whole range of eye-catching media.

“Winning this award is huge for New Zealand,” said Steve Spear of Omnigraphics. “We rarely get to compete on a world stage but we do like to punch above our weight; for us this is something we can really show off in New Zealand. Working with Contra Vision really helped us bring the project to fruition and supported us through the whole planning process. The application procedure was so much easier than with other materials we tested, and this is critical when you are working 50 meters up in the air.”

The other winners included:

The project for Wacoal, a leading sportswear brand in Japan, won the Best Interior Design Application. It is a “total-window” retail graphic using Contra Vision® ORS™ on non-perforated, self- adhesive polyester. The project won because Dainippon SCREEN’s solution is a world-first in window graphics—it is see-through and displays different images outside and inside the shop.  The inside design is dominant during the hours of darkness, which makes for great advertising. However it can easily be seen through during daylight hours, when the outside image is clearly visible.

The Kellogg’s “Crunchy Nut” double-decker, bus-side advertisement uses Contra Vision® Performance™ perforated window film with Grayliner™. It combines creativity with humor, reflecting the campaign theme of the lengths people will go to for Crunchy Nut cornflakes in a format that produces a high visual impact. The wrap was printed and produced by VGL Graphics in Reading, England.

The best Point-of-Purchase award uses Contra Vision® licensed product D-view, supplied by Doro-tape and printed by Sheridan and Co. The company used perforated material in conjunction with clear glass. This allows the best view of the displayed jewelry while the stylish graphics featuring Mappin and Webb’s “A Very British Affair” campaign theme draw the eye to the windows. The campaign successfully differentiated Mappin and Webb’s store on a busy shopping street while also providing security through one-way vision graphics, which allowed in-store security staff to monitor passers-by.

Most innovative use of Contra Vision® material or licensed product.

The winner for the most innovative product goes to White Lazq, Belgium for its eye- catching wrap of a ferry in Rotterdam with one-way graphics. The wrap was designed by Benno Brand of Media Advies BV of The Netherlands, and the Contra Vision XR non-perforated graphic was printed by White Lazq.

The Lifetime Achievement award goes to Charlie Vendeville, principal of Imaging Sciences. Vendeville has been printing Contra Vision® products since the late 1980s, and he has long been a dedicated “Contra Visionary.”