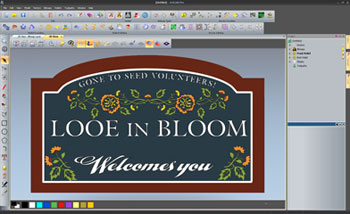 Delcam will demonstrate new versions of its ArtCAM family of software for computer-aided design and manufacturing at the ISA Sign Expo in Booth 2622, April 28-30, 2011, at the Mandalay Bay Convention Center in Las Vegas, Nevada.

The range of software is comprised of ArtCAM Express, the entry-level version for users new to CNC machining; ArtCAM Insignia for production machining; and ArtCAM Pro for more complex design and manufacturing. All of the ArtCAM CADCAM suite feature a completely new interface that can be customized by the user to give them the optimum productivity.

Of particular value to signmakers will be a new dual strategy combining roughing with an end-mill and V-bit carving.  This gives the advantage of faster material removal with the end-mill, while retaining the finish quality that is possible with a V-bit cutter.  In addition, machining simulations have been made more flexible by adding the ability to change the view during the simulation.  This makes it easier to check the quality and accuracy of the toolpaths on the computer before they are sent to the machine.

For faster calculation times, a great deal of underlying technology has been incorporated into ArtCAM from Delcam’s industry-leading engineering CAM system, PowerMILL, such as the latest in multi-threading technology and 64-bit. Also added in the latest version is extended corner sharpening on smart engraving and improved raised round tool machining.

Further improvements have been made to the design tools. These tools are highly valued by ArtCAM’s creative users as they can be used to produce virtually any shape. For users wanting to start with clipart, features such as drag relief layer to clipart library and simultaneous use of the clipart library have been added.

Free demonstration versions of Delcam’s ArtCAM Express and ArtCAM Insignia artistic CADCAM software will be available at the show.  The CD includes a range of supporting materials, including an image gallery, case-studies, and an overview of how to use ArtCAM.  There are also six demonstration videos and accompanying tutorials to help prospects learn the software.  These cover 2D and 3D modeling and machining of some simpler designs, nesting of shapes, and V-bit carving.

Both ArtCAM Express and ArtCAM Insignia are aimed at skilled artisans rather than engineers and require little knowledge of engineering or computing.  Indeed, ArtCAM Express is believed to be the easiest to learn and fastest to use engraving and routing software currently available.  It offers basic 2D drawing, and 2D and 3D machining functions, and so provides an ideal introduction to computer-based manufacturing for companies in the signmaking industries.