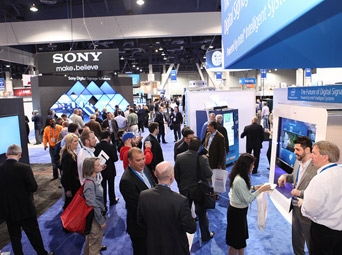 Digital Signage Expo®(DSE), the world’s largest and longest running International Conference and Tradeshow dedicated exclusively to digital signage, interactive technology and digital out-of-home networks (DOOH), has been declared a success by exhibitors, many of whom wrote business at the show.

The conference and trade show, which ran February 11-13, drew just over 4,000 attendees, of which over 42% were end users, the primary prospects that DSE’s exhibitors want and need to see. 1,813 exhibitor personnel attended, bringing DSE’s total attendance to over 5,800.

Of that combined total, 29.85%, or 1,195 traveled to DSE from outside the US, attracting total attendance from 67 different countries including: Canada, Mexico, Brazil, South Korea, Japan, Columbia, China, the United Kingdom, Australia and Taiwan.

Among the over 200 exhibiting companies, 56 were exhibiting for the first time and 44 were from international markets, expanding the show floor to just over 70,000 net square feet, an increase of 13% over 2013.

Exhibitors reported that attendees were high-quality decision-makers from a broad variety of end-user business categories, a profile that has become the hallmark of this leading international event since its inception in 2004. “DSE is such an important event for Samsung, both as an opportunity to listen to and network with industry leaders on the latest trends, as well as to share our latest display technology,” says Michael O’Halloran, product manager for Commercial Displays, Samsung’s Enterprise Business Division. “We’re really coming away from DSE with some strong momentum to head into the rest of 2014.”

Chris Gibbs, President & COO of ExpoNation LLC, which produces Digital Signage Expo said, “In spite of extreme weather that suppressed attendance, many of our educational conferences sold out and the trade show floor were busy both days.” He added, “Weather is the reason that DSE 2015 will be held March 10-12 next year, which will also allow us to expand our educational offerings for 2015.”

Mark your calendar now: Digital Signage Expo® 2015, co-located with the Digital Content Show, is scheduled for March 10-12, 2015, with access to the Exhibit Hall March 11 & 12 at the Las Vegas Convention Center in Las Vegas. To reserve exhibit space contact Jeanne Phillips, (770) 817-5903. Or, for more information, visit www.digitalsignageexpo.net. You can follow DSE on Twitter at DSExpo, or for all DSE 2015 updates, use #dse2015. For year-round news and information on digital signage, visit DSE’s new Digital Signage Connection web portal at www.digitalsignageconnection.com.