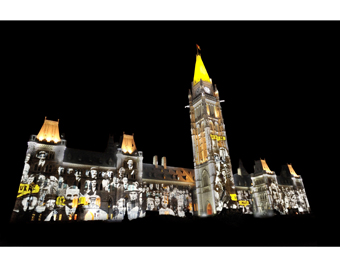 For the fourth consecutive summer Christie® 3-chip DLP® projectors will be lighting up Ottawa’s famed Parliament Hill with a rich and engaging display that attracts more than 250,000 visitors annually. The gripping narrative of Canadian history via the National Capital Commission’s sound and light show, “Mosaika—Canada Through the Eyes of Its People”  begins July 10 and ends September 7 this year.

Accompanied by lights, a 5.1 surround system, and audio track produced by Groupe Phaneauf, the four Christie Roadster S+20K and five Christie Roadster HD18K projectors paint a video canvas onto the 472 feet long-by-246 feet tall, six-story-high Parliament Building Centre Block including the iconic Peace Tower in the middle. One portion features a dramatic 3D segment where the entire structure appears to move in and out in 3D space.

A Journey in Three Acts

Act One explores Canadian landscapes and our founding peoples. The journey begins at Canada’s beautiful west coast, then soars eastward, over the Rocky Mountains, through the foothills and prairies, across the Great Lakes, down the St. Lawrence River, into the Atlantic Ocean, and then northeast to modern-day Newfoundland and Labrador.

From here, the audience is taken north, passing ice floes and polar bears, into Canada’s Arctic region, where the aurora borealis dances in the velvety night sky. Along the way, the audience discovers the gorgeous mosaic of natural landscapes, flora, and fauna that make up Canada’s diverse natural world.

Canada’s founding peoples are also introduced in Act One, and the storyline carries the audience beyond Canada’s Confederation in 1867. “Mosaika” presents how multitudes of people, ideas, and voices have combined in a great discussion to create this country.

Act Two presents Canadian achievements. It begins with the railroad—the great iron link that tied the country together and encouraged westward expansion and settlement. Other achievements are explored, in war and in peace, social achievements that helped to create Canada’s rights and freedoms, as well as Canadian achievements in the arts and culture. Great Canadians are encountered, including Agnes Macphail, Tommy Douglas, Terry Fox, and many others.

Act Three is a discussion of Canadian values. In the third act of “Mosaika,” Canadians from across the country are seen and heard, discussing what is important to them, what it means to be Canadian, and their hopes for the future. Their encouraging and inspirational words drive “Mosaika” toward its emotional climax.

From History to Projection Mapping Reality with Christie Reliability

Jean-Marc Beauvalet, manager, technical services, National Capital Commission (NCC), said the NCC used two Christie projectors for the predecessor of the current show; however, “Mosaika” was one of its first forays into multi-projector use and projection mapping.

“Because of our experience with them, we were fully confident using the Christie projectors for ‘Mosaika,’” said Beauvalet. “Christie has played an important role in helping us achieve our goals with this presentation—to reflect what Canada and its history are all about.

“We had used Christie projectors before and were fully confident of their performance—and, as the projectors play such a crucial role, that made everything else easier to deal with. After show designer Moment Factory did a full pixel mapping of the buildings, our biggest challenge was how to repeat the placement of these projectors to ensure a perfect performance every night. The solution they came up with for the projectors that stayed on the hill was to have the projectors on hydraulic lifts with repeatable heights; they have a sensor that stops them at 120 inches so every performance is exact.”

Not only the production itself but also the public and media reaction impresses the NCC. “The projection mapping creates something magical that people aren’t expecting—they don’t expect to see their Parliament Building transformed into such beautiful colors and delightful imagery. People say, ‘This is incredible. I never thought I would see anything like this in my life.’ It’s an honor to see visitors and Canadians with smiling faces telling us how wonderful the show experience was,” concluded Beauvalet. “With the help of Christie, we have achieved our goal with this presentation—to instill a strong feeling of pride in our country and our capital with a one-of-a-kind free nightly show.

“I can say that Christie and its technology are extremely reliable. They deliver exactly what they say they will.”

“‘Mosaika’ is an extraordinary accomplishment that presents the history of Canada in a way that is entertaining, educational, and visually compelling,” said Kathryn Cress, vice president, global and corporate marketing, Christie. “We are very proud the National Capital Commission selected Christie projectors to be part of this exceptionally innovative and memorable event.”