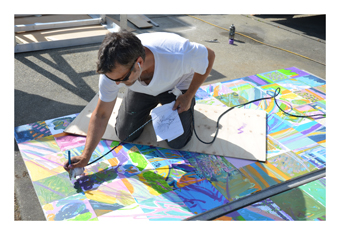 Not unlike its artistic inspiration, community spirits soared at the June 7 unveiling of the new “Eagles in Flight” public artwork in Pitt Meadows, British Columbia, as part of the city’s 2014 Pitt Meadows Day and Centennial celebration. The cubed-shaped mural installed in the city’s Harris Road Park is a collaborative effort of Pitt Meadows’ resident and internationally recognized artist Brad Dinwoodie and community residents.

The Dinwoodie-designed mural features 288 8-by-8-inch tiles cut from four 4-by-8-foot sheets of 3/16-inch-thick Bright White Gatorfoam® graphic display board by 3A Composites USA (www.GraphicDisplay.com) and painted by a wide representation of area residents at the previous year’s annual city celebration. The painted Gatorfoam tiles were pieced together to create one mosaic image onto which Dinwoodie airbrushed an overlay of eagles in flight with mountains in the background to reinforce Pitt Meadows’ designation as “The Natural Place.”

“The enthusiasm and excitement from the kids and parents around the mural was just so exciting,” said Dinwoodie, co-founder of WT Designs (www.wtdesigns.ca) in Pitt Meadows. “It’s terrific to see this work installed for everyone to enjoy for many years to come. Participants should be proud that they had a hand in making this fabulous mural.”

“People think this community mural is awesome and ask if those are the tiles that they painted,” said Susann Sigmund, past chair of the Pitt Meadows Public Art Steering Committee and a local photographer/designer. “Kids who painted the tiles love it. And, their parents appreciate the fact that the city is showcasing their work.”

The idea for the mural came about as a way for the Pitt Meadows Public Art Steering Committee not only to educate local residents about public art but to engage children at the 2013 Pitt Meadows Day celebration, according to Sigmund.

Gatorfoam regularly is used to create interior signage and displays and can be digitally direct-printed. Dinwoodie’s original mural design was printed onto the four 4-by-8 sheets of Bright White Gatorfoam by Port Coquitlam-based Epic Imaging, Inc. (www.epicimaging.ca), which utilized a Fujifilm Acuity UV flatbed printer.

The printed mural was cut into 288 8-by-8-inch tiles that were numbered on the reverse side for placement in the finished artwork. Local children, teens and adults gathered at the 2013 Pitt Meadow s Day were asked to paint the tiles with exterior acrylic house paints in bright colors.

“We let them have a heyda. The kids got the concept but still didn’t understand that they should paint within the lines (of the printed mural design),” said Sigmund, explaining the need for Dinwoodie’s airbrushed overlay image.

Finding a large interior wall within city-owned property to display the completed mural—which measured 8 feet tall-by-16 feet wide—proved to be another challenge. So Sigmund and Dinwoodie devised a plan to display the mural outdoors wrapped around a three-dimensional aluminum frame containing cement-board walls. The sculpture would feature a rain-guard top and be secured to a poured concrete base.

The painted Gatorfoam tiles would be adhered to the cement board with LePage PL Premium construction adhesive. Any exposed edges or spaces between the tiles would be sealed with clear silicone.

The entire mural would be sealed with four coats of a urethane-based UV clear acrylic in order to protect it from the elements, UV sunlight (fading) and graffiti.

While Gatorfoam routinely is utilized for interior displays, 3A Composites USA has introduced Gatorfoam Exterior for outdoor applications. Available in 1-inch, 1.5-inch, and 2-inch thicknesses in the Bright White color, Gatorfoam Exterior is manufactured with a top-grade adhesive that is designed to withstand exterior conditions. Any exposed foam edges of Gatorfoam Exterior must be protected from UV exposure with a high-quality, pigmented water-based coating or other UV barrier.

“We advise customers to utilize Gatorfoam Exterior for outdoor applications because it is specifically designed to withstand exterior weather conditions as long as the edges are protected from UV exposure that can discolor and eventually degrade the polystyrene,” said Scott. “This mural was engineered so well—with the Gatorfoam tiles well-protected from UV exposure and other weather conditions—that I was able to recommend it in a letter to the Pitt Meadows City Council.”

“It was an amazing experience to be able to phone and talk to technical experts at 3A Composites,” said Sigmund. “The city council at first rejected our proposal and we knew that couldn’t be right. We were so happy that a technical team member at 3A Composites would talk to Brad.

“If it wasn’t for Gary Scott, this project wouldn’t have happened.”

“It’s not unusual for us to get involved in these types of projects,” said Scott. “We want to help with these projects upfront.”

While most materials, design services and labor were donated by local businesses for the “Eagles in Flight” mural sculpture, the City of Pitt Meadows Public Art Steering Committee and City Council had to vote to absorb the expense of structural engineering services, the aluminum frame and installation.

“For our little community (population 18,200), this was a really big deal,” said Sigmund.

Dinwoodie added, “This mural turned out even better than the city council imagined. Since children painted the majority of tiles, they’ll be able to come back year after year to see it.”