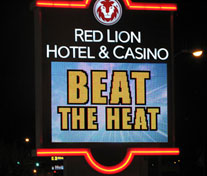 According to Mike Freeborg, sales/marketing director for YESCO Electronics in Logan, Utah, one of the worst things that can happen to a sign shop is to sell an elec­tronic sign and have it disappoint your customer’s expectations.

It’s not that Freeborg isn’t a believer in electronic message centers (EMCs). In fact, he’s been in the sign business for eleven years, during which period his company bought out an EMC business to add to its traditional sign offerings.

Freeborg is “passionate” about what EMCs can do. “The biggest mistake we see is that a lot of EMCs that go up are simply not good fits for the client,” he says.

The converse is also true, of course. An EMC that really works not only attracts customers to the client but will also draw in other business owners who will ask the client where he got that terrific sign.

So once you get the first inclination that a client may be interested in an EMC—either through his approaching you or your putting out a feeler—there are seven steps to follow to ensure that what results will constitute a win-win situation for all involved.

1. Clear the permit hurdles. “It often happens that sign builders will put the cart before the horse. For the key initial question is not what the client may want but instead what the regulations will allow,” says Walter Sanchez, sales manager for Grandwell Industries in Holly Springs, North Carolina. “Permit regulations can vary from one end of town to the other, but it’s a mine field you have to navigate from the start.”

Sanchez says you have to find out the regulation parameters for the particular site in mind, whether it’s off the highway, a smaller road, or maybe even in a pedestrian historical district. You’ll also need to learn if the EMC is even allowed, the square footage, bright­ness levels, whether a flash is allowed or just a static message, and the time allowed between changes.

Many town officials have a fear of EMCs because they think they will turn their community into a garish environment like Las Vegas or Times Square. And they often don’t under­stand the language. “So make sure you have the permit permission in writing before you sign a contract,” says Sanchez.

2. Understand the limitations of EMCs. Many people tend to think that just because something is new and high-tech—especially if it’s expensive—then it must be great.

Electronic message centers may be (and often are) a great form of signage as advertising, but this isn’t necessarily always the case. The lack of proper understanding of this technology can actually result in more harm than good.

“A big assumption is that bright at night is good, but this is a complete falsehood,” says Freeborg. “A sign that’s too bright is hard to read and is a distraction and a disservice. I’ve seen signs so bright they’ve hurt my eyes. And if a sign is too bright, it displays a halo, which prevents the message from being seen.

“Almost every sign in the United States has the ability to be dimmed at night and should be dimmed at least 5 to 10 percent. This bright­ness issue dwarfs every other consideration in terms of regulations and community aesthetics.”

Another big misconception, continues Freeborg, is that customers need dancing animation and fancy transitions. “This is absolutely not true and can be a disservice to the customer. For the glitz can interfere with the message during the few seconds the motorist has time to read it in driving past,” he says.

David Scaglione, vice president of sales/marketing for Hyperion Electronic Message Centers by Electro-Matic Products in Farmington Hills, Michigan, adds that human conditions play a special role in appropriate display content. “The eye won’t read a blue letter easily, so putting in a blue message makes it difficult for the reader,” he says. “I recommend that a basic message be put in red letters with white pixels around it.

“Often sign makers will make the letters too small or try to cram too much into a single screen. It’s better to simplify with larger letters. In fact, it’s better to use all capital letters instead of small ones.”

3. Survey the site. You can eliminate a lot of potential mistakes through a quick visit to the site, according to Nick Bogen, direc­tor of sales/marketing for Adaptive Micro Systems in Milwaukee, Wisconsin. “Make sure your proposed sign is traffic-appropriate,” he says, noting that the distance the sign is from the road and the speed of the traffic (especially on a highway) dictate the size and simplicity of the text. In other words, less is more.
On the other hand, you can also have “overkill” by pushing for a sign larger than needed. “This might be true on a well-traveled city road in which the establishment is right near the road,” says Bogen.

Electronic signs are much less in demand with churches and schools, but there’s still a place for them. “In [these environments], you’re talking to a select number of people about coming events, whereas a retail store is talking to everyone,” says Bogen. “The lower pace of pedestrians in historical areas also allows for more talkative signs and more elaborate visual displays.”

4. Determine the message the customer wants to convey. Regulations, the site itself, and budget concerns put constraints on a sign, according to Bogen. “But to turn these constraints into posi­tives,” he says, “it’s important that the message have clarity.”

Include just what is needed, not more and not less, in the message. “For a simple sale, you don’t need full-scale graphics, for instance. Just ‘Oil Change Special’ over an open bay in plain, red letters can do it,” says Bogen. “On the other hand, a department store might want a simple, large, non-blinking graphic featuring clothing with the blinking text being only ‘Happy Holidays.’”

Freeborg points out, however, that even a simple graphic might need to be one of higher resolution and higher costs. “I’ve seen ads that intend to show people looking happy (such as at a resort), yet they looked like yellow blobs,” he says. “For an Italian restaurant, a simple image might be enough, but if you want to convey the spices on the meatballs and make them look appetizing, you need a higher quality.”

5. Choose the right vendor. Manufacturers can usually provide stock images and letters. But, says Scaglione, if you don’t have a designer on staff, find a vendor who does. “And don’t be afraid to ask him what will work best to convey the customer’s message within all the parameters allowed,” he says.

Freeborg adds that you should also ask how long the manufacturer has been in business, the types of signs he’s had installed, if there’s an established training program, if he chose software that’s easy to use, what kind of service history he has, and if he’ll ship the finished product in one unit rather than modules to ensure ease of installation.

Also check both the warranty and its enforceability. “We’ve heard repeated stories of people who have bought signs from China, which work for just two months, and then that’s the end of the sign,” says Freeborg.

“At this point, when you offer a complete proposal, put in not only the price but also the return-on-investment. Make that a core part of your proposal,” says Scaglione. “Discuss the cost of advertising in terms of the Yellow Pages®, mailers, or newspapers. Electronic message centers stack up favorably when you put them in that perspective.”

7. Make it easy for the customer. Scaglione says that many people are intimidated by EMCs. One reason is that they think they’ll have to hire a computer programmer to operate the display. “We bring in a demo on a trailer to show what it looks like and to show how easy it is to program,” he says.

(Note: Scaglione adds to make sure the finished sign is ready to be installed upon arrival, so the customer won’t have to go through the disappointment and anxiety of waiting to see how it will look in action.)

Electronic message centers aren’t only easy to use, but they also drive in business. “When the economy tanked, these electronic signs still worked,” says Freeborg. “I read McDonald’s® did a study that showed EMCs increased their sales by 3 percent, but the lowest we’ve seen is 16 percent.”

Freeborg states his company has even seen results that tripled figures over 100 percent. “The manager of a multi-tenant retail center asked a restaurant owner to take advantage of his EMC,” he says. “So he advertised on it a burrito special for a reduced price and saw a 300 percent increase in sales. A diesel engine trucking outlet offered its diesel exhaust for its standard $800 on an EMC and saw its sales quadruple.”