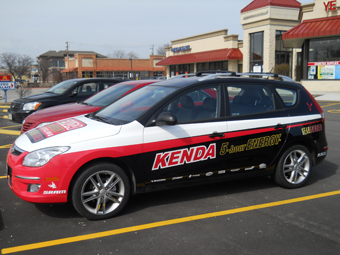 FASTSIGNS International, Inc., has partnered with Kenda/5-hour Energy Pro Cycling presented by GEARGRINDER and Inferno Racing as a sponsor for their 2011 season.

In an effort to help the team build awareness while on the road, FASTSIGNS produced custom vehicle wrap for the cycling team’s van, trailer, and three team cars. Covering the entirety of the van and the trailer, the design features an image of a cyclist along with the names of the team’s sponsors. The team cars, which are used to follow the cyclists and provide support during long races, showcase a red and white design with the team and sponsors’ logos.

“We are thrilled to be able to sponsor such a talented cycling team—it’s great exposure for us to be a part of this,” said Drue Townsend, Senior Vice President of Marketing. “It should be an exciting race season and we look forward to meeting spectators at the local races.”

FASTSIGNS owners from different parts of the country will be present at many of the races taking place around the U.S. and Canada to help support the team. Visitors will be able to find a local FASTSIGNS center team near the Kenda/5-hour Energy Pro Cycling presented by GEARGRINDER vehicles at many of these races.

“We are lucky to have found a sponsor in FASTSIGNS. FASTSIGNS has always been revered as an industry leader in vehicle graphics and that is evident on all five of our vehicles that they have designed and wrapped for us,” said Chad Thompson, owner, founder, and general manager of Inferno Racing and Kenda/5-hour Energy Pro Cycling presented by GEARGRINDER. ”They are bright, bold, and exciting.

“FASTSIGNS guarantees all of their work and also turned our vehicles around in record time. Stop by any event we are attending and take a look at our cars, van, or trailer, and you can see for yourself.”

More information and a schedule of upcoming races that the Kenda/5-hour Energy Pro Cycling presented by GEARGRINDER team will be attending can be found at www.infernoracing.org.