Home News Game On! For Vinyl and Non-Vinyl Branding 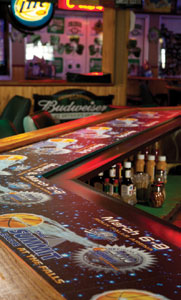 The Sioux Falls Sports  Authority in Sioux Falls, South Dakota actively recruits major sporting events to come to its area. And back in 2009, it won the bid to host the annual NCAA Summit League men’s and women’s college basketball tournaments at the Sioux Falls Arena. “It’s a two-year contract,” says Mike Sullivan, executive director of the Sports Authority. “Our second two-year contract started this year.”

The Summit League (formerly known as the Mid-Continent Conference) is comprised of ten universities located primarily in the Midwest, although there are also some schools in Utah and Louisiana. Branding is very important to them, since they’re frequently trying to get the word out to the public about their member schools and activities.

“Our new conference name derives from always aspiring to go the top (whether in academics or athletics),” says Vanessa Quimpo, marketing director with the Summit League.

The Sioux Falls Sports Authority and Summit League knew they were going to need effective branding to make a local and national impression. After all, these tournaments would mark the first time that a national television network (ESPN) was going to broadcast an event in Sioux Falls (as well as South Dakota).

Enter The Mitographers, graphics providers also based in Sioux Falls. What started out, back in 2009, as an initial order of twenty-eight-foot banners has expanded into an increased order of graphics for each March’s succeeding Summit League tournaments.

The team at The Mitographers—Sales Manager Tim Phillips, Sales Representative Terry Culhane, and Insider Sales Team Leader Tracie Tirrel—has been instrumental over this period in designing, outputting, and installing identity and promotion.

The Sioux Falls Arena was an older complex, so right from the project’s “tip off,” everyone thought both vinyl and non-vinyl branding would help enhance its appearance. “We decided to incorporate the graphics that decorated the lobby into a basketball theme—using the logos of the schools and the Sioux Falls Sports Authority, pictures of players, etc.,” explains Sullivan.

“So each team had a logo inside a basketball applied to the floor printed out on FLEXmark® floor art™ material,” says Michael Chevalier, new business development manager for At-Retail Advertising at FLEXcon. “The Mitographers output pillar graphics onto WALLdeco™ 6770 material that tied into the floor graphics. And there was a larger ‘welcome’ mural attached to the wall that was printed out onto WALLdeco 6770 fabric, as well.”

The Mitographers team was careful here to avoid sharp edges that could create edge-lifting situations. They also used an anti-slip overlaminate to protect the printed floor graphics.

With the games being televised on the ESPNU network, the Summit League also had to consider branding for television. The solution: A center court graphic.

“When our games are televised, the first thing people see is the big Summit League logo in the middle of the court,” says Quimpo. “But when it comes to athletics, you don’t want the playing surface to be the story.”

Since this wasn’t the home court of the Summit League (the Sioux Falls Arena also hosts semi-pro basketball and hockey teams), The Mitographers printed out the new Summit League vinyl graphic onto low-profile, non-slip-surface FLEXmark floor art material base in such a size to cover up an already-existing logo.

The installers cleaned the floor area first using Windex®. “You want a clean surface for materials to adhere to,” says Chevalier. “Then it’s a matter of starting on one edge of the graphic and laying it out with a squeegee to press out all the bubbles.” (Note: The Mitographers finished by applying several coats of clear coating to the floor graphic.)

The Summit League was thrilled with how the graphics turned out. “We had fourteen games played over four days, so there was a lot of people running over that logo,” says Quimpo. “There was a lot of scuffing on the floor, but we didn’t have any issues with it. It held up well and showed up great on television.”

The external branding plan encouraged area businesses to get involved in spreading the word. The Sioux Falls Sports Authority devised a plan where any area businesses that made a fifty-dollar donation to the event would receive a 12-by-12-inch vinyl decal to place on their windows or doors to announce that they were either a sponsor or supporter of the tournaments. They even hired interns to go door-to-door soliciting these donations.

While out driving one day, Sullivan also noticed that people were hanging banners from a highly prominent downtown street-crossing glass skywalk spanning across a four-lane road, so he wanted to do the same. The Mitographers printed out Summit League graphics for this skywalk onto seventeen clear, perforated See-THRU SIGN® panels measuring 51-by-91 inches.

Because the graphics were being installed in the South Dakota dead of winter (thirty days before the event), dropping temperatures forced the team to have to apply the graphics inside the skywalk (facing traffic). “The controlled temperature made for an easy install,” says Chevalier. “These graphics and branding really created a buzz in the community.”

When it comes to collegiate athletics, there are plenty of opportunities for graphics providers to jump into the lane and provide slam-dunk results with branding.

Chevalier brings up smaller conference events, for example. “Although the Summit League is part of the NCAA, they’re not like a Big Ten™ Conference,” he says. “They don’t have the huge marketing budget, so they’re on the lookout for affordable solutions.

“But larger conferences can take a page from the Summit League playbook on doing more branding in communities and arenas.”

With digital printing advances today, graphics can be output in less than twenty-four hours before an install. “When a sign shop considers traditional floor or spot graphic(s), they need to think about large surface area coverage within the sports and arena marketplace,” suggests Chevalier. “This means instead of spot two-by-two-foot graphics, they could cover the whole 900 square feet with material and create one large, beautiful image or mural.”

The Sioux Falls Sports Authority already has a plan to generate more sales—and more graphics—next year. And this extra effort demonstrates that the community cares about the Summit League (which should help for future bids).

Photos courtesy of The Mitographers.

Eye of the Wrapper