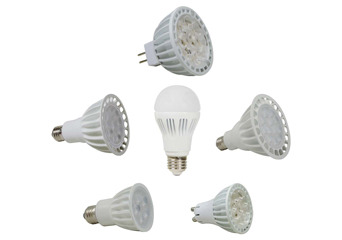 MaxLite’s new LED lamps provide better quality than incandescent or CFL lamps and many return on their investment within a year. The bulbs feature a long life of up to 50 times longer than incandescent bulbs, totaling up to 50,000 hours or 12 to 13 years based on eight hours of daily usage. MaxLite’s LED lamps offer excellent color rendering and provide significant energy efficiency and high lumen output. Manufactured with high-ranked binning for color uniformity and consistency without any hazardous materials, the new models operate at a cool temperature without emitting radiation or heat, reducing HVAC costs and maintenance. All MaxLED lamps are backed by a five-year limited warranty.

•   A 3.5-watt E12 candelabra-based LED replacement lamp is available in Flame Tip and Torpedo configurations. The color temperature for both models is 2700K (warm white) and is available with clear and frosted lamp envelopes. The clear models produce 140 lumens, and the frosted models produce 130 lumens. Both models are cUL- and UL-listed for damp locations and have a CRI of 80.

Bringing the Big Sky Inside