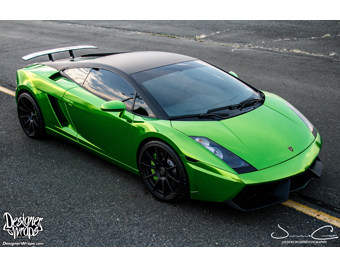 These were just some of the questions a graphics provider recently answered when the owner (Marc Cavallo) of this Verde Ithaca (lime green) Lamborghini stopped by with this request. To arrive at the appropriate solution, the shop looked at the trends that were popular overseas and decided it was time to start bringing them to our shores.

Designer Wraps in Millville, New Jersey is a full-service, seven-person custom wraps and graphics shop. In addition to wall murals and building wraps, the company specializes in graphics, stylings, and color changes for racing, commercial, and personal vehicles in the Greater Philadelphia area. Fortunately Designer Wraps has worked on its fair share of exotic-type cars and wasn’t daunted when Cavallo brought this vehicle to their attention. (Note: The shop has also worked on vinyl color changes for a Nissan GT-R, an Audi R8 Spyder, and a Fisker Karma hybrid.)

In fact, the business had already worked on some successful smaller jobs for some of this customer’s other luxury cars, so he had faith they could deliver here as well. However the answer took a little time to ponder. “We collaborated with this customer for several weeks on determining what to actually do with the car,” says Sean Tomlin, owner of Designer Wraps. “He knew he wanted something very unique.” (We know what you’re thinking: “Unique? This is a Lamborghini!” But practice some patience, and you will see how the company made all this magic happen.)

Tomlin had noticed an increase in full-color wraps for high-end cars and brought up this possibility. And since this was a European car, Tomlin thought beyond just a full-color wrap and instead imagined a chrome wrap—a movement that was already very popular in Europe (and starting to pick up some traction here in the States).

“[Cavallo] and I wanted to take it to the next level,” says Tomlin. “Though chrome vinyl is available here now, colored chrome had not yet been done in our country. And we really wanted to be the first to do it here.”

The groundbreaking end-result is something that Tomlin describes as “plain green glory!”

Designer Wraps accomplished a full-color change-out using Avery Conform Chrome Wrapping Film with a custom coloring (“Our secret sauce,” says Tomlin). They wrapped the sides, the hoods, and the bumpers with green chrome.

They then added Matte Black Avery Supreme Wrapping Film to the roof, the side pillars, the door jams, the deck lid (the partial rear bumper), and the green-tinted deck lid glass (the glass that exposes the motor).

The Designer Wraps three-man team had to completely dismantle the car in-house and wrap each piece separately. “All the corners were rounded and/or wrapped completely around,” says Tomlin.

So when dismantling a car as expensive and as status-symbolizing as a Lamborghini, it is not hard imagining nerves would factor in to make sure everything could be put back on the right way. “There is always a little bit of pressure,” confirms Tomlin, “but most customers with high-end cars just want it done right. They are not looking for a rush job.” Because of this mindset, Tomlin and his crew were able to work on the car for two weeks with no worries or pressures.

It took a full day to dismantle the car. “We then bagged and labeled everything, so that everything would go back on the way we took it off,” says Tomlin.

To apply the specialty vinyl films, Designer Wraps soaked their WetEdge squeegee with a solution called Croftgate Aquanil-x. They also used heat guns and lots of knifeless tape in the install process. “This limited the amount of blade on the car,” says Tomlin.

Designer Wraps ended up being able to really take their time during this project. “We allowed ourselves a full day to put it back together,” he says. (Note: Although the shop had possession of the car for two weeks, they did not work on it non-stop during this timeframe. They still had to fulfill other customers’ wrapping requests. “We put in about 150 man hours on this car,” says Tomlin.)

As an added bonus, Designer Wraps also placed subtle “embossed” logos of their company under the black portions of the wrap. This would make their name (and their work here) stand out a little bit more. “We simply just cut out our logo in vinyl and applied it to the vehicle surface first and then wrapped over top of it,” says Tomlin. “When you heat it and sink the wrapped vinyl into the logo, this makes it look like it’s embossed underneath it. It is very cool looking.”

Tomlin stresses that the finished job turned out amazing—even better than he could have imagined. “Once we put the last piece on the car and started backing it out of our garage, our jaws dropped to the ground,” he says.

Tomlin has been involved in vehicle graphics for nearly six years now and has kept up with all the latest trends during this time. He remarks that there has definitely been a shift toward solid, full-color wraps when it comes to vehicles these days. “It seems we are now getting more into the color changes [via vinyl] where people want to change the color of their car without the need for paint,” he says. “They do not want to have the color be permanent.

“This also protects the paint underneath it. And if they are turning it in after a lease, they just pull it off, and there is no harm done.”

According to Tomlin, another reason for the popularity of full-color vinyl wraps is that, if done right, the price is typically 25 to 30 percent less for the customer than a paint job.

Right now, Tomlin views the most customers for these wrap jobs as owners of high-end cars or people with more disposable income. “It is not there yet for the average person, but I do think the trend is moving in that direction,” he says. “So if somebody happens to buy a Honda Accord and the only color they can get it in is black but they really wanted white, well for another $3,500 to $4,000, they can get it wrapped in white film.

“Then at the end of their lease, they pull the wrap off and turn the car in, and it has got the perfect paint job underneath.”

In the meantime, Designer Wraps has really hit the fast lane with their exotic car wraps. Their accomplishment as one of the first shops in the country to do colored chrome should only speed up the trend to be adopted here as well.

Update on Agfa’s Acquisition of Pitman