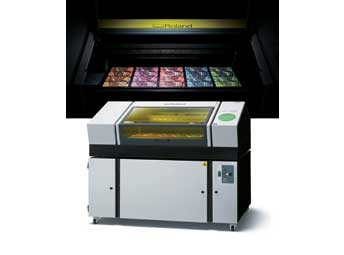 According to Daniel Valade, Roland DGA’s product manager for the VersaUV LEF Series, the new LEF-300 is the perfect addition to Roland’s existing LEF-12 and LEF-20 models. “Roland VersaUV printers are renowned for their ability to print rich, vibrant, detailed graphics directly on virtually any substrate, including three dimensional objects up to 3.94 inches thick,” said Valade. “The LEF-300 was developed in response to customer demand within the personalization and custom printing markets for an LEF printer with significantly increased production capabilities.”

To accommodate greater quantities and larger-sized items, the LEF-300’s printing area has been expanded to 30 inches (wide) by 13 inches (long) – 50 percent more than the LEF-20. With four print heads and two UV-LED lamps, the LEF-300 enables bidirectional printing approximately 60 percent* faster than the LEF-20. The number of White and Clear (gloss) ink nozzles have been doubled for faster printing, increased density and opacity, and faster build-up of multiple layers for three-dimensional textures. A new draft print mode improves overall efficiency for users in need of quick prototype prints.

Users can print on a vast array of substrates like PET, ABS and polycarbonate, soft materials such as TPU and leather, and a host of three-dimensional items ranging from smart phone cases and laptop covers to signs, giftware and promotional items. The LEF-300’s built-in vacuum table helps hold thin and soft materials in place, allowing for easier job setup and eliminating time-consuming errors. Users will also appreciate the included BOFA air filtration system, which ensures proper ventilation while also serving as a stand and storage unit for fixtures and supplies.

The LEF-300 comes equipped with Roland’s new VersaWorks® Dual software RIP, which in addition to incorporating all the advanced, easy-to-use features of VersaWorks, supports native PostScript and PDF files for improved file processing including files with transparencies. VersaWorks Dual features such as offset, positioning, rotation, registration of ink layers, and automatic creation of White and Clear ink effects can also be handled directly in the RIP, without the need to return to design software.

Valade is quick to point out how the growth of digital technology has facilitated the printing of photographs, illustrations and logos onto items that people wear or carry. “These advancements have made it easy for individuals to use these kind of items to express themselves, and to simply stay close to the things they value,” he said. “The market for on-demand printing onto various articles is high, and we expect to see this growth continue in the years to come. More and more businesses are providing custom printing services for smartphone cases and accessories. Kiosks offering on-site printing of photos taken by customers onto blank goods are also popping up at shopping malls around the world. These are all ideal markets for the LEF-300.”

Valade also sees potential in the application of the LEF-300 for use in mass production. “The LEF-300 incorporates an input/output system that supports external devices like warning lights and custom production automation systems, making it perfect for high-volume environments,” he added. “It’s also built with precision parts that are not susceptible to temperature or humidity fluctuations, so users can expect high-quality, reliable performance at all times, even during the longest production runs.”

* In a CMYK ink configuration