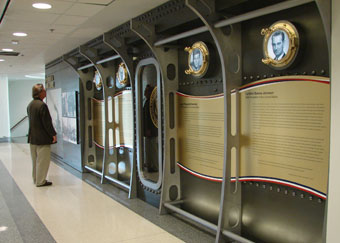 Smart Design in Woodbridge, Virginia has been creating dimensional signage, seals, and exhibits for over ten years. Ninety percent of their work is for the government, and on a recent project, Smart Design made use of cold spray metal to produce a set of exhibits for the Navy.

The company was tasked with creating displays that would hang in the Pentagon and honor the five-star Navy Suite Admirals and past presidents who had served in the Navy. The exhibits would take up two, 50-foot long walls and one twenty-foot long wall.  After a few weeks spent developing a concept, Owner Shelly McMahan settled on a “ship” look for the display. “We decided it’s Navy, and we had never done a Navy display, and we thought having the ship look up there would be really neat and very different from anything else that’s up there,” she says.

Due to the size and intricacy of the project, Smart Design collaborated with an exhibit company to get the work done on time. The exhibit company fabricated all the display’s trusses and background pieces out of MDF at its shop.

Smart Design then went up to the shop to coat all the pieces in gray cold spray metal. Using a high-volume, low-pressure gun, the trusses were sprayed with aluminum and the background was sprayed with iron. “This is a very nontraditional method of applying metal, but it really is metal,” says McMahan. “It’s a metal powder that we mix with a resin so that we can spray it. But after we spray it, it’s just like we become a foundry at that point because you have to remove the oxidation, just like a foundry would. And then you have to sand it, and polish it, and finish it.”

This process allows Smart Design to make pieces that are more dimensional, and it also keeps the pieces light. “The [cold spray] metal is mostly just to have something that’s lightweight by carving the foam,” she says. “If they were actually solid metal, they’d be so heavy that they’d have to structurally reinforce the walls.”

To complete the exhibit, actual portholes and rivets were bought from an architectural salvage location. Photos of the Navy Suite Admirals and presidents were placed in the portholes, and rivets along the top and bottom of the display completed the look.

The display was installed using a system similar to French cleats. “You actually just lift the panels and hang it on the cleats,” says McMahan. “We might have a couple of points underneath the rivets where we would actually screw in to certain points and then we can put the rivet over to hide those points.”

McMahan uses this installation method for nearly all projects. “That way if they ever have to move it, or they want to replace it with anything, it’s very easy to do so.”

Want to read about more Smart Design dimensional projects? Check out the feature “The Routing Regime” in our June issue detailing how the company created routed replicas of Thunderbird planes for a US Air Force exhibit.

Smallest ShopBot Ever is a Powerful, Affordable CNC System