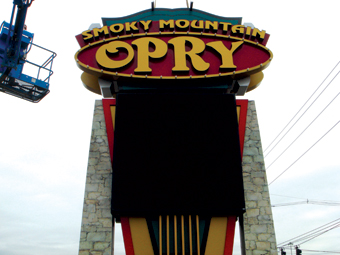 Pigeon Forge is nestled in  the Smoky Mountain region of eastern Tennessee, and with its lineup of theme parks and attractions, theaters, and specialty stores, it’s also a popular tourist destination. So when one soon-to-open entertainment facility in the area needed new on-premise identity signage, it took sign professionals from Florida to come through and bring a bit of Vegas to this request.

The Smoky Mountain Opry was previously a Christian-themed attraction called The Miracle Theater, before the owners decided to rebrand it to instead host country music acts and holiday-themed spectaculars. During the revamp, the owners started thinking about new signage, so they contacted Mike Riggins of retail sign company Riggins Associates in Bradenton, Florida. (Note: Riggins Associates had performed an eight-foot-tall illuminated channel letter installation for these owners’ “Hatfield & McCoy Dinner Show” theater a few blocks down the road from the Opry.)

The owners wanted two signs—a wall-mounted illuminated sign to hang over the building’s front entrance and a pylon-mounted sign to complement its electronic message centers by the road.

Riggins accepted and, because his company had also worked together on the Hatfield & McCoy project, contacted Art-Works Wholesale Signs & Awnings and its sister company Coastal Sign Installation LLC, both housed at the same location in Pinellas Park, Florida. (Note: Art-Works is a wholesale sign company that only does custom-manufactured signs for other sign shops.)

The Smoky Mountain Opry owners beforehand already had a designer tweak their logo to fit wall- and pylon-mounted signs and sent this color drawing to Riggins as a JPEG showing the front view only. Art-Works modified these sign designs to provide the three-dimensional depths necessary to make the signs “pop.” Art-Works then used estimating software to come up with a reasonable price for this custom sign build and installation, and the owners agreed to it.

The 13-by-46-foot wall-mounted sign was built in two sections—(1.) the  “Smoky Mountain” channel letters and flourishes, and (2.) a sign cabinet hosting the “OPRY” channel letters. Art-Works used its ACCU-BEND machine to notch, flange, and bend all the channel letters.

The main sign cabinet is twenty-four inches deep and constructed entirely from aluminum with .125 fillers (sheets, angles, plate, and a two-inch aluminum angle.) The “OPRY” letters are eight inches deep and made from a welded construction.

The “Smoky Mountain” aluminum channel letters stand twenty-three inches tall with a gold vinyl overlay on the faces. “We front- and back-lit the letters with LEDs because they have a clear polycarbonate back that stands off the background,” explains Mike St. Pierre, co-owner of Art-Works and Coastal Sign Installation. (Note: The flourishes are also made from aluminum and gold vinyl overlays and illuminated with LEDs.)

After Art-Works finished painting the sign with two-part polyurethane DuPont® paint, they placed about seventeen pieces (450 feet) of 15mm clear red solid neon tubing extending from top to bottom behind the letters every six inches on-center and into #200 housings to aid the appearance. “We used four-inch stand-offs to suspend the ‘OPRY’ letters in front of the neon,” says Bill Devlin, co-owner of Art-Works and Coastal Sign Installation. (Note: These stand-offs also make any future service work of the neon much easier.)

Early on, the Opry owners specified to Riggins and Art-Works the desire for energy efficiency, so neon had to be used sparingly. Meanwhile LEDs to highlight everything would’ve been too pricey, and the owners would probably have ended up changing out incandescent bulbs every other month.

So Art-Works used 678 Litetronics 130 Lumen Light energy-saving micro bright bulbs. (Note: These bulbs use only 3 watts as compared to the normal 15-watt incandescent bulbs.) Art-Works CNC-routed holes into the sign cabinet panel to match and hold the light bulb sockets.

Art-Works placed the letters and cabinet on saw horses with their backs facing up and installed the wiring. The letters and ring-shaped panel feature false backs sunk down about four inches. These backs hold all the wiring for the bulbs.

“There’s an extensive amount of wires inside each letter. It looks like spaghetti,” says Devlin “We also have an eight-point flasher controller that basically picks certain bulbs to turn on and off. This makes the sign appear to be twinkling.

“We then took the backer panels that were pre-wired with all the sockets in it and stuck it inside the letter and screwed those into the background of the letter. Then we screwed in all the light bulbs.” (Note: Thirteen transformers bought from N. Glantz are inside the perimeter of the cabinet and power this wall sign.)

Art-Works built the wall-mounted sign in two weeks. It was disassembled into two pieces and loaded onto the back of an open forty-eight-foot-long semi-trailer for its trip to Tennessee. Siliconized tube supports on the tandem axel trailer truck helped cushion the neon (and the sign) on its long journey.

Coastal Sign used a smaller, stinger-type Hydro-Crane that would fit underneath the five-foot overhang of the building to lift the sign. Then installers on an eighty-five-foot-reach man-lift positioned the sign and thru-bolted it through the building and into the interior steel beams using twenty-four pieces of 1/2-inch all thread rod.

This install covered two days this past November—and not one bulb or neon tube was broken during the entire process!
As mentioned earlier, the owners also requested a pylon sign using the existing structure created for The Miracle Theater, but they wanted both signs completed and installed in just four weeks. Devlin and St. Pierre quickly realized this wouldn’t be possible. “They still didn’t have the pylon sign design finalized,” remembers Devlin. “In fact, they changed their minds about it while we were building the wall sign.”

So Art-Works put up a temporary face on the pylon structure by the road, until they could finish manufacturing it.
Art-Works manufactured the big steel frame and the double-sided sign cabinet. Coastal Sign returned to the site in mid-December and took the existing cabinets and two LED electronic message centers down (stripping everything down to just the steel poles). “I went up there ahead of time to study how the steel sides were manufactured, so our sign face cabinet would slip over it,” says Devlin.

At the site, Coastal Sign modified the backs of the EMCs so they could be placed back on the newly constructed steel frame. “The sign panel was welded onto the existing steel,” explains Devlin. “We had a ten-inch square tube going horizontally that attached at the top; then on the bottom, we had saddles that the sign slipped over.

“Then we welded the pipes that stuck up out of the top of the sign and slid the top Smoky Mountain sign over it using a man-lift.”

The finished 36-foot-tall-by-22-foot-wide pylon sign design resembles a Gibson guitar, with the “strings” and “fretboard” section hosting the EMCs. The top “Smoky Mountain” and “OPRY” letters are flush-mounted and covered with gold vinyl overlay and only front-lit. The perimeter features fewer Lumen Light bulbs. Those don’t twinkle, since the EMCs are the centerpiece effect here.

The rocky columns covering the steel posts are actually a bit of legerdemain on the part of Art-Works. “We took a picture of the stone base and turned it into a digital print that we output and laminated onto the pole covers,” explains St. Pierre.

Word spreads fast in the theater/entertainment industry, so everyone in the area is now aware of these sign professionals. “This gets Riggins Associates’ name out there and, in turn, gives us possible work for additional signage down the road,” says St. Pierre.