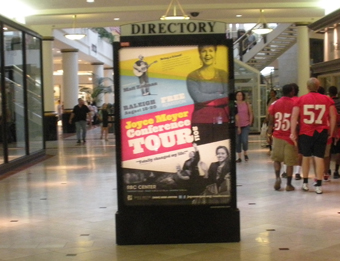 Whether through retrofits or brand-new creations, LEDs are making an impact in a sign form that’s still (at the moment) dominated by linear fluorescents—the sign cabinet or box sign. “There’s definitely been a large ramp-up over the last twelve months in using LEDs here,” explains Jeff Nall, technology manager for Specialty LED at GE Lighting Solutions.

One reason for LED usage can be attributed to reduced maintenance costs—which in turn leads to a more consistent image. For example, during cold weather months, when a typical cabinet sign would start to dim down, LEDs will maintain brightness. (Note: According to GE Lighting Solutions, freezing cold temperatures can drop linear fluorescent performance output down 70 to 80 percent.)

“And not only do outages take away from the brand image, but getting a truck out there to fix a sign can be a significant expense,” adds Mark Shepard, Global Product manager at GE Lighting Solutions. “And every time you open up a box sign, you run the risk of either damaging the face or another component inside it. So it’s not just as easy as going up and replacing a burned out linear fluorescent lamp with a new one. Every time you open up a sign, you never know what you’re going to find or what problems you’re going to run into.

“A lot of customers don’t necessarily want to do what we refer to as a ‘group relamping’ of the sign—where if one’s out, they’ll replace all the lamps. Instead they’ll just replace the ones that are burned out. It’s then that you’ll see that non-uniform look.”

Although LEDs are popular amongst those who use them because of reduced maintenance and energy costs, the technology is also becoming more affordable. “The paybacks we’re seeing are now down in the two- to three-year range,” says Nall. “It’s becoming a much more feasible [component] for companies to adopt.

Spacing of the LEDs is important to reach the effective brightness level for sign cabinet illumination. “For interior box signs, the intensity is going to need to be higher. In fact, typical box signs competing with overhead lighting are going to be two to three times brighter than an outdoor box sign,” says Nall. “So the spacing of the LED product may need to be a little tighter indoors to get a higher intensity compared to outdoors, but that depends on ambient light.”

If you’re performing an LED retrofit into an existing box sign, it’s important to pay attention to the supports and internal structure that are already inside the cabinet. “Whereas fluorescent tubes are emitting light in all directions and bouncing light all over the place inside the sign, LEDs are very directional,” explains Nall. “So anything that creates shadows—even within a fluorescent sign—will create even more shadows with an LED sign.

“So place the LEDs so that you don’t have all the individual LEDs creating the same shadow.”

GE Lighting Solutions actually offers a service where electric sign shops and distributors can send in drawings of box signs to them, and they’ll devise a layout for them showing how the LEDs should be laid out (www.gelightingsolutions.com/applications/signage).

“We try to maximize a couple of areas—both to make sure we have the sign evenly lit, but also that it’s as energy-efficient as possible for the end-user,” says Shepard. (Note: Although the company prefers a .DFX file that can be imported into its software, Shepard remarks that they’ve even received images drawn on the backs of napkins.)

While LEDs boast energy efficiency, long life, and low maintenance, Nall states that, when it comes to lighting issues, it’s important to pay attention to the standards being proposed and adopted these days. “We’re starting to see some requirements for more interface with the sign and the capability to dim,” he says, “and LEDs can do that.”