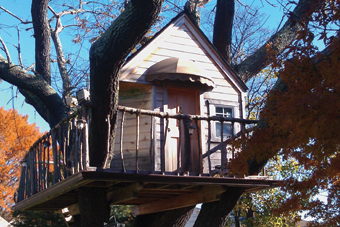 Everyone has their opinion of what constitutes a “custom awning,” but Chris Butler, co-owner of Classic Awnings & Signs Ltd., in Wynadanch, New York, defines this sign-type as something you don’t see every day. And Butler’s shop has stitched quite a name for itself in this field.

Classic Awnings designs, builds, and installs all kinds of awnings in-house. And they’ll spread the love by even doing trade work for other shops unable to handle awning fabs and installs on their own. Butler and his partner Carolyn have successfully run this five-employee business for the past ten years. (Note: In total, the two have been in the sign and awning industry for almost thirty years.)

Through word of mouth, Classic Awnings has accumulated a wide wealth of clients in the Long Island, New York area. However there’s a chance you might’ve already seen some of their work. The shop was the exclusive contractor for the interior and exterior awnings, signs, and graphics featured on the Discovery Channel’s refurbishment TV series Construction Intervention.

Walk into their shop and you’ll notice that they have the usual single- and double-needle sewing machines, as well as binding machines that allow them to put a finished edge on their awnings. An inkjet printer allows them to print up to five feet wide onto indoor or outdoor media.

Other essential equipment includes a fifty-five-foot-reach crane truck, a thirty-six-foot-reach bucket truck, and a couple of pick-up trucks they use for transporting materials out to the job site or performing surveys.

And their clients include both commercial and residential markets. Butler always begins the awning process by asking customers what they’re trying to achieve with an awning (advertising, coverage, aesthetics, etc.), so his shop can guide them to the best decision and product that fit their needs. “We’ll also ask residential customers if they intend to use the awning year-round or just during certain seasons,” he says.

At Home with Residential

Butler finds that homeowners generally have one goal in mind: functionality (coverage from the sun, rain, snow, etc.). This is one reason retractables are a popular option for this clientele. (Note: Classic Awnings is also a distributor of AluTex retractable awnings.) “However this doesn’t mean their awnings have to be boring,” he explains. “There are hundreds of different fabrics and styles to choose from.”

What has really increased custom awning requests from residential clients is homeowners’ desires turn their home into something more than just a home (the “man-cave” effect?).

Butler recently built and installed a two-foot-wide, sixteen-inch-tall dome entrance awning in brown Sunbrella® complete with a scalloped valance for the front of a treehouse in one of his friend’s yards. “This project started out as a goof because he lives in a tight-knit, upscale neighborhood,” says Butler, “but when I found out he wasn’t kidding, I told him I’d figure something out.”

People definitely notice Butler’s solution and even get a big kick out of it. “In return, they come to you wanting to do something similar for them,” he says.

Residential clients are also more open to influence when sprucing up their pads.

One customer wanted Classic Awnings to build and install an awning similar to something his wife had seen in a magazine. The catch: The awning was to be installed on the roof of their brownstone apartment in the middle of New York City. “We fabricated the entire awning in-house, disassembled it, walked up six flights of stairs, and then re-assembled on his roof,” explains Butler.

This project also meant the need for custom components. “We had to fabricate our own connectors and hardware because of the way the gentleman wanted this awning built,” says Butler.

At Work With Commercial

Meanwhile the custom commercial side is more about awnings that stick out and attract attention. And Classic Awnings has taken the reins here, as well.

The owner of a nearby hot tub store asked Butler to fabricate a scaled-to-size awning that looked like a hot tub had been mounted onto his building. Classic Awning ended up building the “hot tub” and the awning out of the same one-by-one-inch steel framework.

Butler couldn’t find a wood grain fabric for this awning, so he took brown vinyl material and blue Cooley-Brite® and washed it out, leaving him with the white fabric. Then Butler took some high-res digital shots of the interior of a hot tub, its ladder, and its jets and then printed it out onto a clear vinyl and laid it down on top of the framework.

Although this “hot tub” awning is illuminated through traditional fluorescent lamps, one trend that’s taken off with commercial clients is using LED for illumination, especially with the flexibility provided to down-light or back-light an awning. However, through experimentation with module spacing and population, Butler doesn’t think LEDs can properly light an entire awning—yet.

For an automotive repair shop, Butler used LED components as the secondary light source on the awning. “We ran the LEDs around the back of the black Sunbrella fabric and underneath it to almost give it a reverse-lit effect like you’d see with a channel letter,” he explains. “We placed blue LED on the back of the awning against the wall to give it a really nice halo effect.”

John Estevez, owner of Goodfellas Barbershop in North Babylon, New York, approached Classic Awnings to replace the plain black awning on his tiny storefront with LED channel letters. Butler went one better: He wanted to add these letters onto a new awning for him.

The customer provided Butler with his logo and artwork for the channel letter sign; in turn, Classic Awnings superimposed the imagery onto an awning and showed it to him.

Estevez wasn’t initially sold on the idea, citing the limited amount of front space. “But he eventually told me if I could do everything within the budget already agreed upon (and not change this figure at any point), then he was game for this unique idea,” says Butler.

Butler reconfigured the original awning and remodeled almost all the steel framework inside it.

Wiring the letters through the awning was fairly straightforward, since all the three-and-a-half- to four-inch-wide channel letters stand up straight.

Classic Awnings welded a steel grid framework behind the black Cooley-Brite awning material and fastened the channel letters to this grid via 3/4-inch all-thread.

They then cut pieces of 1/2-inch PVC to act as spacers for the letters and painted them black so they would blend into the black awning material. “We ran our low-voltage wiring through there to hide it,” says Butler.

The awning featured LED-lit channel letters and a black egg-crate with standard fluorescent fixtures underneath it. “Surprisingly it’s got quite enough light,” says Butler. “The channel letters are a little narrower than standard-sized letters, so they light up pretty nicely.”

Classic Awnings built and installed the entire sign in-shop as one piece. “Fortunately this was more an awning install than a channel letter one,” says Butler. “We didn’t need any patterns. We just placed the channel letters on the awning and went from there.”

The end-result is two-fold: “When you drive past the barbershop at night, it looks like the channel letters are just floating there,” says Butler. “And at day or during bad weather, the awning portion provides protection and coverage.”

Probably the most essential stage of any custom awning project happens at the beginning.

Butler always starts with a field survey to obtain lots of photos and building measurements, so his shop can give the customer a price. “We’ll inflate this price a little to cover us,” he says, “because things can always change and the customer will always want to negotiate.”

There’s another important reason for taking hundreds of photos. “When we get back to the shop, if there’s an angle or a gutter we didn’t notice while out at the site, we can see it in the photo and plan accordingly from there,” says Butler. “This will help us build a better awning.”

Like most things in life, everything has its own pros and cons—and yes, this even includes awning materials and fabrics.

“Eradicable material is fantastic to illuminate an awning outwardly, but it’s very tricky to work with, since it creases very easily and leaves blemishes,” says Butler. “Meanwhile cloth-type fabrics can be a challenge when adhering graphics to it and/or painting it.”

Butler always tries to guide his customers in the right direction based on the application and their needs. (Note: He’ll even employ awning materials not sold for the sign industry, if he believes they’ll work in a particular project.)

“If clients are looking for a colorful awning that’s illuminated, I’d use Cooley-Brite in their projects,” says Butler, “whereas a restaurant would likely go with a Sunbrella fabric for its water resistance and deep color, which looks very elegant with goose neck lighting.

“We recently used a waterproof and fire-resistant cloth-like material called Herculite™ for a customer who wanted the underneath of his awning covering the steelwork and any electrical boxes powering the high-hat lighting and ceiling fans.”

When it comes to advice for end-users about caring and maintaining their awnings, Butler stresses to them to never power wash a Sunbrella awning. “Sunbrella is a canvas-type material that is treated with a fluorocarbon finish,” he explains. “Power washing removes that finish. Losing this finish means it’s no longer there to help prevent stains or repel water.

“We recommend mild laundry soap and a very soft brush. This helps the pores of the material stay open and breathable, just like your clothing.”