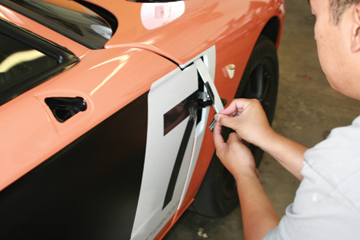 Wrapping exotic and custom cars requires a specialized set of skills, and Iconography Studios in Los Alamitos, California knows this well. You could say it has the exotic car market wrapped up.

Iconography started three years ago out of husband-and-wife team James and Sarah Naccarato’s desire to find a job that combined their skills and allowed them to spend more time at home with their kids. “We looked for a business where most of our customers would be close by and something that would blend my husband’s creativity and my business side,” says Sarah, co-founder, president, and CEO of Iconography.

The sign industry was a natural fit for the pair. Today Iconography is a full-service design studio and custom sign manufacturing company, but it specializes in vehicle wraps. The company has wrapped everything from Jennifer Lopez’s former Rolls Royce Phantom to a Bentley Arnage, and it recently took on its second Ford GT for the founder of an upcoming auto enthusiast online community called Joyride™. The car also appeared at the 2010 SEMA show last November in Las Vegas.

With only a couple hundred on the road, the Ford GT is a unique car. Having worked on one previously, Iconography already knew how to disassemble the car and put it back together again, which is necessary for full custom color change wraps. “The first time you do any car, the disassembly and reassembly is the tough part, especially with a complicated car like that,” remarks James, co-founder, creative director, and general manager of Iconography. “After you do it once, you pretty much know what you’re doing.”

Joyride requested a custom shade of orange for the car and modeled the design after a Le Mans Matech racecar. Iconography printed up a few sample shades of orange, and Joyride chose the color it liked best.

With the color chosen, Iconography set to work printing the vinyl on its SOLJET PRO III Roland XC540 machine with eco-solvent ink. The orange color was printed on 3M™ Controltac™ Wrap Film with Comply™ v3 Adhesive IJ380Cv3-10. It was laminated with 3M™ Scotchcal™ Gloss Overlaminate 8580. It took a few hours to complete all of the printing.

In addition to the custom color, Standard black Ford GT stripes were included in the design. These were created using ORACAL® Series 970RA Wrapping Cast with RapidAir® Technology.

Before installing the wrap, the installers had to disassemble the car. “There’s a whole half-day or day of removal, and a whole day of putting it all back,” says James.

The entire wrap took two installers about five days to complete. The reason for all this effort? Color change wraps are made to emulate paint jobs and appear seamless.

The trend of wrapping rather than painting a car has taken hold in the industry because of the lower costs and the ability to revert back to the original paint job. Meanwhile Iconography has cornered the exotic car market for these types of wraps. “We’ve sort of specialized in super cars and high-end exotics,” says James. “Once you start doing those cars, the community is pretty small that’s around those vehicles, so word gets out.

“We wrapped one Ford GT, we wrapped another one a month later, and now we’re wrapping another one in three weeks.”