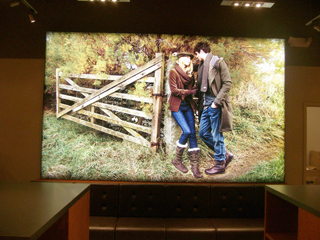 As the sign industry continues to embrace the myriad benefits of LEDs, specialized niche markets are beginning to take shape around this technology. Twenty-eight years later, LED Concepts has changed its name from EXPOTRANS and changed its specialization in light boxes relying on fluorescent illumination for backlit graphics. Today the company has expanded its original mission and catapulted illumination technologies into the twenty-first century.

“We always believed in the market potential of the LED—even though, when we started our research two-and-a-half years ago, it was expensive, the availability of white LEDs was poor, and the assortment of available LEDs was poor—we knew it all would get better,” says Rick Farrell, president of LED Concepts. “We knew the cost would drop and the availability would increase; we knew that all the options (as far as color temperature and color rendering index) would increase.”

Another issue was they weren’t getting the level of luminosity that the industry was used to. “It was very difficult to get enough illumination and to get it even, especially when we got beyond a certain size and fall-off became unacceptable—it just wasn’t efficient,” says Farrell. “We started to look at the watts we were pumping in and what you’re losing through the Plexiglas. We just weren’t happy with the energy savings, and we weren’t happy with the heat that was generated around the edge of the frame. We believed there had to be a better implementation of LED technology to illuminate graphics rather than edge lighting.”

Ultimately the company discovered that, by using a very low-wattage LED in an array layout mounted in a substrate that could also act as a heat sink/thermal manager, the maximum longevity of the LED (as specified by the manufacturer) could be achieved. This configuration also provided the even illumination they desired.

Working through many iterations of the product, the company focused on optimizing performance, while still achieving the same level of illumination, color temperature, and color rendering index. “We wanted to make sure that we met or exceeded the performance parameters of fluorescent lamps used for backlighting,” says Farrell. “We spent a great deal of time sizing the LED and using the proper LED so that our menu boards, light boxes, mall kiosks, etc., could be a direct replacement for today’s illuminators without having to ask the world to change what they were doing as far as graphics.”

The move towards energy-efficient lighting speaks to the heart of one of its clients, UGG (Deckers Corp.). This retailer called for rolling out LED light boxes in their stores, with varying degrees of illumination and graphics from store to store. “For example, we supplied dimming controls in products where UGG requested it,” says Farrell. “If a light box is restricted from ambient light in an UGG store, they set the LEDs at full brightness capability. If ambient light is available, they set it lower, since they don’t need as much lighting power to realize greater energy efficiency.”

Decisions are made based on aesthetic appeal, as well. For example, in a snow scene contrasted with dark woods, the store can adjust the illumination for the scene to display at its optimal. “They are optimizing the capabilities of our LED light box products by setting the illumination level at the right place for the location and the graphics,” adds Farrell. (Note: Case studies conducted by the client confirmed that the large LED light boxes elicit more interest from customers who often stay in the stores longer than average.)

Farrell remarks that although their products reach specific market niches, there’s broad appeal for LED all around. In addition to embracing LEDs, he adds that another cost-saving factor are power supplies that are becoming less expensive with more offerings available these days. “The idea of remote power is important,” says Farrell. “A sign on the top of a large building doesn’t have to have a high voltage attached to it. Someone doesn’t have to climb a tall building to get to the power supply since it can now be in the building.

“ Low voltage wiring is safer and doesn’t require conduit, and the power supplies can be installed remotely in a closet or anywhere fifty feet or more from the product. How does the client benefit? The installation cost is lowered, as well as the overall cost because of this simplified installation.

“We realize safety advantages because of the low voltage, and all sorts of efficiencies are gained. The power supplies we use are all modular, so they don’t require an electrician to replace them. They’re in a housing that anyone can change. The dimming capability was important to UGG, creating a good match of supplier and customer.”

Farrell adds that it’s important to have a proper thermal management, while achieving a color temperature of 4200 degrees Kelvin. “Color rendering index is also important, and LEDs can match the color rendering index of fluorescent lighting, which is important for backlighting graphics,” he says. “If you don’t do these things, the product won’t last. Some customers complain that LED products are blue, which indicates an inexpensive LED that is 5000 degrees Kelvin. There’s no use trying to fight the graphics world.”