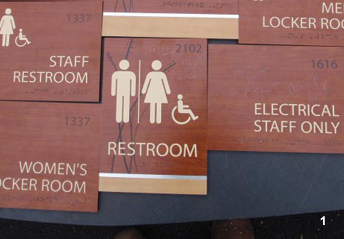 Note: Due to space considerations, the “Superfrog’s Pond” column in our September 2011 issue had to be condensed. This is the full version of the article.

Over the years, I’ve read many articles on ADA signage concerning the law and its requirements. But few of them have addressed issues like how to apply the signs, problems associated with the installs, judgment calls you have to make, fixing and re-doing a sign, patching any damaged paint and sheet rock, and making sure you don’t put the signs in the wrong place.

I actually identify with the ADA concept through a slightly indirect connection. During my years as a scuba diving instructor, I taught classes to the physically handicapped and blind/vision-impaired. These people were fantastic to work with, and more then anything, I loved their sense for life and humor. When something didn’t quite work like it was suppose to, they were the first to laugh at themselves.

For example, I remember this one young man who was missing both arms from a farm accident associated with a power take-off unit on the grain auger. The hardest problem was placing the mask on his face. The water has a tendency to loosen up any nose mucus, so of course, it sticks to your face.

During one class, I noticed an excessive amount of mucus and told him he had “booger cling-ons.” He wanted to know if that was something out of Star Trek. We laughed for at least five minutes, and from that day forward, he always asked about these nasty invaders.

I was also instrumental in establishing Braille signs and ropes between stations for the handicapped at two underwater parks in Florida and the Bahamas, so if you see me, be sure to ask me about some of the goofy, politically incorrect (not malicious or hateful) humor that my blind students used to make here.

The ADA is a typical government requirement that’s

not without flaws. Its intent is good, but the wording needs a little more flexibility and common sense.

One of the things I question is the placement of the signs. The rules indicate placing the signs sixty inches to center, but it would make more sense to place all sign bottoms to sixty inches, due to the various size signs. This would create a more consistent offering. (Note: I even tested this theory using a wheelchair.)

I recently won a contract to install 364 ADA signs in a nearby hospital (Photo 1). The job also required working with drop-down and flag-mount wayfinding signage. The only real problem associated with these types of signs, in particular the drop-down variety, is that it requires a bar on the ceiling over the T-channels, so the ceiling panels can support the weight of the sign.

So check with the job supervisor before installation to make sure you aren’t going to be blocking any exit signs. The fire marshal will definitely be on your case about this too.

As for flag-mount signs, stay at least six inches over from the door jamb or corner, so that when you put your wall dog or nylon anchor into the sheetrock, you’ll miss the steel studs.

When installing ADA signs, first get a good architectural blueprint with the room numbers labeled. Also make sure you have a magnifying glass, as well as a torpedo level.

For any questionable sign placements, put some tape in the area so that no mistakes are made. About 99 percent of ADA signs will come with VHB tape. When installing, I usually put two additional dabs of silicone on the sign as backup. It’s not really needed, but it does eliminate possible failure.

As for ADA signs, the law states that you can go two to ten inches over from the latch-side of the door. Three inches is a nice number and looks the best.

For this project, about 80 percent of the signage was the same (six inches high-by-eight inches long), so I made a jig that consisted of a pine board cut to three inches wide and sixty-eight inches tall on the table saw.

I took a cross bar that was one-inch-wide and eleven inches long and dadoed it into the three-inch board at ninety degrees or a right angle—kind of like a T-square. This allowed me to cut the end off to adjust to sixty-inch centers. For example, the sign was six inches high, so I cut the jig to fifty-seven inches—which put the center at sixty inches.

This worked so slick, as I placed it along the steel door jamb (which extended out 1/4-inch). This gave the jig a natural place to go that was square to the floor. It also automatically put the sign in place (Photo 2).

If there’s a handrail in your way (rub rails are everywhere in hospitals), use the jig. Place it on top of the metal door jamb, align the edges, push your cross bar to the wall, and place two tick marks (Photo 3).

Then place the sign to the tic marks and put the torpedo level on top of the sign for alignment (Photo 4).

If you experience incorrect placement of a sign, the best way to remove a sign with minimal damage is to use a thin, stiff-bladed knife. I put masking tape on the handle of my Swiss Army® knife, so to not mar the wall. I lay the handle flat to the wall and slide the blade under all four sides (Photo 5).

The goal: You’re trying to cut the wallpaper from the VHB tape and pull off as little wallpaper as possible. That way you can place a new sign over it and hide the damage. Wherever the silicone touches the wall, the paint and paper will be coming with it (Photo 6).

If the installation is taking place during the construction phase, make a list of damage with room numbers and tell the site supervisor. He’ll have the painters fix the wall.

If it’s a completed building, either learn how to patch the wall or contact the maintenance person for the building ahead of time to see that they have touch-up paint. Most of the time, if it’s not your mistake, you won’t have to fix anything; but if it is, be prepared.

As mentioned before, I usually apply a couple of dabs of silicone as a back-up attachment system. The best way to confine the silicone from making a mess is to buy a really good caulking gun with a hook handle. Place masking tape on the hook and back side of the caulking gun (Photo 7). This way, it won’t make a mark if it comes in contact with walls, doors, or other surfaces.

After applying the silicone to the sign’s back, don’t lay the gun down; instead hang it on a door handle, a hinge (Photo 8), or the rub rail (Photo 9). This way, it is readily available and out of your way.

If installing signs on glass, don’t use the silicone. Make your Stabilo® or masking tape marks on the inside of the glass, so that when you’re done with the install on the outside, you can remove them and not capture them under the sign. I also offered to back-up the glass with dark-brown vinyl squares to hide the VHB tape showing through the glass. The officials went for it, and it was a nice add-on.

ADA law does allow for adjustments, if needed. Some of your installs won’t make sense, but you do the best you can or shift the install responsibility to the administration. When you do this, document and date it, so that you have a record of it. And don’t forget abou it!

It’s important to stay organized, right down to the install. I do this by highlighting the room numbers with a florescent yellow marker on the blueprint and writing the changes and notes next to the number.

I also put a blanket in my wagon for padding and load the necessary signs in the order I’m going to install them. Then I pull my wagon along the hall and place the signs on the ground in front of where they go. I then go back and install using my jig.

My record for installs in one day is 223. Yes I took lunch, but I worked a nearly twelve-hour day. Unwrapping and organizing the signs by number is very important and will save you time in the long run.