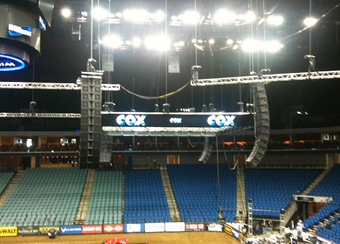 The system included twenty-four connected LED modules that created a seamless visual across 325 square feet of LED signage. Hung 25 feet about the floor in a horseshoe format, the display showed full-motion graphics and sponsor acknowledgements.

Through the agreement with Express Lazy E Sports Production, the event’s co-producer, ANC created all the still acknowledgements and full-motion animations for the bull riding event’s partners, as well as PBR graphics and crowd prompts. Two ANC technicians were on-site throughout the event to ensure the signage delivered the highest impact visuals.

Driven by ANC Sports’ patent-pending VisionSOFT™ operating system, the signage system provides new televised branding and entertainment opportunities to bull riding, such as congratulating winners. In addition, the signage is capable of synchronizing to feature one dynamic, full-motion visual that can provide moments of exclusivity or segmenting into individual images for various sponsors.

“ANC’s event digital signage enables our corporate partners a greater flexibility to promote their brands both inside the venue and for viewers watching on television,” said Bob Funk Jr., chief executive officer of Express Lazy E Sports Production. “We look forward to working with ANC to integrate the technology into other customized positions, which generate visibility for our partners in the future.”

Three Reasons Why Your Shop is Ready to Sell Digital Signage