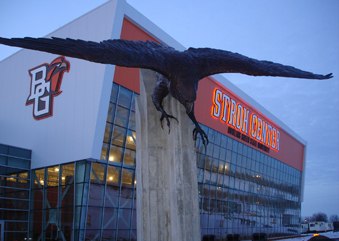 This past summer, the brand-new Stroh Center landed on Bowling Green State University’s (BGSU) campus in Ohio. The athletic facility houses the Falcons men’s and women’s basketball and volleyball teams and also serves as a venue for concerts and campus events.

The complex also sports some winning signage of its own thanks to Toledo Sign Company. The shop took the ball on this job after bidding on the project and scoring with a sixty-five-page sign package.

Toledo Sign is a full-service sign shop that’s been making signs for four generations. Its history and experience rose to the forefront when it was tasked with creating a large variety of indoor/outdoor signs for the new Stroh Center. The company had about a year to fabricate the various sign pieces, while the building was being constructed.

Following the architects’ and designers’ plans, Toledo Sign constructed and installed outdoor channel letters, a sign box, and dimensional logos, as well as a number of interior identification signs. The shop was also tasked with etching wording into a granite sculpture.

One of the biggest challenges, however, was the main set of channel letters on the outside of the building.

Two sets of letters grace the front fascia of the Stroh Center. Both sets were fabricated from 1/8-inch-thick aluminum and routed with a Gerber AR600. The sub-line reads “Bowling Green State University” in thirty-inch-tall, non-illuminated letters. These letters were fitted with two-inch returns and stud-mounted to the building.

Above the sub-line, a set of illuminated, ten-foot tall channel letters spell out “Stroh Center.” The letters were fabricated in two pieces and painted brown and white using low-VOC Matthew’s Paint.

The designers’ plans called for the channel letters to create a halo effect on the surface of the building, so Toledo Sign created two mock-ups featuring school colors: one with orange LEDs and one with white LEDs. University officials chose to go with orange.

The shop used orange SloanLED™ V Series LEDs, which were nearest in hue to the Falcons’ orange. “We tried to get it as close to PMS-172 as possible,” says Brian Heil, owner and vice president of Toledo Sign.

Before fabrication could begin, Toledo Sign faced a challenge—the building’s fascia was a semi-gloss surface. “They wanted a halo effect, but the background was a semi-gloss. You can’t get a uniform, halo effect with anything but a flat surface,” says Heil, “so we had to make some mock-ups and play around with it. We had to figure out how we could get a nice halo on a semi-gloss background.

“It involved quite a few trial runs.”

Toledo Sign started by moving the LEDs in four inches from the edge of the letter. They also doubled the amount of LEDs and spaced them half-an-inch apart.

A two-inch forward return was fastened to the back of the letters to create a gap. “We had a two-inch gap for the light to flood out,” says Heil. “We enclosed the two-inch gap with Lexan®, then applied 3M dusted crystal vinyl diffuser in order to eliminate the reflection.”

This method succeeded in achieving an even halo glow on the surface of the building.

With the halo effect solved, Toledo Sign moved on to its next challenge: the installation. For starters, the shop had to really extend its wingspan in order to reach the job site. “We couldn’t set up underneath the signage, because the concrete had already been poured. They didn’t want us driving on that, so we had quite a reach to hang the letters,” says Heil.

A grassy area with a sprinkler system beside the concrete walkway also posed an issue, so Toledo Sign was forced to set up in the parking lot and reach across. To accomplish this, the shop used its 110-foot National Crane to hoist the letters, and it rented a 150-foot JLG so installers could reach the site.

With a three-man crew, Toledo Sign started the install, which required careful planning, because the fascia of the building sloped away from the installers and an overhang at the top caused additional problems. Using creative thinking, Toledo Sign created a four-by-two-inch aluminum frame and fastened the back of the letters to it.

The LEDs were then mounted to the backside of the letters, and the power supplies were mounted inside the bottom of the back of the letters. The faces of the letters (which have a three-inch return) were then put in place. The entire install took about a week.

In addition to the main set of channel letters, Toledo Sign also fabricated and installed two BGSU logos for the side of the building. Routed on a Gerber AR600 from 1/8-inch aluminum, the fifteen-foot-tall logos were non-illuminated and painted with Matthews Paint. Each logo featured three layers for a dimensional look.

Once again, Toledo Sign had to set up in the parking lot and use its National Crane and rented JLG to reach the job site. And once again, an aluminum grid was created and fastened to the building’s structural steel.

Using a two-man crew, each of the logo’s layers was then mounted. “The first layer we fastened and screwed in place into the sides,” says Heil. “After the first layer was on, there was angle iron mounted to the first surface, and we had to piece the next color onto that.

“Once again, that had angle iron mounted on the face in order to have the third layer fasten on top of that.”

The installation of this sign required the use of the company’s National Crane, as well as scaffolding. The supports for the sign had to be figured out first. “We had to mount the sign onto an eight-inch vertical steel tube that was part of the structure of the building,” says Heil. “[Because of this], we had to fabricate some steel plate brackets. We had to drill and tab them onto the existing steel tube.

“It took us a full day to fasten those in place, before we came in to hang the sign.”

With the supports in place, the sign only took another day to install.

Two additional signage pieces rounded out the exterior. A standard set of five-inch-deep aluminum, face-lit channel letters spelling out “Schmidthorst Pavilion” were created to designate the practice space at the facility. The letters were illuminated with V Series LEDs and fastened directly to the wall.

In addition, Toledo Sign was tasked with etching a dedication into a sculpture featuring BGSU’s falcon mascot atop a granite column. The shop sandblasted the column on-site using a template.

The pennant signs were solid aluminum, so they required strong supports. Similar to the Falcon Team Store sign, Toledo Sign mounted the pennants to the vertical supports of the building using round brackets. The section signs were stud-mounted into a steel header in the wall.

The interior of the center also features over one hundred zinc ADA signs. The architect provided the design for the signage, but together with Vivid Manufacturing, Toledo Sign had to make some changes to the design. “There’s a process zinc goes through, and we had to tweak it in order for it to be fabricated in the proper way,” says Heil. (Note: The ADA signs were outsourced to Vivid Manufacturing for fabrication, and Toledo Sign then installed them at the facility.)

Overall, the entire project took about 1,250 hours—750 hours in fabrication, and an additional 500 hours in installation.

On a sign project with this many components, Heil stresses that teamwork was essential. “Particularly here communication between the architect, the general contractor, and the sign contractor,” he says.

The teamwork appears to have paid off for this winning project, because BGSU was “bowled” over by the results.

A Simple Solution for Illuminating Single- and Double-Sided Cabinets