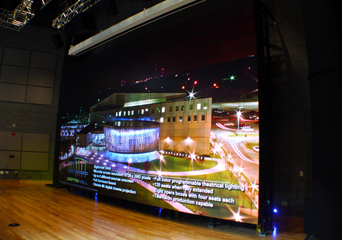 The installs both used Christie® MicroTiles®, which are modular digital display tiles that can be stacked and clustered like building blocks to create display walls of any shape or scale. They are also “self-aware”—meaning that the sensors built into the MicroTiles automatically complete time-consuming and costly color calibration needed to keep conventional video walls looking uniform.

Read up on the installs below to learn how Christie was able to transform the locations.

Northern Kentucky University’s College of Informatics is at the forefront of technology thanks to a Christie MicroTiles array, four Christie projectors, and two Christie Spyder X20-1608 image processors managing and controlling all of the content.

The 19-wide-by-15-high (25 feet wide-by-15 feet high) Christie MicroTile array is located in the Digitorium of Griffin Hall, which is the University’s first LEED-certified building. The array handles a variety of virtual performances, workflow modeling, 3D visualization, and more, which is all fed to the Christie MicroTiles by the Spyders.

“The number of sources we feed into the tiles from the Spyders is huge,” said Shawn Samii, project manager, Diversified Systems, project integrator. “The MicroTiles receive several feeds including streaming video, HDMI out of a laptop, display footage out of a laptop, AV, cable TV feed, PC graphics, static images, and broadcast STI feeds.”

The main Digitorium projector is one Christie HD6K-M with three Christie LW650 projectors located outside the auditorium.

Christie was charged with installing and integrating this digital signage array in just six months. “This project had a strict deadline and it wasn’t an option to miss the opening date of Griffin Hall,” said Kevin Collins, executive vice president and chief operating officer, Diversified Systems. “But integration went smoothly. In fact, it went up just like 1-2-3 and was a textbook integration.”

“Everybody who has looked at the MicroTiles wall is in utter disbelief,” added Samii. “The wall is truly a sight to behold.”

New science center TELUS Spark is welcoming its visitors with the help of forty-eight Christie® MicroTiles® and an assortment of Christie projectors. The center opened October 29, 2011 in Calgary, Alberta for people of all ages and abilities to explore and discover science, technology, and art in new ways.

The two-story-tall atrium houses an eight-unit-wide-by-six-unit-tall Christie MicroTiles array set between the Feature Gallery and the gift store. “The Atrium is where we have a space for discovery leaders and hosts to deliver presentations and for informing people about what is happening at the center,” said Dennis Cheng, audio video manager, TELUS Spark. “There is a very large picture window on the south side of the atrium that lets in a lot of sunlight. In fact, it lights up the entire atrium. We needed a technology to overcome that issue. The MicroTiles are LED-based and were the only product bright enough to overcome that large amount of ambient light.”

“People look down at the display from any angle and are quite impressed by what they see,” added Barry Crean, vice-president of Operations. (Note: A second wall, comprising twenty-two Christie MicroTiles and slated for installation this year, will act as a donor wall to recognize large-scale donations.)

Cheng explained that as a new building, TELUS Spark is poised to attract a wide variety of special events and the Atrium is the perfect place to stage these opportunities. Because of the ambient light on the south end of atrium, they needed a projector to overcome the light challenges and selected to use the Christie Roadie HD+35K. “The Roadie projects 100 feet away onto a 30-by-16-foot screen that is suspended from a movable truss over 30 feet above the atrium floor,” said Cheng.

The center also has seven Christie DWU67-E 1-chip DLP® projectors with four dedicated to the Open Studio gallery. Catering to youth, the Open Studio allows participants to digitally paint with light or compose a symphony with color. The finished artwork or composition is then projected onto one of four screens. (Note: Of the remaining three projectors, one is in the Being Human gallery, and the other two are on mobile carts, used throughout the science center.)

A Christie DS+750 1-chip DLP® projector is used at the Shadow Rock exhibit in the Open Studio gallery. “[And] the final Christie projector we have is the [all-in-one digital cinema projector] Christie CP2220, located in our 164-seat Presentation Theatre,” said Crean.