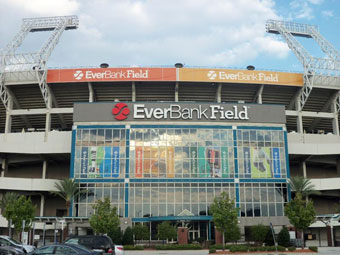 The recently renamed 67,246-seat EverBank Field, home stadium to the NFL’s Jacksonville Jaguars of Jacksonville, Florida, received a new vinyl face identity and logo name trim just in time before its Monday Night Football game this past October 18 against the Tennessee Titans.

Like the old high school football cheer—”They want to know who we are, so we tell them”—the new wrap shows the world just who plays what on the field and who sponsors them.

The graphic designers expect the graphics to last at least four to five years, which is the product’s designed life span. Carthey’s company swears by their 3M product installations, but they also understand the politics of sponsorships, advertising, and promotion in a competitive market. What goes up only stays up for as long as it sells what it displays. “The product is unfailing, but these things can change that fast,” says Corporate Installations Owner and President John Carthey, who sees about eighteen months of life from the current work. “So the product often outlives the project.”

Briefly, the story goes that the wrap shop, Wrapid Impressions of Jacksonville, Florida, dropped off a brick wrapped in vinyl at the football team’s stadium to introduce the Jaguars to the company’s wrap business. “We thought that it would be a great opportunity to be proactive, so we [delivered] a few samples to make sure that we were in the best position possible for future opportunities. We’re strictly a wrap shop, so we typically wrap concrete bricks with our information on it and [use this] as our sample,” says Brandon Clark, president of Wrapid Impressions. “It’s funny the reaction that you get from people when you hand them a brick. They honestly have no idea what to do with it, so it keeps making its way around the office. It’s not like you throw a brick in the trash can, so it ends up getting moved around the desk a lot.”

At the same time, the financial institution EverBank announced that it had purchased the naming rights of the Jacksonville Municipal Stadium. When EverBank sat down with its ad agency (Forty Forty) and the stadium owners, the Jaguar execs showed them the brick.
The result: Wrapid Impressions was hired, and Clark put the job out to bid. Carthey’s company participated in that bid to win the installation business.

By the time they had finished their work, Carthey’s crew had worked on a job of monumental size. “The initial size of the project definitely sets it aside from previous work that we’ve done. Because of the size, [it feels like] we actually used all of the available IJ170Cv3 in the entire country,” says Clark. “One of the biggest challenges that we faced was locating the material, allowing for the recommended outgassing and dry time suggested by 3M, shipping the product to the stadium, and completing the project before its reveal on the televised game against the Titans.”

Carthey’s men worked on about 5,000 square feet of the project, some of which had to be redone after a previous install didn’t meet standards EverBank hoped for. The banners run around the top of the stadium and displays EverBank’s name.

In addition to the 3M vinyl and overlaminate, Carthey’s team and Wrapid Impressions also utilized 3M primer and edge sealer to ensure proper adhesion to the surface. They first cleaned the concrete stadium walls with a pressure hose that shot a mixture of warm water and vinegar as they scrubbed down the surface and followed that with 3M™ Tape Primer 94 and finished the panels with the 3M™ Edge Sealer. “Because we were wrapping a precast smooth concrete surface, we knew that the IJ170Cv3 would be more aggressive and speed up the installation process,” says Clark.

After priming the surface, they began installing. “The vinyl was about twelve feet tall all around,” explains Carthey, “and we had to fit it around the steel roof beams sticking out the [exterior] of the building. It was tough getting our scaffolding up there on the side of that building to get this job done.”

It took twelve Corporate Installations installers, who worked 200 feet in the air on portable scaffolding for eight to ten hours a day, to complete the job by the scheduled due date. “These guys worked hard under pressure and in a difficult and scary position hanging from the side of the stadium walls,” says Carthey. “The men wore hard hats, steel-toed boots, and harnesses with short lanyards. Their professionalism and ability to adapt in situations beyond their control was amazing, and their positive outlook kept the moral of the team high and motivated.”

This type of sign work adds new liability to a project (especially for personal injury), because of the height at which the crews had to work. Each party that participates in the work has to explain how it plans to perform the job, estimate a realistic completion date, and detail the equipment it plans to use.

Corporate Installations tried scheduling their work around the position of the sun. “We wanted to work in the shade on some parts of the project and in the sunlight in others to control the temperature of the vinyl and its stretch,” says Carthey. “We had to work mornings, evenings, and nights on the sides with direct sun. The 3M IJ170Cv3 would heat up and stretch if we didn’t do this. Plus the scaffolding company couldn’t keep up with moving the scaffolding in any kind of timely manner, so [we] had down time to deal with.

“In some places, we had to remove and replace the vinyl to straighten it out.”

The project was pulled off in time for the scheduled national reveal and hopefull expand to customers what can be done with vinyl. “[Here] we really wanted to show people the possibilities of the wrap industry, and that it’s a lot more then just vehicles,” says Clark.