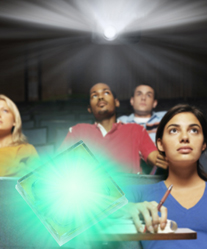 OSRAM Opto Semiconductors has developed a pre-production green LED based on the OSTAR platform that is twice as bright as its predecessors and has a luminous surface that is perfectly uniform. This single-chip LED benefits from the latest chip technology and a green phosphor converter. Initial samples are already available, and OSRAM is currently working with partners to develop appropriate LED data projectors such as those used in the office and education markets.  OSRAM Opto Semiconductors expects the LED to be widely available to projector manufacturers in the summer of 2011.

Now that RGB LEDs have already been established as the dominant technology to drive sequential color pico projectors, the next segment of growth is data projectors. This progression has been made possible by the enormous brightness increase of OSRAM’s green LEDs. The prototype with a single chip achieves 410 lm and emits at a wavelength of 553 nm.

Since a greater proportion of green than red or blue is needed in a projector to produce white light, the increase in the brightness of the green LED has a significant effect on the overall system brightness. With these new LED prototypes, it is possible to produce systems that deliver an overall brightness of 2,000 lm, which is required for office and education applications. LED projectors will soon be powerful enough for screen sizes of more than two meters diagonal. Until now, such applications have only been possible with projectors that use conventional light sources such as high-intensity discharge lamps.

“Doubling the brightness of the green LED is a giant leap forward and removes the restriction that LEDs are suitable only for small projectors,” said Michael Godwin, director of LED Marketing at OSRAM Opto Semiconductors.

Apart from providing brilliant image reproduction with saturated colors, LEDs enable projectors to be virtually maintenance-free because they have a life expectancy of over 30,000 hours. By contrast, high-intensity discharge lamps need to be replaced after only about 4,000 hours. Projectors with LEDs also provide instant power on, and they support seamless dimming. They can, therefore, adapt very easily to ambient light conditions, which leads to reduced energy consumption. The color space can be set with a high degree of flexibility thanks to fine electronic control of the individual colors.

Thanks to the new high-brightness green LEDs, the LED projectors of the future will be able to produce images with diagonals of several meters. The projected images themselves will appear brighter than those produced by conventional light sources with similar lumen rating thanks to the saturated colors of the LEDs used.