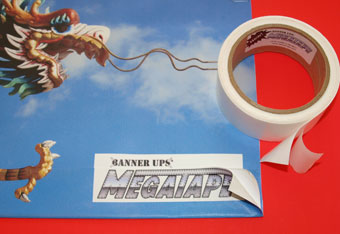 TM is made of the same super-strong film as PowerTape®, but is adhesive coated on both sides. This provides banner makers with the strength of PowerTape® and the fold-finished banner edge which some prefer in a single product. Available in a 1.5-inch width, MegaTapeTM is applied just like ordinary double-sided banner hem tape, but has more than triple the strength, plus it adds firmness to the banner edge for a much cleaner appearance. Banners made with MegaTapeTM have withstood winds of over 90 MPH in wind tunnel tests. Also, MegaTapeTM can be used to reinforce hems in two-sided banners, as the tape itself is invisible after folded into the hem.

“Customers have been asking for a double-sided version of PowerTape® for years,” said company President Rick Hatton. “Using MegaTapeTM together with our PowerTabs is a faster, easier, and ultimately less expensive way to make banners compared to ordinary tape and grommets.”