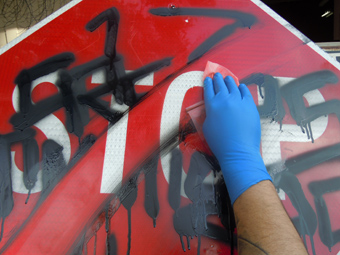 Graffiti removal is treated like a menial job, and it’s not, says Adam Kopcho, director of Urban Restoration Group, U.S., Inc. (www.graffitiremovalinc.com), in Glendale, California. “In the end, you’re cleaning and restoring people’s property without showing evidence you’ve been through.”

For Kopcho, whose company sells only products relating to graffiti removal, business is booming. Municipalities throughout California are using one of his company’s products—Graffiti “Safewipes”—to encourage volunteers to fight the blight of tagged signage.

Dan Rasper is part of an anti-graffiti movement that is sweeping the country, due in part to the convenience factor associated with disposable, biodegradable cleaning wipes. In a February 6 article in The Signal in Santa Clarita, California, reporter Laura Dixon said Rasper, an Imperial County firefighter, received the “Person of Character and Kindness Award.” The Santa Clarita Parks, Recreation, and Community Services Commission bestowed the award on Feb. 3, 2011, for Rasper’s efforts to clean off more than 2,000 graffiti-tags on public property over the past two years.

[Rasper] often pulls his car over and searches for his stash of graffiti wipes, if he notices any new tags while driving around town,” reported Dixon.

Graffiti wipes are effective (in part because they are convenient to use) as battling the vandals is more likely to succeed in an area when graffiti is quickly removed.

“It’s a big sociological issue,” says Kopcho. “If a sign is placed in a graffiti-prone area, a sign builder has two choices: using a protective coating that makes graffiti easier to remove, or erecting a sign that can be quickly cleaned by graffiti wipes.”

For graffiti-prone areas, “they have to think about specifying materials with the most gentle of product,” or using a laminate or protective coating, says Kopcho, as some products made of harsh solvents can dry films, and they can become brittle, losing their protective qualities.

Randy Frees, president of Soy Technologies, LLC (www.soytek.com) in Nicholasville, Kentucky, says his company’s graffiti removal product line has been certified by the EPA as eco-friendly and has also qualified for the USDA’s BioPreferred program. The line includes industrial-sized graffiti wipes. Frees hasn’t seen a big increase in demand for the industrial-sized wipes. However many of his customers have used trigger sprays and the graffiti-removing products that come in industrial canisters.

Frees says the removers have a soy-oil methyl-ester base and are “safe for the user, the earth, and the air,” offering a “legitimate alternative to petrochemicals.”

Robert Haselwood of Berryton, Kansas is part of a group (United Soybean Board) that has promoted the use of soy in graffiti-removal products. Haselwood lives on a hard-to-find, dead-end road in a rural area. Fifteen years ago, graffiti mysteriously sprouted on his shed one night, and it’s still there.

“There was no way to use that for communication,” says Haselwood with a laugh. “No one can see it.”