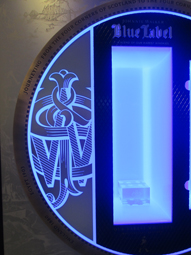 Sometimes it’s the smallest details that can make the biggest difference on a project, and this is something SBC Laser recognizes.

SBC Laser, a division of SBC Industries, was established when the roofing division of the company decided to look into alternatives to making their penetration flashings by hand. They settled on laser engraving and purchased a Kern Laser Systems custom-built, 150-watt, 52-by-120-inch machine that could handle the 26-gauge stainless steel sheets the business typically works with.

It didn’t take long however for SBC to realize that the engraver had capabilities that stretched far beyond those stainless steel sheets.

“We saw the potential in what the system could actually do,” says Nick Caito, production and operations manager at SBC Laser. “So we started looking at it as a job shop, opening up a new division—SBC Laser.”

Since SBC Laser was established, it has handled jobs as varied as cutting out various shapes and logos to etching designs onto pool table felt to creating shoe templates for footwear companies.

One of its most recent projects was an intricate wall display unit for Johnnie Walker® Scotch Whisky. “The Johnnie Walker panels have probably been the most complicated and involved combination of materials, settings, and design we’ve taken on to date,” says Caito.

SBC was brought onto the job through an inquiry on Facebook, which Caito finds to be a valuable asset to his business. “Social media is just so much easier to push this type of work. Everybody’s social media-based these days,” he says. “I’ll post a picture and within two days we’ve reached 500 to 600 people.”

Together with the interior architectural design firm Bloom Interior Architecture (which creates build-outs for liquor stores), SBC Laser started work on creating a display worth toasting.

When SBC Laser receives renderings for a project, it typically works with them in CorelDRAW.

“The [Kern] machine acts like a big printer from CorelDRAW,” explains Caito. “It registers everything from CorelDRAW and just about anything is importable into CorelDRAW.” (Note: The software can also read CAD files, which SBC frequently works in, as well.)

SBC also uses the software add-on PhotoGraV, which allows scanned photography to be properly etched out on a variety of substrates (granite, stone, or wood) through a series of settings and conversions.

On this particular project, SBC received the concept for the Johnnie Walker panel from London, but it was immediately met with a challenge. The London concept was built at seven feet tall, but SBC had to scale it down to a twenty-four-inch-diameter circle that was planned for the U.S. version.

To do this, SBC had to remap and reconsider the design.

They knew right away that using a CNC router wouldn’t work. “Basically they used a CNC router on the large-scale one and prefabricated these panels,” says Caito. “Well this being as small as it is and as intricate as it was, the CNC just chopped everything up to where it wasn’t usable.”

In order to achieve the intricate details and keep the surface and cut lines clean and free of snags and debris, SBC turned to its laser engraver.

Starting with a 1/4-inch-thick piece of black acrylic, SBC Laser simultaneously etched a diamond pattern and the inlay spaces for the Striding Man logo and the letters spelling out “Johnnie Walker,” “A blend of our rarest whiskies,” and “Masterfully blended.”

The etching was accomplished by employing a multiple-pass process on the laser ranging from 40 inches/second to 90 inches/second with a variation of power based on the speed. The laser was at 100 percent power most of the time.

SBC Laser then came back to the same file where it had cut lines also programmed in for the circular shape of one of the overall panels, the two rectangular spaces for bottles, and the “Blue Label” lettering inlay at the top.

Next SBC began working on the letters that would be placed in the inlays.The client had requested that these letters have a metallic look.

Knowing it had more engraving options with plastic, SBC opted to use Bur-Lane plastics with a finish that mimics brushed metal. “Also the plastic has a 3M self-adhesive backing, making installation a little easier,” says Caito.

SBC immediately ran into a challenge with the small size of the letters—even with the laser beam width only measuring 5000th of an inch. “When you cut that file, the lines are so close to each other, and that material is only so strong and it melts away,” says Caito. “So we went back to the drawing board and created artwork again using the text font and style and reverse-3D engraved the letters.

“So we’re taking that piece of material and etching away everything around those letters except for the letters themselves.” (Note: SBC cut the letters out at a speed of 40 inches/second.)

SBC Laser also cut out a rectangle, which holds the letters. “To keep everything together, running right across the middle of the letters, we made a smaller rectangle that spans across. It’s set to a lighter power setting so that it goes all the way through except it doesn’t break it,” says Caito. “So now you’ve got this long strip that has all the individual letters on it.”

When the third-party installers received the elements, they simply snapped each letter off the rectangle and placed it into the inlays. The 3M adhesive backing held the letters in place.

SBC also fabricated letters for the “Blue Label” inlay. The company started with a translucent white, light-diffusing acrylic, and at 100 percent power, laser-cut the script letter pattern into it.

SBC then took a thinner, .02-inch-thick version of the Bur-Lane plastic with the metallic finish and cut the letter pattern into this.

When the pieces were installed, the acrylic was inlaid into the proper space where it protrudes 1/8-inch off the panel. The metallic plastic was affixed to the top of the acrylic. (Note: When the display is lit, the raised lettering produces a halo lighting effect.)

SBC also handled the “JW” logo on the left-hand side of the circle by etching 1/16-inch-deep into the white acrylic.

It then took the brushed metal Bur-Lane plastic used in other parts of the project and, employing a vector file of the “JW” logo, vector-cut individual pieces out. These pieces were then placed into the inlays on the acrylic panel.

The finished circular display is affixed to a solid, milky white acrylic panel that’s backlit with blue lighting so that all of the elements glow blue.

Closing Out the Tab

SBC Laser also fabricated a few other pieces to round out the units.

The company cut the letters “Johnnie Walker” out of Bur-Lane plastic with a brass finish. These letters were inlaid into wood and served as a header.

SBC also etched “Exclusive to Travellers” into a brass strip, which served as a subhead to the unit.

Finally SBC etched intricate artwork into a silver, square sheet of anodized aluminum that surrounds the circular panels. They set up the artwork for etching using their CorelDRAW software.

“We imported the customer’s provided .ai artwork directly into CorelDRAW and modified it from there,” says Caito, explaining the company cut the sheet to size and shape and then laser-etched the artwork into it.

The client was so impressed by the finished products that they’re considering an order of even more display units.

To learn more about SBC Laser, visit www.sbclaser.com or check them out at www.facebook.com/SBCLaser. 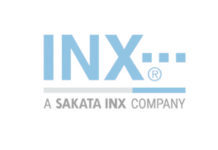