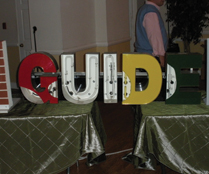 In one of my former lives, several decades ago, I remember an architect once called me up and asked me for “data” on why it was that we mounted fluorescent lamps on twelve-inch centers. I immediately responded, “Data?”

As she tried to muffle the phone, I heard her tell the others in her office that this sign guy didn’t know what “data” they want to back his claim…then followed by a laugh from the other architects.

Well to me, it was embarrassing, to say the least. But as they say, time heals all wounds, and (as luck would have it) some years later, I had the great fortune of actually getting involved in the architectural lighting business parallel to my sign knowledge.

Fast-forward to today, and some of us sign people still use good old “seat of the pants” eyeballing to make decisions. However with our ever-increasing technology advancements, the sign industry still needs pertinent “data,” especially when it comes to lighting.

Let’s talk sign cabinet lighting here—the industry standard of fluorescents. I can only surmise our standard twelve inches on center for fluorescent lamps was simply a trial-and-error approach. (Note: And to think this was done before more standard depth extrusions is even more amazing.) To keep focused and not turn this into a major white paper, we’ll simply state that fluorescent lamps light up sign cabinets effectively.

But let’s get to the point of this article: LED technology and cabinet lighting. I’m sure many of you have tried channel letter LED modules to illuminate a sign cabinet. Enter the mind of the creative sign guy and most of us can admit to trying all types of methods to use channel letter LEDs in a manner that they weren’t designed for. If we were in a room, I’d wager that the stories and laughs here could fill up our afternoon.

For double-face (D/F) sign cabinet lighting, I’ll bet someone used chicken wire with modules on both sides—the same for clear and white plastic and even pre-painted metal. These ideas are all time-consuming and not as cheap we might’ve originally thought, but hey, it was LED! And these probably provided marginal to OK results.

Now enter LED modules that are designed for cabinet lighting. The mechanical advantages are apparent, and lighting a sign face with LED has now entered a new era! Are you onboard with this?

However again we must control our very creative manufacturing abilities that always lead us to bypass the rules—at least at first.

Most everyone today understands LED is a point source of light with 180 degrees of illumination at its best. This point of light, even for channel letters, has its limitations. Sometimes vendors even have to design an alternative. Traditionally we still have to remember that LED is a point source of light where the light is directed to a specific place (also known as “beam” angle).

Currently there are two primary choices of LED cabinet lighting: (1.) Those that simulate the basic fluorescent layout and have a direct beam of light, and (2.) those that have an indirect beam (not directly hitting the face).

Say one vendor designs an aluminum extrusion bar system. Meanwhile another molds a specially designed clamshell bar-type system with end caps for mounting, straps for holding the polycarbonate in place during shipping, and long-term protection from possible heat concerns. As luck would have it, these are two primary indirect offerings.As you can see, you have numerous ways to use LED to illuminate any given sign cabinet. Let’s look at these variables and the potential upsides and downsides.

Channel letter LED. Hopefully this is self-explanatory, as it has been used for several years. To recap: There are high module counts and high labor to keep everything in a neat line. (Modules are used that aren’t designed for large open areas to provide even lumen across the sign face with marginal to acceptable success). Oh and don’t forget about the finger crossing that’s involved in hoping that all of the modules are attached correctly!

Bar-type systems. Currently these are designed as cabinet lighting systems that have one price for single-face (S/F) and another for D/F. One of these systems even has one voltage for S/F (12VDC) and another for D/F (24VDC).  In general, they’re mounted just like fluorescent tubes and simulate the look of them. Confused yet?

One of these bar systems arrives with modules pre-spaced for a very specific distance. Change that distance and you’ll need to change the module placement on every bar and even close the bar spacing. If there’s a learning curve, it’s “read the instructions” (if there are any). If there are no instructions, call the SSD or the factory to get it right the first time.

A clamshell-type system also demands a very specific mounting/spacing of the modules along the length of the tube. Change it up at your own testing and expertise.

This is a multiple-part system that needs your attention. Potential concerns: permanently gluing or cementing the modules in place can cause future higher-than-normal service or replacement costs. Hopefully there will be an easier solution!

Indirect systems. As LED is a point source of light, mounting the module to indirectly shine on the face offers up some interesting alternatives. One solution allows the modules to be mounted right to the existing raceway cover for a very easy install. The modules typically get mounted on opposing sides or all four sides, depending on the manufacturer.

One option uses high-brightness LED and a secondary lens/cover to help control the beam pattern. The high-brightness LED generates more heat and, thus, the “system” arrives in specific lengths, whereas the other employs a first-generation optic to offer precision beam control of the available light. To be fair, these systems also have minimum face-to-module distances, as they use the actual cavity (interior space) of the cabinet to bounce and mix the available light.

An advantage to this indirect type of system versus a fluorescent-placement type system where the light bars or tubes cover the whole area behind the face is that, if the face is ever vandalized, there’s a higher chance that the rest of the sign can still illuminate (as the LEDs are mounted somewhat out of harm’s way).
In conclusion, all of these options work. The bar-type systems do have some similarities in layout and costs, and they do follow tradition by simulating the fluorescent fabrication techniques. The indirect systems offer another thought process, again accomplishing the same result when completed—even face illumination when installed correctly.

As always, be sure to do your research on this subject matter, ask questions, and listen to your vendors. After all, they should know how to use their own products!