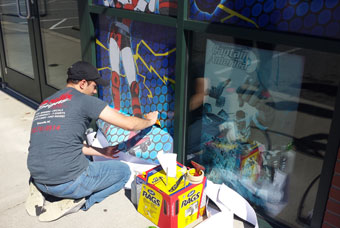 In our October 2015 issue, we showed how World’s Coolest Comics & Collectible Toys in Winterville, North Carolina designed their identity sign (“The Non-Secret Identity”). Recently the shop opened a new location at a strip mall in nearby Greenville, and Co-Owner JR Verheul moved the original sign there and installed a set of LED channel letters.

However to protect the comics and merchandise inside from sun exposure (and to enhance what his store offered), Verheul also had local sign shop, 3rd Degree Signs, provide and install see-thru vinyl prints featuring some of today’s most popular comic book characters, such as Harley Quinn, Deadpool, Batman, The Flash, Power Girl, Superman, and Wolverine. (Note: The layout even features a tiny Ant Man character on it to reward those paying close attention.)

The sign shop had already provided retractable vinyl banners for Verheul to display at local events, and during the design process, they suggested reusing the distinctive blue background featured on the banners for these graphics as well. This would extend their branding theme.

After measurements for the windows were taken, Designer Andy Sugg started manipulating the separate comic book character images provided by Verheul into one collage.

However some of the original art was too low-res for large format production, so Sugg retraced them in Illustrator and turned them into sizable vectors that would eliminate blurry pixels.

Ian Oliver, owner of 3rd Degree Signs, and his brother James marked the back of each of the fourteen MACtac JT 5817 P semi-permanent adhesive perforated vinyl panels with the appropriate window location. This aided in their placement during installation.

Ian and James first temporarily removed the rubber moulding around each window, washed each pane with soapy water, and installed the 36-by-40-inch graphic panels via the dry method using a felt tip squeegee and an X-ACTO® knife. (Note: Ian and James also installed see-thru vinyl bands featuring buzzwords like “Toys,” “Trades,” and “Comic Books” above the main graphics. The two bands over the front doors measure 6-by-34 inches, while the ones above the windows are 7-by-36 inches.)

“My father was in the sign business, and my brother and I actually started off doing decals back in high school,” says Ian. “We really enjoy designing and putting up window graphics. These types of [signs] let a storefront come to life and grab attention.”

The new window graphics have not only drawn praise from customers, they’ve also attracted excitement from comic book artists Jimmy Palmiotti and Amanda Conner who saw the new store window designs (featuring some of their characters) on the store’s social media accounts.

In fact, the see-thru vinyl graphics are currently nominated for the Diamond Comic Distributors Best Practice Awards Summer 2016 for comic book retailers in the category of “Best Window Displays.” The winner will be announced next month.