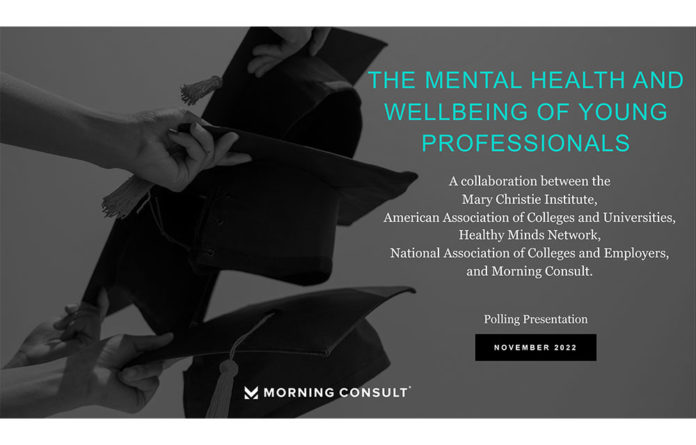 College graduates in their early careers report significant mental health issues and view their jobs as a contributing factor, according to findings from a new survey released by the Mary Christie Institute (MCI), a thought leadership organization dedicated to the emotional and behavioral health of young adults, in partnership with the Healthy Minds Network (HMN), the American Association of Colleges and Universities (AAC&U), and the National Association of Colleges and Employers (NACE).

The survey, which included over 1,000 working adults between the ages of 22-28 with at least a bachelor’s degree, was conducted by Morning Consult and was funded by a gift from the KellWell Foundation with support from Boston Scientific.

According to the survey, a majority (51 percent) of young professionals report having needed help for emotional or mental health problems in the past year. Nearly half (45 percent) believe their work environment has taken a negative toll on their own mental health. More than half (53 percent) are experiencing burnout at least once a week, defined as physical and emotional exhaustion related to one’s work. Women and those with financial stress reported worse mental health overall.

“This is more evidence that mental health problems, particularly stress and anxiety, are extending beyond college and into the workplace,” said Sarah Ketchen Lipson, PhD, EdM, of the Boston University School of Public Health and the Healthy Minds Network, who advised on the survey. “We know that meeting the mental health needs of young people in college benefits not only students but also institutions.

“In much the same way, supporting the mental health of young professionals is likely to benefit employee productivity and retention, thus influencing the success of entire organizations.” 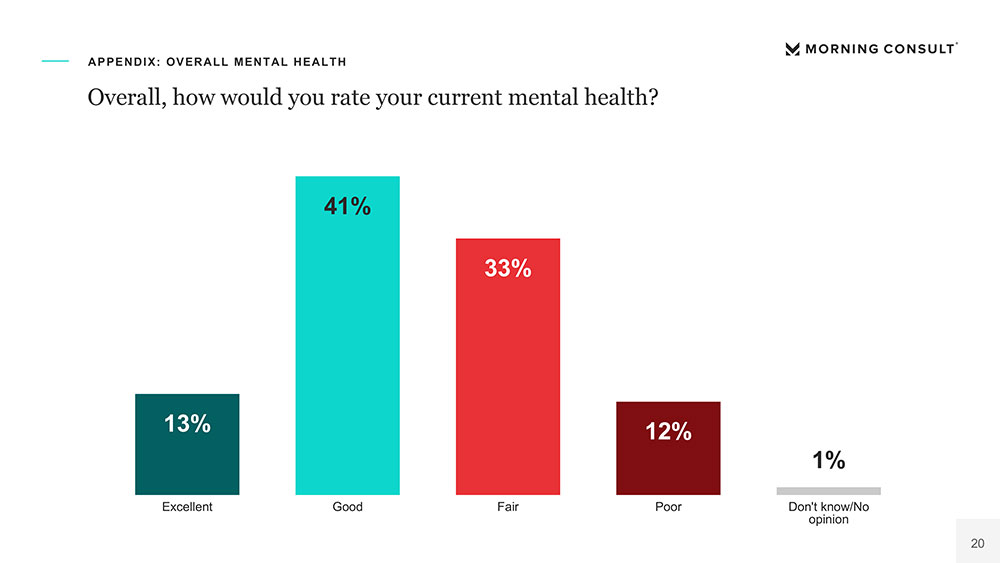 A strong majority (58 percent) of young professionals believe their employers should invest more in mental health support. Almost half (43 percent) say they would reach out to their supervisors if they had a problem they believed to be affecting their job performance, and an overwhelming majority (91 percent) of those who had spoken to someone at work said the response was supportive.

“These findings should encourage leaders in higher education and the workforce to see each other as partners in supporting the mental health and wellbeing of young professionals. The social and emotional resources they gain as students become essential strengths when starting their careers,” said Lynn Pasquerella, President of the American Association of Colleges and Universities, a partner on the survey.

The survey also asked respondents if they believed their college prepared them with the emotional or behavioral skills needed for the workplace, in an effort to help colleges examine their role in the emotional preparedness of young workers. Thirty-nine percent say it did; 39 percent also said it did not, raising questions about how proactive colleges are in including emotional and mental health in their career development or in their pedagogy.

“One of our study’s key findings is that nearly 40 percent of respondents felt unprepared emotionally for the workplace,” said Shawn VanDerziel, Executive Director of the National Association of Colleges and Employers, which also partnered in the project. “This is an opportunity for colleges to consider what experiences—such as internships—can help students build emotional intelligence around work and the workplace.

“For employers, the finding is a signal to ramp up support for all their employees and especially for new entry-level hires.”

More than half of young professionals report emotional or mental health challenges, and these challenges vary by gender and race. 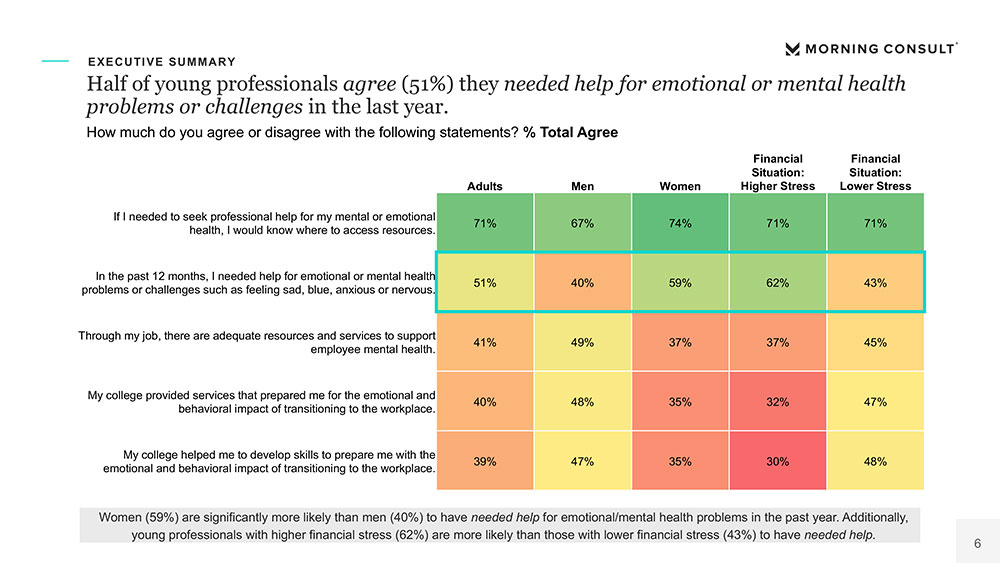 More than half (51 percent) of young professionals surveyed report having needed help for emotional or mental health problems in the past year. Forty-three percent screened positive for anxiety; 31 percent for depression. Women report worse mental health than men, with 68 percent of males self-reporting good or excellent mental health, compared to 45 percent of females.

Black and Asian American respondents reported better overall mental health than their white peers (60 percent and 63 percent, respectively, say they have good or excellent mental health, compared to 52 percent of white and 49 percent of Hispanic respondents). However Black respondents are less likely to feel part of the work community than their white peers (50 percent vs 68 percent) and are less likely to say they have colleagues who would support them if struggling compared to their white counterparts (52 percent vs 73 percent).

Burnout is a problem among young professionals, and it plays a role in their anticipated job tenure. 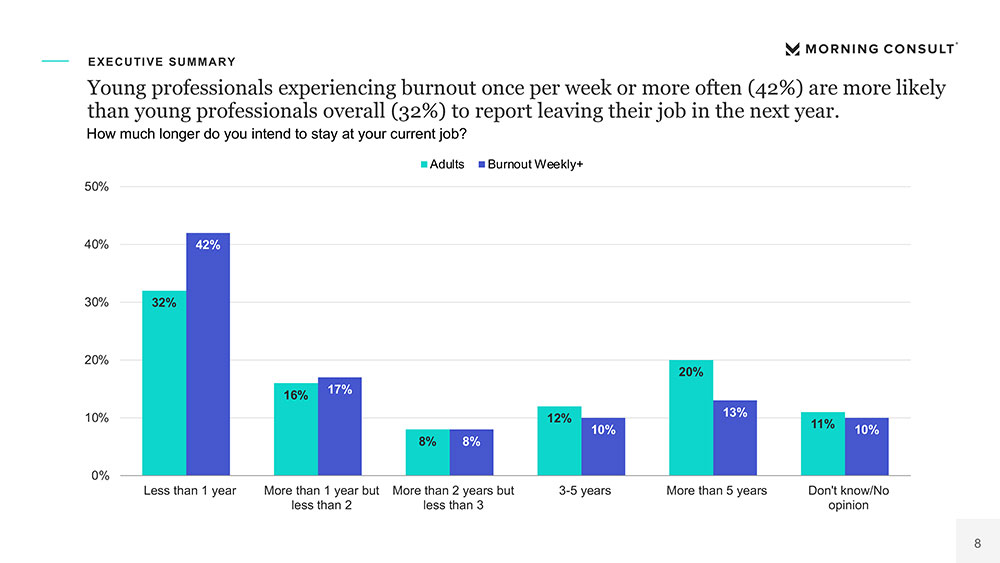 More than half of young professionals (53 percent) reported that they feel burnout at least once per week. (Burnout was defined as “a state of prolonged physical and psychological exhaustion, which is perceived as related to the person’s work.”)

Young professionals see their work environment as a negative contributor to their overall mental wellbeing.

More than a third (38 percent) of young professionals said that the environment at their workplace negatively impacts employee mental health and wellbeing.

Nearly half (45 percent) of young professionals believe their work environment has taken a negative toll on their own mental health in the previous year.

Nearly half (46 percent) of young professionals described their financial situation as always or often stressful.

More than half (56 percent) of young professionals with higher financial stress said that work had taken a toll on their mental health in the previous year, compared to 37 percent of those with lower financial stress.

College is not strongly perceived as preparing students emotionally for the workforce. 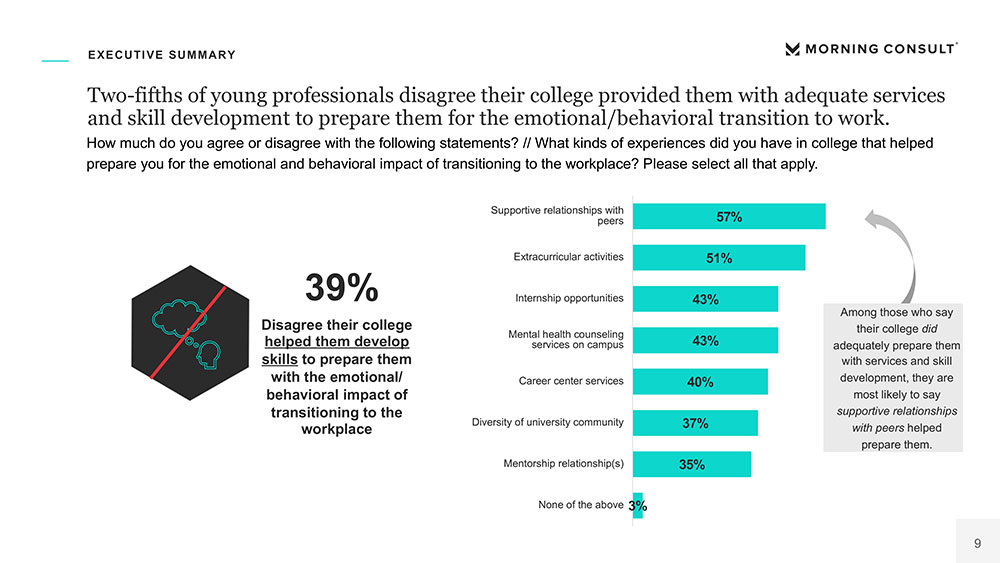 More than one third (39 percent) of respondents said their college did not help them develop skills to prepare them for the emotional or behavioral impact of the transition to the workplace.

Of those who believed their college did provide support (also 39 percent), majorities named peer relationships (57 percent) and extracurriculars (51 percent) as influential experiences.

Interest in mental health resources is high among young professionals, particularly if offered for free. 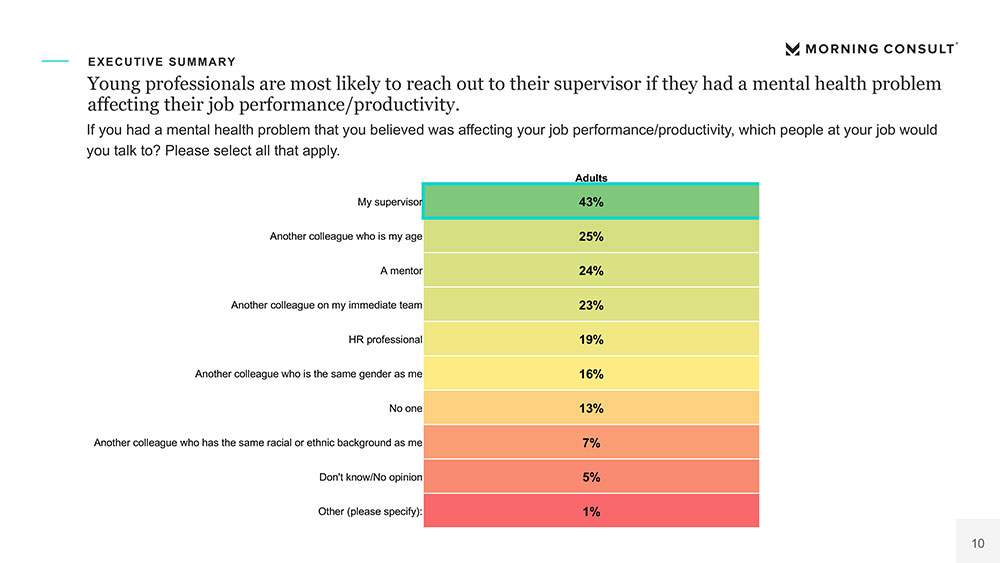 Those who reach out about their mental health feel near universal support from their colleagues.

Nearly a third (29 percent) reported having reached out to someone at work about a mental health problem they felt was affecting their job performance/productivity.

Of those who had spoken to someone at their workplace, 91 percent said the response from the person to whom they reached out was either very or somewhat supportive.

Supervisors seen as a primary confidant for mental health issues, though outreach not perceived as strong.

Almost half (43 percent) of young professionals reported they would reach out to their supervisor if they had a mental health problem that they believed was affecting their job performance/productivity.

A majority (65 percent) reported that their supervisor has either never (36 percent) or rarely (29 percent) reached out to them about their mental wellbeing.