On January 21, 2022, at the 2022 Impressions Expo being held at the Long Beach Convention Center in California, Graphics One will premiere an array of new products including new ink, new software, new systems, new printers and new finishing solutions. The array of new products that will be on display include the following:

One of the fastest-growing new printing technologies is direct-to-film technology and Graphics One will be a major participant. The technology was developed for fabric transfers and involves printing a special pigment ink to a coated PET film. While the ink is still moist, the special adhesive powder is applied to the ink. The film, ink and powder are cured (dried) using the hover capabilities of a heat press. Once the ink is dry, the film is placed on the garment and the transfer is made in a normal manner using a heat press.

The first system to be shown by Graphics One during the Impressions Expo will be the TransferMate DTF-814 which prints with CMYK colors and is meant for use with white and light substrates. GO has a family of DTF products in the pipeline including systems with CMYKW for black, dark and colored substrates to be introduced at a later date. The new components of the systems are as follows:

Making its first appearance in Long Beach, the 47-inch 3-in-1 oil-based calendar is the smaller version of the GO Xpress C-1700 Calendar. This high-performance calendar is just easy for everyone: easy to set-up, easy to use and easy to support. This unit will be shown working with both the Mutoh XPJ-1642WR and the Mutoh RJ-900X.

The Mutoh unit will be shown in conjunction with GO’s new Xpress C-1200 Rotary Calendar. 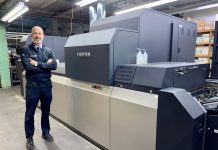 That Touch of Luxury