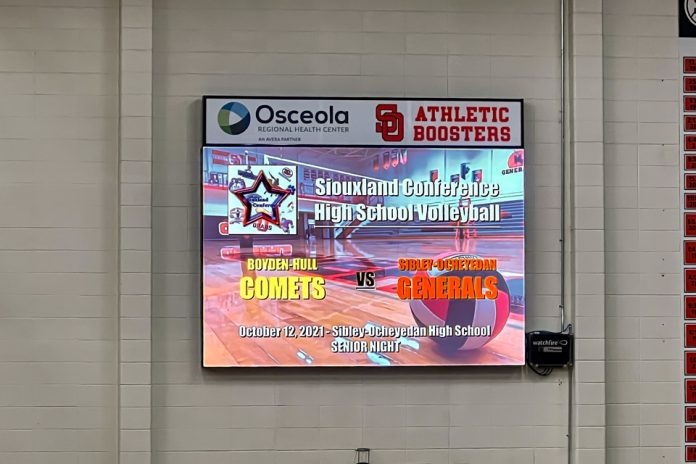 Sibley-Ocheyedan High School in Sibley, Iowa, is sporting a new LED videoboard in its gym, thanks to donations from Osceola Regional Health Center and the school Booster Club. The full-color, high-resolution scoreboard, measuring 6-feet-5-inches-by-10-feet, was manufactured by Watchfire Signs.

The video scoreboard looks like something you’d see in a college arena, according to James Craig, superintendent of Sibley-Ocheyedan Schools, a mostly rural school district of about 700 students in northwest Iowa.

“We’ve gone from a regular scoreboard to an interactive videoboard that can be used for different sports and events,” said Craig.

The school didn’t have to use district funds to pay for the new videoboard thanks to Osceola Regional Health Center, which paid for half of the cost of the display, and the Sibley-Ocheyedan Athletic Booster Club, which paid for the other half.

In return, both donors’ names are featured prominently above the videoboard. Osceola Regional Health Center also has ads that run during breaks. The Sibley-Ocheyedan Athletic Booster Club is allowed to recognize its members on the board and sell ads and naming rights for different parts of the games to help defray the cost of their contribution. So far the school has sold more than $14,000 in ads.

The school’s first use of the 2.9mm videoboard came during graduation, which was live-streamed onto the board as it happened. “We replaced the sound system at the same time, so the senior video was a great experience for students and their families,” said Craig.

The student community and fans have been positive about the new videoboard.

“The community really loves the excitement that the new videoboard adds to our games, and our supporters appreciate being recognized so visibly,” said Craig. “Students come up to me with suggestions and ideas for content and are quick to want to help.”

Installed by Rolling Sign Inc., of Sioux Rapids, this is not the first Watchfire display at Sibley-Ocheyedan High School. The school also has an exterior display from Watchfire that is used for school announcements.