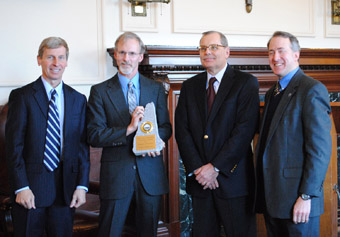 The Governor’s Award for Pollution Prevention recognizes outstanding pollution prevention practices in New Hampshire businesses and organizations that have successfully reduced or eliminated waste at the source.

Dimatix was lauded for eliminating over 2,100 gallons per year of hazardous waste Isopropyl Alcohol (IPA) and associated management costs by using an innovative vapor deposition method to replace a wet bath process. The company also has worked with its supply chain to ensure that pollutants such as lead, mercury, cadmium, haxavalent chromium, and hazardous fire retardants are eliminated from its products.

Dimatix also was recognized for having installed capacitors on its electric motors and adding an equipment-specific lubricant to compressors to extend their life.  From this initiative alone, the company is saving over one million kilowatt-hours annually—the equivalent of removing 792 tons of CO2 from the atmosphere each year.

“We are deeply honored to receive the 2010 Governor’s Award for Pollution Prevention and to be recognized for our persistent efforts to build a more sustainable business by employing practices that reduce pollution and waste,” said Joel Wood, vice president of Operations for FUJIFILM Dimatix, Inc. “During the past year, these efforts have also resulted in Dimatix having recycled nearly ten tons of paper, two tons of plastic, one ton of aluminum and tin, five tons of glass, and ten tons of cardboard. These and many other changes have required concerted and coordinated efforts within the company and stronger working relationships with our suppliers. With a common goal in mind, it’s clear that the results can be significant and the achievements can benefit both the environment and the bottom line.”

Dimatix is guided by a Fujifilm Group leadership policy of corporate social responsibility (CSR), the overarching goal of which is to help enhance the quality of life of people worldwide. This philosophy dictates using leading edge propriety technologies to provide top quality products and services that contribute to the advancement of culture, science, technology, and industry, as well as improve health and protect the environment.  This policy led Fujifilm Group to be ranked 177 in the Newsweek 2009 Green Rankings, which rates the 500 largest U.S. Companies on the sustainability of their practices.

For more information about the company, visit dimatix.com.

More information about the Governor’s Award for Pollution Prevention is available here.