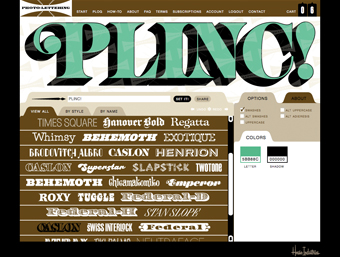 Before digital type, there was Photo-Lettering, Inc. A casualty of the digital publishing revolution, most of Photo-Lettering’s timeless alphabet styles and the proprietary techniques that accompanied them have lain fallow for decades.

House Industries, who acquired the collection in 2003, announces a new easy-to-use online service based on the original Photo-Lettering model.

Photolettering.com users will be able to purchase single settings for $7 each or for about $2 each through several subscription programs starting at $15 per month. The final product is a downloadable vector-based .pdf file that can be placed as art and edited in any drawing program.

At the time of launch, photolettering.com will include forty alphabet styles that have been optimized specifically for the online interface but the collection will be continuously refreshed with a constant flow of innovative new offerings.

“I’d love to keep all of these great alphabets for myself, because I’ve had a lot of fun with them over the past few years,” said House Industries Art Director Andy Cruz. “But it‘s time for them to get out there in the wild again.”

Many alphabet styles contain both automatic and user-controllable advanced lettering features not commonly available in conventional fonts or typographic systems. For example, Carlyle Eventide has eight separate colorable layers that can be a huge timesaver compared to creating similar effects in a conventional drawing program. Damico Gothic infinitely and artfully interpolates between condensed to extended and thin to fat, allowing thousands of possibilities from a single alphabet.

The original Photo-Lettering was a mainstay of the advertising and design industry in New York City from 1936 to 1997. PLINC (as it was affectionately known to art directors) was one of the earliest and most successful type houses to utilize photo technology in the production of commercial typography and lettering. The company is best known by most of today’s graphic designers for its ubiquitous type catalogs.

“The alphabet styles in this collection, many of which took over 200 hours to complete, were drawn with pen and ink to exacting standards by veteran lettering artists. I know, during my 35 years employed by Photo-Lettering, I produced over 500 complete alphabets. The acquisition of this collection represents historically the birth and death of an industry, but now I can rest assured that it will be preserved with dedication to the typographic arts,” said Ed Benguiat, former art director, alphabet designer and vice-president at Photo-Lettering, Inc. and past president of International Typeface Corporation.

Photo-Lettering is a partnership between House Industries, Erik van Blokland and Christian Schwartz. Please browse to http://www.photolettering.com/about/ for a brief Photo-Lettering history.

House Industries, based in Yorklyn, Delaware, is an independent type foundry and illustration and design studio that markets unique fonts and artwork to the worldwide advertising and design trades. Formed in 1993, House Industries is known for its unique display typography, elaborate theme-based font collections, and custom lettering for high-profile clients. More information is available here: http://www.houseind.com/about.