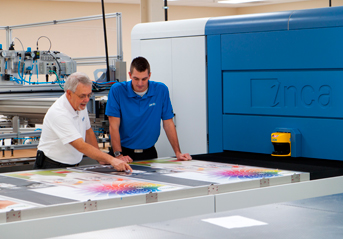 Jarob Inc. in Grand Rapids, Michigan is a sign company that has been in business for 41 years, and it’s solid business plan is one of the things that has kept it rolling for four decades. That business philosophy is to invest in technology to grow the business.

So when Jarob found themselves outsourcing jobs they could bring back in house, they decided to find a wide format digital inkjet printer that would work for their business in terms of high speed, productivity, and quality platforms. The company ultimately chose a six-color Inca Onset S40 with automation.

“From a sales perspective, we were outsourcing a lot of work to screen printers,” said Andrew Bishop, director of sales, marketing, and design at Jarob. “The S40 allowed us to go after more of that business and bring it back in-house.  We’ve brought about 80 percent of the outsourced work back already.

“The S40 gives us the advantage in the 500–750 impressions range,” continues Bishop. “We now have the ability to go after jobs we may not have bid on before, or jobs where our pricing could not be competitive.”

The Inca Onset S40 has given Jarob a four-fold increase in capacity, faster turnaround, and more competitive pricing, and the company plans on offering more services to its customers thanks to the printer’s capabilities.

In fact, Jarob unveiled its new printer during an open house for its customers and employees. With the new printer running side-by-side with the old, all of those present could clearly see the benefits of the new Inca. For example, jobs that took a week to produce on the company’s old printer (an Inca Columbia Turbo), now took just a day to turn around on the Inca Onset S40.

Samples the company sent out of their new capabilities also helped to generate buzz and bring in new customers. “The Inca Onset S40 definitely opened a door to increased business for us,” said VanPortfleet. “We let everyone in the area know about our new S40 and the spectacular work we were doing. Customers who previously said they were happy with their current supplier saw our samples and now want to talk to us.”

Thanks to this increased interest, Jarob sees plenty of growth in its future. “We’re seeing more customers this year than we have in other years combined, and we’re aggressively promoting Jarob and its new capabilities,” said Bishop. “Jarob was once a well-kept secret, but not anymore.  We’re confident the S40 is going to help us grow and expand the range of customers we service.”