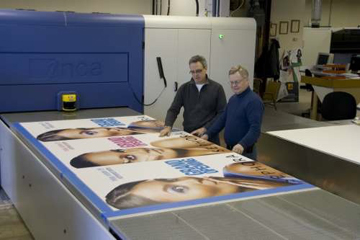 LightVisions began its quest for a large format flatbed in the spring of 2010, a necessity as the company was turning away a significant amount of large format work. Narrowing the search down to the Inca Onset S20 and a competitor, LightVisions ran extensive tests prior to making the investment.

“We have some very specific tests, such as ink usage, where we weigh material, make comparisons, and receive accurate feedback on consumables,” explains Allan Brooks, president of LightVisions. “While the two printers we tested were very close in terms of run cost/sq. ft., the big difference was that the Inca Onset S20 delivered higher quality at stated speed. We tested the speed with what we considered a quality mode for close viewing POP, and the Inca Onset S20 provided higher resolution and better detail with virtually no banding in the solids.”

The Inca Onset S20 at LightVisions, installed with the latest speed upgrade in August 2010, features a materials handling automation system capable of operation in manual, semi-, or three-quarter mode.

Available to all Inca Onset S20 customers, the upgrade boosted the rated speed more than 35% from its original speed of 45 beds/hour. “Inca told us that with the upgrade and in automation mode the Onset S20 would print at 62 beds per hour. We anticipated that the speed increase would mean a loss in quality,” says Brooks. “Instead, we were blown away by the quality. When we print jobs like fashion posters on 100 lb. coated stock at 62 beds/hour, the quality difference between that and running at 45 beds/hour is hardly noticeable.”

The Inca Onset S20’s ability to deliver both speed and quality was a “game changer” for LightVisions, requiring it to revamp its business plan. “We had not anticipated being able to run 62 beds/hour with fashion work for close viewing,” says Brooks. “Our thought was that the higher speed was only going to be good for outdoor signs and displays. Now we can pursue both: higher volume outdoor and larger retail accounts. This capability opened doors for us.”

According to Brooks, the Onset S20 printer is more than twice as fast as its other two flatbeds combined. A key factor in the Onset’s speed is its substrate handling automation, which can increase productivity up to 36% compared to manual handling. “We don’t have to wait for the machine to stop and the operator to take the sheet off and put on another one and line it up to register,” explains Brooks. “The sheets can be pre-positioned, stacked, and squared during the printing process, so when the printed sheet is removed, the next one is in position to be loaded.  When running manually, you have to take it off the printer and then square it up on the pallet.”

Brooks adds, “To be competitive with screen printers, you need the same capabilities to reduce costs. The automation is letting us compete with screen printers at much higher volumes than before. It has dramatically increased our productivity as there is now much less operator intervention. We have seen a large increase in number of beds per hour per operator over our existing UV flatbed printers. The output per hour is now also very consistent as there is less operator fatigue. We have noticed with our existing manual load machines that output per hour can vary greatly depending on operator ability and time of day. The impact of having this type of automation is huge.”

One recent project for a large national company illustrates the types of jobs LightVisions can now go after. “We just finished thousands of images for this large outdoor project,” says Brooks. “The entire job was 3,000 beds. We ran small and large pieces, hitting 62 beds an hour with automation. We ran multiple designs and multiple substrates, from translucent styrene, to card stock to MXM (synthetic paper), and there was complete consistency of print quality between products. We were awarded this project over bids from screen and litho shops and our margin was higher than our business plan predicted.”

The ability to quickly switch back and forth between manual and automated mode is also helping throughput. “Our operators really like the ability to switch over quickly,” says Brooks. “It is very fast, so if you have one 20-30 piece job and then another that’s running 500 pieces, you can switch from manual to automated easily.  You don’t need the automation for the 20-30 piece jobs—manual works just fine.”

The biggest problem with the automation feature is keeping the operator from getting bored, remarks Brooks. “We have a lead operator responsible for the machine operation and maintenance,” he explains. “When she arrives in the morning she calibrates the Onset and then the machine is running all day. The only thing we do is swap the operators, allowing them to do something else.”