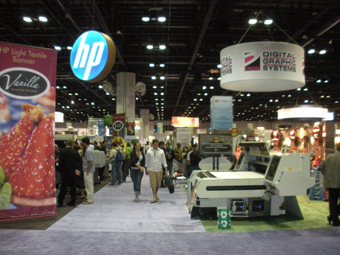 The ISA International Sign Expo 2011 being held in Las Vegas, Nevada is no gamble this year, as Sign Builder Illustrated found out from Brandon Hensley, vice president of Marketing & Sales for ISA. “The expectation is this will be the largest and most dynamic event in ISA history,” says Hensley. “This year we have worked to improve and create an experience for attendees and exhibitors.”

The show runs April 27-30 at the Mandalay Bay Convention Center, and Hensley gave us a glimpse into what attendees and exhibitors can expect.

An Experience Rather than a Show

According to Hensley, there are multiple elements that have helped to ensure that the 2011 International Sign Expo will be more than just a show for attendees and exhibitors. A number of events on the show floor, keynote and educational sessions, and a few changes to traditional features have all combined to make this a not-to-be-missed event.

This year, ISA is co-locating with the International Reprographic Association, which is the only independent association serving the reprographics industry and the architecture, engineering, and construction community. Members specialize in reprographic services, large format printing, finishing services, digital reproductions, and more.

“This group is a nice vertical audience for our large format print exhibitors and should provide added value to both Associations and events,” says Hensley.

Gen. McChrystal will speak on Thursday, April 28 from 8:00-9:30 am. He will address leadership and its key principles, and he will show how modern warfare, business, and politics demand no-nonsense leadership. The session currently has over 1,200 attendees registered, and was recently expanded to include space for 2,000.

“This is the first time in years that ISA has done an opening general session, so we are excited with the interest and registration numbers so far,” says Hensley.

Another session drawing big numbers is the meeting and networking event on Friday, April 29 from 4:30-6 pm, which allows custom and national sign company executives to meet, network, and potentially develop new business relationships. For the first time in ISA history, this event is sold out.

This year ISA is presenting its largest offering of educational sessions with over 70+ seminars available to attendees. Topics covered include estimating, legislative issues, digital imaging, digital electronic signage, installation/service, production/fabrication, and much more.

Co-hosted by Digital Designware, the third-annual vehicle wrap competition will take place live on the show floor throughout the Expo. Installers will compete in five rounds for thousands of dollars in prizes.

A live giveaway of a Harley Davidson Fatboy® motorcycle will take place on the show floor. Epson is sponsoring the giveaway, and attendees can fill out and drop off an entry form at Epson’s booth #1512. In addition, there will be live daily drawings for IPads and $1,000 in cash for attendees.

Sponsored by Nova Polymers, a Twitter Wall will be featured at the Expo. One monitor will be located in ISA’s booth #4326 and another monitor will be in Nova Polymer’s booth #3848. Both displays will be showing ISA’s tweets, as well as all those tweets with the hashtag #isa2011expo.

ISA has replaced the traditional help desk with the texting of questions. Attendees can now ask a question about the Expo from anywhere by texting it. ISA will be tweeting the top text questions, which will also be featured on the Twitter Wall.

Through the introduction of more interactive features such as the Twitter Wall, the help desk via text message, and the online conference brochure, ISA has hoped to attract more attendees and exhibitors. “When we analyzed our 2010 marketing campaign we decided that we needed to embrace even more of the various social media elements in order to grow the event,” says Hensley. “We have the understanding that there needs to be a strong balance and multipronged approach to our marketing so that we can leverage our message and allow our exhibitors and attendees to have access and share the message we are sending out in whatever format they are comfortable with.”

The tech-savvy efforts appear to be paying off as already 8,000 attendees have registered for the Expo. According to Hensley, this puts ISA 21% ahead of where they were last year at this time. “Realistically I would anticipate a 6%-plus increase in attendance, which will have ISA staging the event with over 18,000 attendees,” he predicts.

He also says that the Association is tracking over 200% for registration in over 70 education sessions as compared to this time last year.

The number of exhibitors is up, as well, with 556 exhibitors signed up at press time, which is more than the 495 exhibitors ISA had in 2010. Of these 556 exhibitors, 22% are new to the Expo. And according to Hensley, the currently 195,350-net-square-foot Expo floor is almost sold out—less than 1,500 net square feet remain.

Not registered for what is shaping up to be the second-largest show in ISA history? Head over to www.signexpo.org and register today!