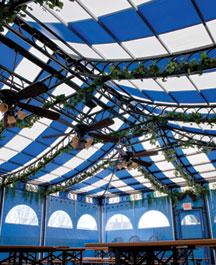 New Britain, Connecticut may not be the place you’d expect to find a Bavarian-inspired beer garden, but thanks to a recent awning job, the East Side Restaurant here can now boast this open-air feature. The family-owned restaurant serves up German-American fare to New Englanders, as well as an atmosphere of authenticity and the occasional “ticky-tocky” cheer.

The owners were looking to transfer this authenticity to the beer garden’s outdoor awning, so they turned to some local companies for help.

Getting a Seat at the Table

When Scott Massey, owner and president of Awning Cleaning Industries in New Haven, Connecticut, was brought in on the East Side Restaurant job by a client, his response was as robust as the ticky-tocky cheer. “It was interest at first sight,” he says.

The East Side Restaurant’s goal was to recreate a Bavarian beer garden on their outdoor patio. The owners even took a trip to Bavaria to study locations for inspiration. They came back armed with ideas and turned to Massey for help. “What they needed from me was insight into what would make the frame a better frame for putting fabric on it and keeping the elements outside, what I might suggest as far as attachments, and things like that,” he says.

Massey provided his input while a contractor built the iron frame for the beer garden, which measures 41 feet-by-29 feet and ranges from two to three stories high. He then turned his attention to the fabric for the outdoor awning. “[The owners] wanted to leave it up year-round, so the fabric had to be tough enough to take the elements on a long-term basis,” says Massey. “It needed to be able to not leak and be something that could be heat-sealed with the seams for the roof section so that there would be no stitch holes.”

Massey selected Weathertyte® Advanced Awning Fabric from the Cooley Group because of its eight-year warranty and outdoor durability. “It’s a nice pliable material, so if they wanted to do anything come wintertime, there wouldn’t be any issues with rolling up the curtain—even if it was in the colder weather,” says Massey.

Weathertyte’s color offerings were also a big plus for this project, as the client had a specific blue and white striped pattern in mind. “Weathertyte’s class of two colors were absolutely easy to sell to the client. Their white was very bold, and the blue was within a squint of exactly what [the owner] was looking for in the blue,” says Massey.

A Bit of Prep

With the frame in production and the fabric chosen, it was time to fabricate the beer garden’s roof and walls. The team visited the site and drew a pattern of the awning structure.

“We came back to the shop and cut and pieced the entire top with a one-inch overlap. Then we heat-sealed it all together,” says Massey. “Each panel had to be cut and formed to fit just right, which is no easy task.”

Since the client wanted no leaks, Massey had to make the awning all one piece. “If you start piecing these things together, you’re just adding more possible locations for water to penetrate,” he says.

Installation of the outdoor awning began with the roof. Because of timing issues, Awning Cleaning Industries had only one shot to get the roof right, without having a chance to test the fabric on the frame before it was installed onsite. It was all or nothing.

Using bakers scaffolding left up by the previous day’s painters, Massey and his team climbed high enough in the center of the framework to stand on the inner frame. They then worked on spreading the fabric over the frame. “We had to roll this in a certain way, so that when we got the fabric up onto the top of the frame, we could unfold it from each direction and then unfurl it in the proper way,” says Massey. “This isn’t something that we wanted to have to try to spin around a few times up on the frame.”

The East Side Restaurant’s thirst for detail was satiated with this project, because the team even heat-sealed blue and white pieces of fabric to cover the brown iron rods that run on the underside of the fabric roof. “We wanted to make sure you weren’t sitting there blinking, while looking at all these brown stripes going across,” says Massey. “So every single one of those brown pieces of crosseners—I’m going to guess it’s a dozen or more going across from the bottom lower edge to the peak—were heat-sealed and welded with the same fabric through the inside. And then we fixed those in place with matching painted head tek screws.”

To paint the tek screws blue or white, the team had to find paint that matched the awning colors. They then stuck the screws into a piece of Styrofoam® and sprayed them with the appropriate color before screwing them in.

After the roof was in place, the team went back and installed the sides and doors (which feature sewn-in, clear vinyl windows). The doors operate on a track system, which had to be simple enough for employees to use. The system incorporates a white zipper, a blue section of fabric, and a silver track system, which is all attached to a vertical pole on the frame.

“We created a track that would contain half the zipper on a regular basis. The other half of the zipper would be on the door panel around to the drop corner panel, so that you could never lose the zipper,” says Massey. “You just unzip both sides of it. Then we put a weight bar in the bottom that they would roll up manually.”

Installation along the back wall of the beer garden required careful planning, since it’s actually a wall of the restaurant. The top portion of this back wall uses a section of Weathertyte fabric to close the space between the roofline and the side edge of the frame. There was concern about snow load on this side, but the team had confidence in Weathertyte’s ability to withstand the toll of the weather. “We knew the top was going to be attached by a track. It was an aluminum track that we mounted and then put a vinyl welting tube onto the fabric, so that we could slide it in,” says Massey. This tracking system was used in combination with Tenara thread, which has a lifetime warranty and doesn’t deteriorate when exposed to the elements.

Before any of this work could be completed, however, an oversized, stainless-steel gutter system was installed to catch water pouring down from melting snow and rain.

Overall the project took about eight weeks to complete—a short amount of time for a job this size. But thanks to the efforts of all involved—as well as a built-in heating system in the floor—the East Side Restaurant’s patrons can now enjoy the experience of a Bavarian beer garden in their New England backyard year-round.

SGIA Amps Up THREADX 2018 with Innovative Roster of Speakers