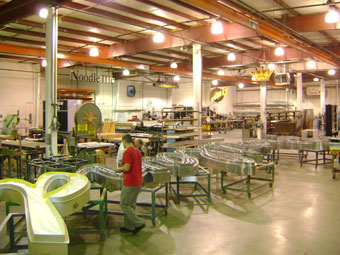 A sign’s purpose is to designate, guide, or inform, but sometimes it’s more than that.

A sign can also become an icon, as is the case for the city of Portland, Oregon and its sixty-year-old White Stag Sign. This 51-3/4-foot-tall-by-50-foot-wide city icon has inspired everything from tattoos to yearly holiday gatherings lighting the red nose of the sign’s stag.

Originally erected as a sign for the White Satin Sugar Co., the White Stag Sign has undergone many changes over the years to reflect the different lessees of the building it sits atop. The sign has advertised White Stag Sportswear and the Made in Oregon company. Most recently, it underwent its most important and difficult change—to advertise the city of Portland itself.

Ramsay Signs, a custom sign shop in Portland, Oregon, has been at the helm of the work to change the sign each time. Established in 1911, the sign company has always owned the sign and leased it back to the building’s current tenants.

But it wasn’t until 2008, when the company Made in Oregon vacated the building, that Ramsay Signs encountered its biggest challenge of all with the sign.

The University of Oregon leased the building and decided that it wanted the sign to instead read “University of Oregon.” This proposed change incited a flood of protests and complaints, which resulted in the city condemning the sign and threatening to take it as its own as public outrage increased.

“When it read ‘Made in Oregon’ it kind of was our own, but all of a sudden, you make it [very] personal and you say ‘University of Oregon,’” says Joe Gibson, owner and vice president of Ramsay Signs. (Note: Gibson has been with Ramsay Signs for thirty-three years; in 2010, he and his wife Wendy purchased the company.) “The city knows that this is out of control.

“So what is the only answer to making this go away? For it to say ‘Portland, Oregon.’”

With the sticky sign situation diffused, Ramsay Signs set to work on making the change happen.

They almost immediately ran into a challenge when they tried to retrieve data and specification information from the last site survey of the sign. “We had done such an extensive survey when we changed the sign to Made in Oregon,” says Gibson. “What was really catastrophic was some of the files from that original build in ’97 were corrupt.”

Ramsay Signs had to go back and recreate many of these corrupted files, before work could begin.

Once this information was in hand, the sign company focused on designing the letters of the new “Portland” portion. This was the only element of the sign that would be changed.

“All we really did was take the ‘Made in’ down and put ‘Portland’ up,” says Gibson. “And that was so much of the conditions of the historical review committee—which was you’re not going to touch this more than you have to.

“So all the border stayed, the stag stayed, and the ‘Oregon’ was not touched.”

Fabrication of the Portland letters may have been the only work that needed to be done, but it presented problems in and of itself.

“When it said White Stag, they had their own lettering style,” says Gibson. “And to change it from White Stag to Made in Oregon, we had to use that same style, according to the historical society, to keep it somewhat similar,”

“So when we took that ‘Made in’ down, we had to recreate the ‘Portland’ [in a similar lettering style]. I think it probably went back and forth six times.”

The fronts, backs, and returns of the open-pan channel letters were all made out of .090 aluminum, and the inside of the letters were painted with white Matthews Paint.

Letter illumination of the sign is a combination of neon and incandescent lighting. Green EGL neon outlines the letters, while the infill is made of 11-Watt S14 clear incandescent bulbs. The incandescent bulbs illuminate in a chasing sequence, which is controlled by a mechanical speller manufactured by FMS Corporation.

All of the wiring and installation of the incandescent bulbs and neon tubes was performed in the shop before the letters were brought out to the job site.

Installation of the letters took place over seven days with five installers. Using a crane, the letters were lifted up from the street below and (individually or in groups of two to three connected letters) clipped onto the grid-like frame of the sign.

“From the survey, we knew where all the lateral and horizontal members of the structure were,” says Gibson. “Using the CAD program, we placed those onto the backs of the letters, so when the crane picked the letters up, it literally just hooked onto the existing frame.”

“Layout is so key to making something like that work.”

“The clips sit down on the horizontal frame, so when the bolts are tightened, the clips clamp onto the frame,” says Gibson.

Despite working in harsh and dangerous conditions, the installers completed the job on time and without major incident. Even a wind storm—which forced the installers to delay the project a day—didn’t prevent them from having the sign installed in time for the start of the 2010 holiday season.

“One of the things that I was very pleased about was every day onsite there were extensive tailgate meetings about how dangerous this was and how safety was the number-one concern,” says Gibson. “For five guys hanging off of a 2-by-12-foot plank for a week and nobody getting injured, that’s always a wonderful thing to [achieve].”

Overall the entire project took about eight weeks from the start of design to the end of installation.

And the city of Portland, Oregon can add another accolade to the history of its already-storied sign. This year, the sign won ISA’s 2011 Sign Design Competition in the categories “Best of the Regions” and “Historic Reproduction.”

“For the one hundred years that Ramsay Signs has spent designing and producing the finest signs in the country, we are honored to be recognized by our peers in the sign industry,” says Gibson. “The Portland, Oregon sign is an icon for the city.”